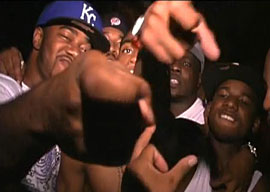 Why has the American media suddenly snapped out of a self-induced coma to pay attention to the Knockout Game? Gullible journos are acting as if it’s a spanking-new phenomenon that is sweeping the country, but the practice of black wolf packs cold-cocking pedestrians for cheap thrills has been going on for years. The only thing that’s sweeping the country is the media’s sudden willingness to talk about it. And not only are they talking, they’ve also dropped dog whistles such as “youths” and “teens” and are openly noting the assailants’ and victims’ race. What was the tipping point?

Some will quibble whether it’s actually a “game” or a “ritual””they say calling it a “game” trivializes something that has led to several deaths”but it basically involves walking up to an unsuspecting individual and punching them hard enough to knock them unconscious. You’ve won the “game” if you knock out your target. Although typically only one member of a group throws the knockout punch”or they take turns until one of them sends the victim to sleep on a concrete bed”this game is almost always performed by packs of black males apparently seeking to impress one another. Whichever lucky individual delivers the knockout blow wins the crown of “Knockout King.” Robbery is hardly ever a motive. It appears to be done for fun, to establish ingroup status, and to send a clear message about who rules the streets. Throughout history, those who rule the streets have often served as the shock troops and enforcers for those who rule the nation. This isn’t some empty nihilistic ritual”it’s a highly political act of establishing dominance and marking one’s territory.

Mobs who prey upon the weak are nothing new, although the fact that it’s black mobs preying almost exclusively on non-blacks is a fairly recent historical wrinkle. Back in the 1980s the cases of Bernhard Goetz and the Central Park Jogger introduced America to the term “wilding” to describe self-orchestrated black group mayhem. Over the years, the more specific practice of sucker-punching an 80-year-old man to impress your 15-year-old friends has been called “One-Hitter Quitter,” “Catch and Wreck,” and “Point-em-out, Knock-em-out.”

In Illinois a spate of such attacks from around 2008-2010 was known among perps as “Polar Bear Hunting,” most likely because the victims were targeted for being white.

The Midwest appears to be America’s most fertile ground for the Knockout Game. In Columbia, MO, parking-lot surveillance video from 2009 shows a group of black attackers approaching a young white male and one of them creeping up from behind to fell him with one blow. The victim suffered whiplash, internal bleeding, and bruising of the brain.

In St. Louis, the game is more commonly referred to as “Knockout King,” with attacks going back as far as 2006. One judge allegedly claimed that a single individual was responsible for an estimated 300 such attacks. There was an infamous 2011 incident where the city’s mayor pulled up to the scene of a game of Knockout King as it was unfolding.

In April of 2011 a 72-year-old Vietnamese man in St. Louis was sucker-punched by a black male teen and fell to the ground, fatally cracking his head.