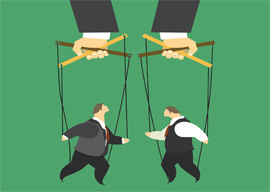 I picked a bad day to talk to Dick Tofel. Although, to be fair, I’m not certain there’s ever a good day to talk to Dick Tofel. But without question, last Friday was a bad day for such a conversation. It was one hundred degrees in the shade, the peak of L.A.’s worst heat wave in years, so I was already hot and sticky. But by the time I got off the phone with Tofel, I felt especially filthy. Dick Tofel is the former assistant publisher of The Wall Street Journal. These days, he serves as president of something called ProPublica, a “journalism” (in my entire career, I’ve never used scare quotes with greater assuredness) website that promises “investigative journalism with moral force.” See, they’re left-of-center, so they can get away with invoking “moral force.” If they were conservatives, they’d be attacked because, like, don’t try to force your morality on me, man!

Over the past few weeks, ProPublica has been using its “moral force” to get “hate sites” dropped by the tech companies that host their websites and process their credit-card transactions. I was initially informed about this by my longtime friend Mark Weber, director of the Institute for Historical Review (IHR). He forwarded me an email from ProPublica “journalist” (okay, now I’ve never used scare quotes with greater assuredness) Lauren Kirchner. Here it is in full:

I am a reporter at ProPublica, a nonprofit investigative newsroom in New York. I am contacting you to let you know that we are including your website in a list of sites that have been designated as hate or extremist by the American Defamation League [sic…fucking moron] or the Southern Poverty Law Center. We have identified all the tech platforms that are supporting websites on the ADL and SPLC lists.

We would like to ask you a few questions:

1) Do you disagree with the designation of your website as hate or extremist? Why?

2) We identified one tech company on your website, Transaction Express. Can you confirm that you receive funds from your relationship with them? How would the loss of those funds affect your operations, and how would you be able to replace them?

3) Have you been shut down by other tech companies for being an alleged hate or extremist web site? Which companies?

4) Many people opposed to sites like yours are currently pressuring tech companies to cease their relationships with them – what is your view of this campaign? Why?

Our deadline is 5pm EST today.

Kirchner’s email reminds me of when a Mob enforcer would pay a “friendly visit” to a local business to intimidate it. “Nice publishing company you got here, Weber. It would be a shame if something was to, you know, ‘happen’ to it.”

“Anyone who actively tries to shut down a place where books are printed has no business identifying as a journalist.”

Other organizations received similar emails from Kirchner, but for the sake of this piece, I want to focus on the IHR alone. The IHR has been around for almost forty years. It’s an educational nonprofit publishing house. Do I agree with every book the IHR has published? Of course not. And so what? My own publisher, Feral House, puts out books in which authors express points of view that run contrary to my own. Good. I’m against censorship across the board, even when it comes to actual hate sites like the Daily Stormer. But anyone who actively tries to shut down a place where books are printed has no business identifying as a journalist.

Kirchner’s article (co-written with fellow “journalists” Julia Angwin, Jeff Larson, and Madeleine Varner) was posted on Aug. 19. On the 21st, TransFirst/TSYS, the IHR’s credit-card processing company, sent a letter to Weber informing him that the IHR was being dropped and its merchant account closed. The reason? “The review of your website revealed that your business is excluded per our credit policy, materials promoting hate, etc.”

For the record, several years ago it was TransFirst that actively sought the IHR’s business.

So just what is ProPublica? ProPublica is the malformed child of Herb and Marion Sandler, the infamous and corrupt left-wing billionaire Democrat donors. Even liberal press outlets admit that they were among the most prominent driving forces behind the Great Recession of the late 2000s (Time magazine included them on its list of the “25 People to Blame for the Financial Crisis”). The Sandlers started ProPublica with an initial welfare check of $10 million, and a promise of another $10 million annually. At the time, Slate.com speculated that ProPublica would likely serve as a mouthpiece for the Sandlers’ left-wing views.

The Sandlers are also the farbissiners who used their influence to force NBC to censor a sketch on Saturday Night Live, after they were described on the show as being “people who should be shot” (yes, the Sandlers are so vile that even the leftists at SNL hate them). Marion Sandler died in 2012, and Herbie continues to serve as ProPublica’s founding chairman.

Regarding what happened to the IHR, what we have is a faux-journalism institute funded by left-wing billionaires deciding to engage in 21st-century book-burning by putting a publishing company out of business. For well over a week, I reached out to Lauren Kirchner, the harlequin who wrote the shakedown emails. Her ProPublica email address had apparently been disabled, and her personal website had been taken down (it was last scraped as active by the Wayback Machine on Aug. 6). From archived screenshots, I was able to get her Gmail address. The sunken-eyed ghoul never replied to a single email I sent. This is why Kirchner is not a journalist in any sense of the word. Knowing that she was about to ruin a bunch of lives, she most likely deactivated her work email and took her website down in order to hide from the repercussions. She has since restored her website, sans her contact info, which has also been scrubbed from her ProPublica bio page (for the record, it’s [email protected]). She’s a coward.

To be honest, I’d only wanted to ask Kirchner one simple question. Last November, she approvingly tweeted an NPR story about how better off everyone would be if they read books from opposing political or ideological viewpoints. “Here’s a nice thought: ‘One Way To Bridge The Political Divide: Read The Book That’s Not For You,’” she wrote in her tweet. All I wanted to ask her was, “Before you helped kill the IHR’s ability to sell books, had you ever actually read anything it’s published?” Not only did Kirchner hide from my emails, so did the coauthors of her piece.

But Dick Tofel, president of ProPublica, did not hide, and I’ll give him credit for that. After receiving an email from me about Kirchner’s evasiveness, Tofel invited me to call and chat. And that’s what we did that hot and sticky afternoon last week. According to Tofel, his team’s vaguely threatening emails and tech-company-shaming “exposé” had nothing to do with the IHR (or any other org) losing a server or credit-card processor. He actually had the gall to tell me that he believes TransFirst, completely on its own and without a thought given to Kirchner’s emails and ProPublica’s story, searched its conscience and decided to drop the IHR because the CEO had a Scrooge-style overnight change of heart. The fact that TransFirst’s “change of heart” occurred just two days after the ProPublica story? Coincidence!

“We just report,” Tofel told me. I pointed out that his “reporters” were not covering a story, they were creating one. They had a stated goal. “That’s what investigative reporters do,” Tofel replied. And he’s right. But the honest ones admit when they’ve had an impact. Deep down, Tofel must surely know how bad it looks for a journalist to assist in the censoring of political ideas. So he lies, he denies his influence. He blames it all on the ghost of Heather Heyer visiting the TransFirst CEO in the middle of the night.