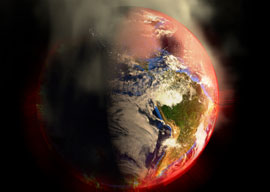 Board up the TV screen and plug your ears with seaweed, boys!

Hurricane Gore is about to come ashore with another gale-force climate sermon. Interviews that the former next president has been giving suggest 24 Hours of Reality is calculated to make markets crash. The question is: Which ones?

Al Gore has already told fellow communitarian climate maven Joe Romm that public and private investment must be bent to the view that fossil fuels are best left in the ground:

There are $7 trillion worth carbon assets on the books of multinational energy companies….The valuation of those companies and their assets is now based on the assumption that all of those carbon assets are going to be sold and burned. And they are not. The global scientific community has just reaffirmed that No [sic] more than one-third can ever possibly be burned without destroying the future.

This carbon bubble is going to burst….People can make short-term profits by playing the psychology of the markets. But if you’re a long-term investor and you do not take into account the stranded-assets potential for carbon-based equities and debt instruments, in my view you’re making a mistake.

Romm concludes that divesting endowments from fossil-fuel companies is “not just the morally right thing to do for a university, foundation, or pension fund”it was a financially smart move for any such long-term investor.” The markets appear to differ, perhaps because analysts have run some inconvenient numbers.

Legitimate as concern over oil imports and climate change may be, domestic fossil-fuel production has been ramping up, and America has, wonder of wonders, become the world’s largest energy producer.

This may be bad news for posterity, for however slow, manmade climate forcing remains as pernicious as inflation; but in terms of letting the present generation live long lives, there is a case for civilization continuing to indulge in the use of fire. Americans generate over 20 tons of carbon dioxide annually, Kazakhstanis over 13, Israelis over 10. Even though sorely handicapped by their nuclear electric system, the French manage a respectable six tons per capita.

Still, there are laggards, nations so backward that they are not pulling their weight in the race to outdo nature as a source of climate change. Despite India’s burgeoning economy, its billion citizens added a feeble two parts per million of CO2 to their share of the world’s air each year, while Pakistanis barely manage one.

Burning under three pounds of fuel a day for all purposes from cooking and heating to transport may seem austere to some, but Deep Greens deem even the carbon footprint of a Cuban campesino shockingly profligate. Seeking to reverse increases in gases that warm the planet, they applaud Al Gore’s demand for a 90% cut in US CO2 emissions by 2050. This means America must undercut the fuel economy of sunny Iraq at ~3 tons per capita of CO2, or Cuba at 2, and emulate the few, the proud nations that have become avatars of Earth Day by emitting less than a ton of CO2 per capita annually.

Which one to aim for is for democracy to determine, so before you vote Green or emigrate this Election Day consider this list of ten low-cal nations whose cool energy example America can follow into a central-heating-free future: