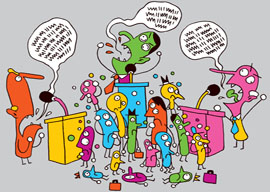 The hellstorm of protests that greeted Milo Yiannopoulos on the UC Berkeley campus wasn”t nearly as disheartening as the flood of pro-censorship op-eds that poured from the pages of the Daily Cal newspaper in the days that followed. The anti-Milo riots could (in theory) be dismissed as the work of “outside agitators.” But the op-eds? No way can they be seen as anything other than the sincere feelings of actual Berkeley students. These little geniuses all pretty much toe the same line, and it’s a familiar leftist line, going back decades: “Hate speech” isn”t protected speech. It doesn”t matter how many constitutional scholars and legal experts tell them they”re wrong, that “hate speech” is indeed protected speech. These soft-skulled millennial simpletons are told by their professors every day that “facts” are, like, anything that makes you feel good, man, so the words of ignorant “grups” who have wasted their lives studying constitutional law when all they really needed to do was watch The Young Turks (duh!) fall upon deaf ears.

The pro-censorship arguments advanced by today’s SJWs fall into two neat categories: “Hate speech is incitement,” and “Hate speech equals violence.” The former is summarized in a cartoon that has been making the “Antifa” rounds the past few weeks. At a political debate, a strong, fit Nazi promises to murder the family of a young proud female person-of-color LGBT (or at least Q) SJW. The SJW, realizing that this monster must be stopped, as he has directly threatened to murder her family, wisely chooses to eschew debate, and she heroically beats the Nazi with a baseball bat. The message? Don”t engage in a war of words with someone who has made it clear that they”re going to murder you.

Unfortunately, there’s a little problem with that analogy: Milo and his fellow travelers never threaten to kill anyone. “I have a right to strike first because you”ve threatened violence against me” only works if the other person has actually threatened violence against you. People like Milo don”t do that. Rather, leftists infer violent threats from his words, and we all know how good leftists are at sussing out amazing discoveries the rest of us have somehow missed. I mean, leftists are the ones who “discovered” that breakfast is racist and air-conditioning is sexist. When SJWs claim to find hidden murderism in Milo’s views about political correctness and entitlement, they”re just doing what they do best”remaining blind to their own confirmation bias while seeing things that just don”t exist.

Sensing that Milo’s “murderous threats” are a Great Gazoo that only the Fred-and-Barneys of the left can see, a separate bunch of SJW loons has taken a different approach, claiming that direct threats of violence from people like Milo aren”t needed in order to prove the “self-defense” case, because hate speech is itself violence. According to this argument, hate speech inflicts violence on its victim no less than would a gun or a baseball bat. Hate speech is real physical violence, not figurative violence. Leftists who advance this argument are not claiming that Milo threatens violence, but rather that he has already committed violence just by speaking. This is a clever approach, because a threat is still just a threat (i.e., a forewarning of something that hasn”t happened). But if words equal violence, then the speaker is of course a legitimate target for violence in self-defense, because he’s already “hit” first, he’s already struck the first blow.

The night of the anti-Milo riots, I got into it on social media with a bunch of those “speech equals violence” nutcases. They bombarded me with bullshit essay after bullshit essay from reality-disconnected leftist “philosophers” to “prove” that hateful speech is no different from physical violence. So I issued a challenge, the same challenge I always issue to anyone who claims that language equals violence. And it’s a very simple challenge: Come with me to a hospital, any hospital, and find a victim of physical violence. Someone who’s been shot in the face, or stabbed in the eye, or similarly maimed. Now stand in front of that person and say, “Someone called me a bad word. That makes me a victim of violence just like you.”

Amazingly, no one took me up on my offer. My streak remains unbroken; I”ve issued that challenge to a good hundred people in the course of my life, and not a single “language equals violence” cretin has ever taken me up on it.

What I found most compelling as I watched UC Berkeley erupt in violence, and as I read the dozens of op-eds and letters from students demanding a curb on “hate speech,” is how willingly people can be persuaded to give up their rights, as long as an argument is made that appeals to their preexisting ideological biases. Because before any of you right-wingers get on your high horses, keep in mind that “God Emperor Trump” has called for the criminalization of American flag burning. Granted, it’s a moot point, as the Supreme Court has weighed in definitively on the issue (and nobody argued more forcefully for flag burning as protected speech than Justice Scalia, so if Neil Gorsuch really is another Scalia, don”t expect a sea change on the court regarding that topic). But all the same, a lot of conservatives cheered Trump’s call to jail flag-burners.

That took me back to 1989 and Texas v. Johnson, the case that settled the flag-burning question. Little Joey Johnson, a self-described “revolutionary communist,” burned an American flag in protest of whatever (seriously, who gives a shit?). The state of Texas arrested him under a law prohibiting the “desecration” of the American flag. SCOTUS set “em straight, conservatives weren”t pleased, and the GOP (with some Democrat support) pushed through the Flag Protection Act of 1989, which was (predictably, as the Justice Department admitted the act was unconstitutional) shot down by SCOTUS in 1990. But conservatives have never let the issue go, and polls taken following Trump’s statements about recriminalizing flag burning showed that there is still overwhelming support for such a law, especially among Republicans.

Back in 1989, I tried my best to reason with my fellow GOPs about why they were wrong. I would start by giving the example of a conservative friend of mine, a fundamentalist Christian who was all hot-and-heavy in favor of Tipper Gore’s attempts to ban (or at least curtail) “harmful” rock music (note to millennials: Long before Al Gore discovered the internet, and longer still before he realized the planet was on fire, he and his wife thought the greatest threat to mankind was rock music). Now, this good Christian conservative, skeered o” the devil as he was, thought that “satanic” rock should be banned, lest it take his soul. I would explain to my “ban flag desecration” friends that, were I the devil, and were I looking to steal the soul of a 70-year-old fundamentalist Christian farmer from Nebraska, I would not try to tempt him with a fucking Samhain album. I”d come to him in a form he”d find seductive, not one he already finds abhorrent.

That’s what the devil does, see? And that’s what government does as well. When the state wants you to surrender certain rights, it comes to you with an offer that appeals to your biases. The rightists back then who supported a federal ban on flag desecration envisaged a future America in which scumbags like Joey Johnson were put behind bars for their sacrilege. But “desecrate” is a very vague term. It means “to treat disrespectfully, irreverently, or outrageously.” If you give the government the power to imprison those who “desecrate” the flag, who will be the ones in charge of defining desecration? Politicians. And who will be the ones in charge of affirming the laws? Judges. So how exactly do you think politicians in, say, California would define desecration? I”ve seen plenty of conservative pamphlets and posters in which a leftist could argue that the American flag is used “disrespectfully, irreverently, or outrageously,” including pro-life flags on which a fetus replaces the stars, and gun rights posters on which the flag is covered by firearms. Politicos in blue states would certainly define those as desecrations, and the far-left Ninth Circuit would happily uphold that definition.