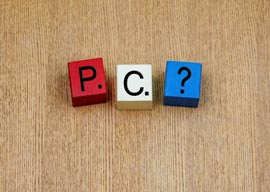 Political correctness. The dreariest, most depressing and dismal words in the English language, almost as depraved as the word “hype.” The apostles of P.C. claim to teach tolerance and diversity, but heaven help anyone with thoughts sufficiently independent and diverse to disagree with them.

There is nothing more venomous than the hate-hype vipers, slithering far and wide, thus posing a danger nearly everywhere. Any speech they hate is “hate speech,” and any group they hate is a hate group. Given their totalitarian mentality, it is not surprising that they obsess over “hate crimes.” (A crime is by nature a hate crime, but these pedants insist on separating the two in order to score brownie points where P.C. is concerned.) If we continue down the way we”re now going, soon all speech and associations the P.C. Nazis deplore will be matters for the police to handle. Welcome to George Orwell’s 1984.

Liberty depends on memory. Cutting people off from their past and discrediting our ancestors are the chief techniques of modern tyrants”as in the politically correct. In a P.C. world, humor is a capital offense, yet the two traits humor cannot resist offending are pomposity and self-satisfaction, both P.C. templates. Finally, P.C. is nothing but a manifestation of the permanent spirit of inquisition. There, I”ve said all there is to say about this intolerant system.

“With the arrival of the most annoying and malevolent invention since television”the Internet”hype now has expanded from the upper regions of stardom down to include almost everyone.”

Which brings me to another word I”d love to see excised permanently from the syllabus: Hype. It is a word aggressively in tune with the times, a hard sell in the works. Hype works in an artificially engendered atmosphere of hysteria in order to create a demand for a product or a person. Hype derives from the Greek word hyperbole, meaning excess and exaggeration. Its object is money, power, and fame. There is nothing elegant about hype and very little truth in it. Hype routinely debases language and exists in a universe where everything is fabulous. All fashion is hype, and all conversation about fashion is hype. Hype manipulates taste as it vitiates our ability to discriminate. Hype has made many careers that were and are based on nothing.

Take Bianca Jagger, for example. An untalented woman, she has managed to keep her name on bold-faced script purely through the hype put out by her press agents. She doesn”t act, does not sing, is not particularly well read or schooled, for that matter, but she’s on all sorts of committees that tell the rest of us what is good and what is not so good. I believe these pests are called activists, another word that should be abolished once and for always.

Hype, like propaganda, is a conspiracy against the rest of us. Hoodwinking the public is hype’s premier task. Politics is all hype. Selling books is all hype. Filling a stadium for a rock concert is all hype. How the hell does a hairdresser become a star and get invited to stately homes except through hype? Movies become profitable through hype; even royal families use hype. Hype makes a mockery of humanity.

We call druggie, ugly as sin, dirty, untalented rock stars gods because of the hype their P.R. flunkies have generated. Women faint when touching dwarfish movie stars who mumble and dress like homeless people because of the hype concerning their person. We no longer believe in God so we keep inventing extremely poor imitations of him in our celebrity culture. Celebrity itself is one big hype. One of the very few heroes who sought to escape his celebrity, the first man to fly across the Atlantic, the great Lindbergh, was vilified like no other man because of his unwillingness to hype himself.

Once upon a time, a cornucopia of gossip columns, movie magazines, and television programs covered so-called celebrities. These were film stars, sport stars, and cafÃ© society playboys and playgirls. No longer. With the arrival of the most annoying and malevolent invention since television”the Internet”hype now has expanded from the upper regions of stardom down to include almost everyone: businessmen, publishers, pop musicians, cosmetic tycoons, fashion designers, fashion designers” assistants, fashion designers” bum boys, record executives, gay liberationists, transgender activists, porn stars, plastic surgeons, victims of plastic surgeons, fashion victims, celebrity criminals, gossip columnists, gossip columnists” assistants, professional confessional autobiographers”you name it, hype has made it famous. Late night talk show hosts are now on any A-list of the White House, 10 Downing Street, and the ElysÃ©e Palace. Nobel Prize winners are way down on the sliding scale of fame and celebrity. Even famous criminals outrank them, like some IRA killers now making the rounds.