I Could Have Been Such a Charming Serial Killer 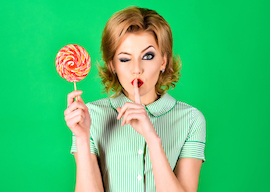 CLEVELAND—Back in my acting days, I always wanted to be cast as the boyfriend/husband/charming-stranger-from-out-of-town in a Lifetime Movie of the Week. Who wouldn’t want that job? You get a great wardrobe in the early scenes, then, when the heroine finds out your nasty secret, you get to chew scenery, orchestrate a kidnapping, blackmail most of the cast, and use cruel weapons until you plunge to your death, burn up in a fiery wreck, get repeatedly stabbed as you rise again and again to terrorize the woman you love, or suffer 77 bullet wounds from the Nice Savior Replacement Boyfriend nobody remembers.

Unfortunately I never got to go full-bore Ted Bundy, partly because the Lifetime Network changed all the rules.

After years of making movies with titles like Alone With a Stranger, Heart of a Stranger, Intimate Stranger, Stranger at the Door, Stranger in My Bed, Stranger in Town, The Familiar Stranger, The Stranger Beside Me, The Stranger I Married, and Total Stranger—yes, those are all actual Lifetime movies—they abruptly stopped making Smooth-Talking Serial Killer stories, and all the good male roles were replaced by Psycho Bitches.

Admittedly Lifetime Psycho Bitch movies are some of the best low-budget horror films of the past thirty years, but a woman who steals your baby—or, better yet, tries to carve the baby out of your body when you’re eight and a half months pregnant—falls a little short in the terror department simply because everyone in the audience knows that Mom must be reunited with her infant at the 1:57 mark. Leaving a baby in peril, or showing the death of a child, is one of the last real taboos of television and film. Even a baby stricken with a rare disease must be miraculously cured by either science or God prior to the credit roll.

“The refusal to acknowledge reality in the third scene is what leads to having three butcher-knife wounds in the final scene.”

Of course, you can’t really feel sorry for the imperiled suburban woman with a Psycho Bitch bearing down on her because her women’s intuition told her this chick was bad news in the third scene. She thought it was a little weird that the woman carries a pistol in her purse, but accepted “Oh, it’s nothing, I’m from Kentucky” as a reason to ignore her own instincts. The message here, I think, is…emotionally smart, intellectually stupid. Their intuitive powers are telling them “Danger! Danger!” and their minds are telling them “Be polite.” The refusal to acknowledge reality in the third scene is what leads to having three butcher-knife wounds in the final scene.

At any rate, let’s analyze what the Lifetime Network is trying to tell us about women.

There was a time, back in the ’90s, when the main danger to women was…men. Especially young men attached to out-of-control daughters. Hence Mother, May I Sleep With Danger?, one of the iconic stories of that decade, has Tori Spelling ripped away from her family by a psychotic boyfriend. Kirsten Dunst disrupts her family in Fifteen and Pregnant when her boyfriend knocks her up then disappears. And, of course, the all-time classic Not Without My Daughter purports to be a story about a brave woman fighting to bring her child home from Iran, but at root is about a heartless husband and father who destroys a family and attempts to rob Mom of her daughter by criminal actions aided and abetted by a society and culture that is demeaning to women.

So…men can’t be trusted, they’re all abusive, they all have secrets, they’re ungrateful, they’re users. But apparently this was not enough jeopardy for the Lifetime Woman.

Enter the women who murder cheerleaders, exemplified by The Positively True Adventures of the Alleged Texas Cheerleader-Murdering Mom, an HBO movie that quickly became fodder for a series of plots featuring conniving murderers in the guise of Welcome Wagon housewives. (Death of a Cheerleader, the Lifetime version of the story, was more about mean girls than mean moms, but the point was the same.) These were women who were not that crazy but so eaten up with jealousy that they would do anything to improve their standing in the community, including the violent elimination of any woman with a better public image. But here’s the interesting rule about this particular subgenre: The evil woman must always be prettier and more popular than the good woman. You would think it would be the opposite—that the homely underachiever would be full of pent-up rage—but these are women who are basically Black Widows using their dark powers on women instead of men. Sometimes the jealous outsider is an ex-girlfriend of the boyfriend or husband, sometimes she’s a stalker, sometimes she’s a boss or a mentor, but her single-minded determination to eliminate the innocent protagonist must result in a Catfight, preferably one with deadly weapons—wait, excuse me, Girlfight—and the evil woman must go to jail in the final scene. I’m not sure why an evil woman goes to jail while an evil man must always die, but hey, that’s the format.

It also helps the evil intentions of the jealous outsider Psycho Bitch if the woman at the heart of the story has a problem child. The child can be a cokehead, “mixed up with the wrong crowd,” or porn-addicted, as in the classic Cyber Seduction: His Secret Life. (The internet, by the way, is always a fount of evil influence over every child in the movie.) The point is that the Psycho Bitch can use these weakened, flawed offspring against the mom by giving them drugs, sympathizing with their wrongheaded grievances, stripping for them, telling them it’s okay to turn tricks in high school (Co-Ed Call Girl), seducing them, or otherwise creating “I understand you so much better than your mom” scenarios. It’s an updated version of the old stranger-with-candy fear that every parent harbors. If the mom accidentally discovers the manipulation of her son or daughter, she will be smeared as a bad parent and forced to fight allegations of abuse or neglect.

The only way Lifetime ever redeems these plots is to blame the mom for cutting off her access to The Sisterhood. She gets so busy with other things in her life—a controlling boyfriend, a demanding career, an addiction to gin—that she loses access to her mom, her sisters, her female friends, and Oprah. She has no good information. The patriarchy controls access to all advice. She fails to recognize the Psycho Bitch because, by cutting herself off from female society, she’s becoming…a Psycho Bitch.

I really think things were better when we males were causing all her problems. Really. You should have hired me. I could have shown you how it’s better to burn me up than to burn yourself up, sweetie. I mean baby. I mean ma’am. I mean, uh, strong 21st-century woman who would never fall victim to jealousy, revenge, or baby-stealing.