I Get No Kick From Women’s Soccer 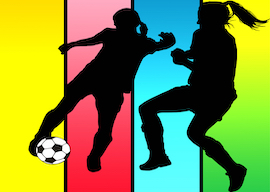 I happened to be in Paris when the final of the women’s World Cup (soccer) was played. Our little local restaurant, owned and run by Berbers, had a screen that relayed it, more or less inescapably, to the customers.

I am afraid that I was prey to very uncharitable and incorrect thoughts. The players were very good—for women. The problem is that women are not very good at this kind of thing, certainly not by comparison with men. If you want to watch soccer played well (I personally have a limited appetite for it), you should watch men.

When I uttered what seemed to me a truism, that women will never be as good at soccer as men, the reaction was horror that such a heresy—no, blasphemy—should be pronounced out loud, though of course everyone knew that it was true (which is why it was a truism).

We are now required to go through all kinds of mental contortions if we are to have “correct” thoughts. We are not supposed to say that women cannot play football as well as men, and yet we are supposed at the same time to find an all-women’s competition perfectly legitimate. Now, if women could play football as well as men, there would be no reason to have all-women’s teams and competitions. Women would have to compete on precisely the same terms as men, but we know that this would be absurd. If mixed teams were chosen purely on merit, there would not be a single female on them.

Of course, there is a reason other than sheer biological disadvantage why even the best women in the world cannot play nearly as well as the best men. I could not help but notice that none of the women were tattooed. How could the women expect to play at the highest level without tattoos? If you look at the best male players, they are practically all tattooed. Therefore, if women really want to play at a higher level, they must have themselves tattooed or remain forever third-rate.

It is true that they are progressing in making aggressive gestures like men, punching the air, snarling, and so forth, which are all very necessary to true sporting accomplishment; but they could do yet better. On the other hand, I thought their performance on rolling about the ground in agony whenever they claimed to have been fouled very creditable. I hesitate to say that this is a type of sporting gesture particularly suited to women, for which they have a natural aptitude.

“How could the women expect to play at the highest level without tattoos?”

One thing has surprised me about the emergence of women’s football into public consciousness, namely its suddenness. In this respect, it is a bit like the Olympics for handicapped people or the prominence of transsexualism. It all seems somewhat less than spontaneous. If I did not know better, I would say that it was orchestrated, in which case the most interesting question is, What will they, whoever they are, orchestrate next?

There is no they there, of course, and to that extent there is no conspiracy. And yet I had the feeling that quite suddenly, in the past year or so, there was a campaign to bring women’s football to the fore. I do not recall anyone, even the feministically inclined among my acquaintance, ever saying something such as “What we need is more attention paid to women’s football.” And yet, suddenly, it was all over newspapers, magazines, and elsewhere. If there were no conspiracy, it must mean that the media, at least the traditional media, are directed and manned (or should I say personed?) by a herd of sheep.

I suppose it is useless to complain of fashion, because there has never been any modern society without it. I am old enough to remember the days when the fashion houses of Paris decreed that the hem of a woman’s dress this year had gone up or down by an inch, and women felt obliged to alter their dresses (if they could not buy new ones) accordingly. Modern morality is a bit like that: Enthusiasms come and go, though there is no Chanel or Dior to decree what they should be. Between them, however, fashion and the herd instinct explain a lot.

Among all the effervescence over women’s football, I noticed several demands that women footballers should be paid as much as their male counterparts, on the grounds of equal pay for equal work.

This, however, is absurd; it is like demanding that a wonderful singer be paid as much as a bad one. It might well be that the bad singer works as hard as the wonderful one, indeed he might even work harder, but no one would pay as much to hear the bad one all the same. Women footballers should be paid the same as men when crowds are willing to pay as much to watch them, which I suspect will be never, though anything is possible in this very strange world.

Incidentally, it is astonishing that the labor theory of value, according to which the value of a good or service is determined by the amount of socially necessary labor required to produce it, and which so many ontological malcontents of various stripes have adopted to justify their schemes for universal improvement in the economic fate of mankind, could ever have survived the most elementary of considerations such as that the same amount of labor can go into producing the valueless as the most exquisitely valuable.

No doubt women footballers train as hard as men, but the universe is not fair: However hard they work, they will not be as good as men, and it is probable (though not absolutely certain) that their efforts will never be as valuable as men’s on a supply-and-demand basis. It is curious that I was in the company of some people I esteem in which I felt it would be a social faux pas to say these obvious things, a faux pas not because they were so obvious, but because they were heretical or even blasphemous. I value absence of conflict over the dinner table.

There is a law of the conservation of blasphemy: If it is not against God, you can always blaspheme against secular pieties.