I Knew a Guy Who Was LGBTQRSTUVWXYZ 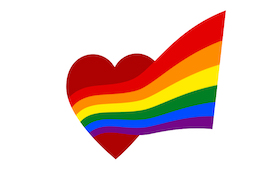 I meet a lot of people at horror conventions and other pop-culture gatherings.

I’ve heard a lot of stories about weird sex and gender-blending and adolescent confusion and being a social misfit and changing your name 13 times and coloring your hair shades of the rainbow never conceived of by the Crayola company, and God bless every person who has to go through that in a world of harsh judgments and elder disapproval and bullying.

And yet I still don’t understand LGBTQ.

Has anybody ever really self-identified as Questioning? I suppose they have or it wouldn’t be on the list, but it sounds like something you do when you play World of Warcraft and sit around wondering, “Do I want to be a Paladin, a Mage, or a Rogue—I just can’t decide.” I mean, check your libido, it’s probably telling you something.

“There aren’t just eight categories of ‘gender identity,’ there are 8 billion.”

Either way, I say we don’t need the Q. Are we supposed to think that a Q is not represented by one of the previous letters? If a Queer—which, by the way, in my youth on the schoolyards of Texas, was a pretty harsh slur—is not also either Lesbian, Gay, Bi, or Trans, then I need some diagrams and some YouTube videos to understand just exactly what kind of physicality and sexuality is going on here.

Originally it was just LGB—does anyone remember those prehistoric days?—and even the T was a little suspect. Did the T stand for transsexual, transvestite, or transgender? It could even stand for transition, since that means a person moving slowly from one gender to another in processes that sometimes take decades. And if it meant transgender, what did that mean exactly? I have a friend who defines herself as trans—actually I should say hirself, not herself, but I’m not exactly sure why—a friend who defines hirself as trans but also lesbian, therefore a biological male who presents as female and dates females and has relationships with females. So a lesbian with a penis, which, if you think about it, is a penis that becomes, in this situation, basically a built-in sex toy—but then again, let’s not go to places known only to the two LGBTQ lovebirds. (Actually I don’t think I’m supposed to say biological male, either, I’m supposed to say Assigned Male at Birth.) I don’t think ze is a demiboi—ze being the designation for a nonbinary personal pronoun, boi being the opposite of what my friend is, a person presenting hirself as masculine but not male, and demiboy being partly boi and partly another gender although the other gender doesn’t have to be girl, woman, or female. Did you follow that? Probably not, but I don’t think I can re-explain it in any better way.

By the way, before I forget: Bureaucrats of the world, stop putting the word Sex on a driver’s license! It annoys the LGBTQIA and will undoubtedly lead to millions of wasted man-hours getting it changed to something more neutral and bland, and by neutral I’m making no reference to the neutrois, which is the preferred term for the agender community, the gender-fluid community, the nonbinary community, and the genderless community. One way you could change it is to make it Sex Assigned at Birth, but then you would have to include a separate column to account for any subsequent surgical alterations, if you know what I mean and I think you do. I once suggested to a doctor that you could put on there “Has a Dick/Doesn’t Have a Dick,” only to be informed that sometimes it’s not that easy to tell, plus that would involve employees of the Department of Motor Vehicles getting into a drop trou situation and nobody wants that, especially if you’re examining somebody who likes a lot of genital jewelry.

As I said at the beginning, though, I talk to a lot of people, and therefore I’m constantly in danger of misgendering, which is assuming someone is male or female when they’re not, or assuming they’re male or female at all because they might be something included in the great tossed salad of the IA part of LGBTQIA. I being Intersex, which is the preferred term for what we used to call hermaphrodite, and A being Asexual. (Getting rid of the word hermaphrodite seems tragic to me, since it means “born of Hermes and Aphrodite,” and those are two of the greatest partyers in the Greek pantheon.) Some people, on the other hand, say the A stands for Ally, which means a cisgender person (cisgender being the opposite of transgender) who becomes part of the LGBTQIA pride-flag spectrum by essentially signing up. It’s like joining Greenpeace but without the annual dues. These are basically people who like attending the Halloween parade in Greenwich Village but that’s about as far as their alt credentials go. I would tend to eliminate them from the acronym and start using Asexual by itself. But if we are going to include cisgender spectators in the acronym, we should go ahead and put it on there so it becomes LGBTQIAC, and the advantage of doing that is to get it closer to something you can remember: Largebutt Quack.

I know, I know, if you use Largebutt Quack you’ll forget the Intersex people, but sometimes someone has to suffer for the good of the majority, or in this case, the majority of the minority.

Here’s my point about all this:

If you go deep into the sexual identity of anyone—cisgender, transgender, intersex, androgyne, bigender (please add a hyphen so we don’t think it’s big-ender), gender variant, pangender, transmasculine, transfeminine, butch, femme, stone butch, high femme, third gender, aliagender, boi, demiboy, demigirl, polygender, trigender, gender creative—in other words, if you go into the mind of anyone, anywhere, at any time, at any place on the gender spectrum, you will find a secret idiosyncratic place that makes that person who ze is. Unless you’re having sex with that person—and sometimes even if you are—you’ll never know what that idiosyncratic place is.

There aren’t just eight categories of “gender identity,” there are 8 billion.

Defining part of the population as LGBTQIA is self-defeating because it separates.

Come back to the family, people. Don’t make me label you. It’s all the same. It’s called the HTTFIOLFL community:

Humans Trying To Figure It Out, Looking For Love.