I Got Your Gluten Right Here, Pal 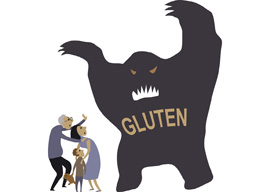 BURLINGTON, Vt.”Okay, the next person who tells me he’s gluten-free is gonna get kicked in the gluten.

There’s a restaurant here trying to sell me gluten-free enchiladas.

There’s no such thing as gluten-free enchiladas. If it doesn”t have gluten in it, it’s not an enchilada!

Let me give you my theory about the GOTs.

That would be Gluten-Obsessed Terrorists.

It’s the word itself. As soon as people hear the word gluten, they think, “That sounds like a longer, more serious version of glut. There’s a glut of food involved. It’s gonna make me fat.”

But it also sounds like glutes, the shortened version of gluteus maximus, the chirpy fitness trainer’s favorite word, as in, “Okay, guys, I want three sets of Barbell Hip Thrust Lunges because we”re working those glutes today!“

And then there’s the fact that, if you change the long “u” to a short “u,” gluten becomes glutton.

I”ve gotta get rid of all the gluten or else I”m gonna spontaneously combust like one of those 600-pound guys who have to be airlifted out of their trailer house by Richard Simmons!

Plus, any word that sounds mysteriously German might have come from a movie about the Third Reich.

Hitler is going to send all fat-asses to a concentration camp!

Listen to me, people. Gluten has nothing to do with being fat. Unless you have celiac disease, shut up!

And how many people have celiac disease?

Yes, that’s what they say. If we didn”t eat all that damn Mediterranean food, we wouldn”t be sickly and frail. Like the Roman legion, the Spanish conquistadors, the Spartan warriors, and the Egyptian dynasties”you know, all those lethargic civilizations around the Mediterranean that were overrun by the Canadians.

But in case you haven”t been subscribing to the Gluten Is Satan Gazette, there’s another more basic reason that we”ve all become poisoned with Cream-of-Wheat Toxins. We gave up the hunter-gatherer diet and adopted the agricultural diet. When we were hunter-gatherers, we consumed 300 different species and varieties of food. Once we became farmers, that number shrank to 30, and what we didn”t know was, we weren”t supposed to eat the wheat. We were supposed to eat raw Latvian boar and Pyrenees muskrat. That’s why our guts are all pukey and disgusting.

Of course, there’s that pesky statistical problem”namely, that the last hunter-gatherers, after all those millions of years of hunting and gathering, had a life span of 35.4 years for men and 30 years for women. I guess that’s a good trade-off, though. If we all go gluten-free, we”ll end up dying off in our 30s like the cast of Logan’s Run, but we”ll have impressive bowel movements our whole lives.

But because we live in a masochistic bulimic anorexic food-hating universe of nutzoid crusaders who want to sell us colon scrapers and Lake Titicaca Quinoa Seeds, we have to get rid of it precisely because it tastes good.

So let’s look at who sets out to be “gluten-free” in the first place:

People who have no job.

Because if you had a job, you wouldn”t have time for the gluten homework. For example, to be completely gluten-free, you have to learn all the properties of all the storage proteins that are conjoined with the starch in the endosperm of the foods that contain wheat, barley, rye, oats, and”okay, screw you people”spelt, triticale, and Kamut.

(A digression on “alternative grains”: If you”re eating muffins made out of spelt, you”re already a loony tune and so you should just go live in a grass hut with a cult leader named Siddhartha. If you”re a restaurateur who has stuff on your menu like “made from artisanal Swedish-grown triticale,” you should face a firing squad. The firing squad can probably be provided by the guys in Montana militia country who grow Kamut.)

So, as I was saying, when you”re doing your 300 hours of graduate-level agrostology, studying which prolamins got conjoined with starch in the endosperm of which grains, you”ll very quickly learn the difference between gliadins, glutenins, hordeins, secalins, and avenins, and then you”ll purchase a farinograph to measure the Brabender Units in the flour used to make your particular varieties of ingested food products, and then you”ll make sure that any future “gluten-free” products you purchase have been kneaded, agglomerated through centrifugation, and power-washed, using a screw press, an atomizer nozzle, and a drying chamber, followed by air cooling, pneumatic transport, sifting, and milling.

Once these various foodstuffs have been deglutenized, you”ll need to be sure that no residual gluten has stuck to your Bounty paper towel or, God forbid, coated a prong of your dinner fork because, for people who can”t tolerate gluten, one drop is enough to contaminate your life.

Let me sum that up: We”re dealing with the Dr. Frankensteins of food hysteria.

Otherwise, I don”t believe you.

Let’s take, for example, breakfast cereal. The first things the anti-gluten terrorist crusades against are Cheerios, Frosted Flakes, Lucky Charms, and, of course, Wheaties, because the word wheat itself is so fraught with death that it can never be uttered. It’s the W-word. In an attempt to recruit nonbelievers into the War on Cereal, our gluten hater says, “Don”t worry, there are plenty of morning breakfast foods that are just as good and taste exactly like cereal.”

Those things would be fonio, Job’s tears, millet, and teff.

Let’s run down this list as quickly as possible:

Fonio is a grain grown in West Africa that has the smallest seeds in the world, therefore it’s like eating shotgun pellets.