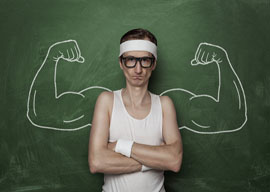 JUPITER, Fla.”The plastic remote on my Sunbeam Electric Heated Fleece Blanket went haywire last night and made me oversleep, so I spent the day in my spaghetti-strap T-shirt and my favorite pair of wind pants from the Adidas outlet store out on Interstate 95 binge-watching the Death Wish series because I couldn”t remember which movie had the scene where Charles Bronson blows away Laurence Fishburne with a perfect American Sniper-style long-distance kill shot that goes through the giant boom box Laurence is holding on his shoulder and into the lowlife gangbanger’s skull.

It turned out to be in Death Wish II, but by the time I found it I was in the grip of Angry White Man Syndrome and so I had to watch all the way through to the vastly underrated Death Wish V: The Face of Death because I had fond memories of the cyanide-laced-cannoli scene.

That’s what we Angry White Men do.

When we”re not beating up our wives and girlfriends or killing Meskin illegals with our concealed-carry Glocks purchased at the Tactical Knife and Gun Wholesale Megamarket in Lumberton, North Carolina, we”re pretty much leading normal lives hanging around the Waffle House so the process server can”t find us and extradite us to southern Alabama to face charges on the 47 months of back child-support payments we never paid because we “just forgot, Your Honor.”

I actually didn”t realize I was an Angry White Man until I finished reading the 397 articles written since the election that start out, “Donald Trump is the product of hatred, misogyny, nativism, bigotry, and resentment emanating from angry white men lamenting the loss of their factory jobs to China.”

“Why is it assumed that being opposed to the current immigration policy equals hatred of foreigners and fear of multiculturalism?”

The only factory I ever worked at was Phil Hargett’s bus-bench factory in Tullahoma, Tennessee, but I always thought the reason they went out of business was that Phil sold ads on the back of the benches to the Mons Venus All Nude Strip Club in Tampa, causing the Tampa City Council to cancel his contract. Knowing that China stole the municipal-bus-bench business from us makes me even more angry, since it probly makes me ineligible for unemployment checks.

The Angry White Man theory is based on the fact that “whites without a college degree””apparently this is something that pollsters keep track of”voted for Donald Trump over Hillary Clinton by a margin of 39 percent. This one statistic has been repeated over and over to bolster the phrase “angry white men,” first used by Bill Clinton as a way of explaining the 1994 midterm elections”and used again this year to explain his wife’s loss, indicating Bill really is stuck in the past.

If you knew about the Angry White Men in 1994, Bill, why didn”t you warn Hillary?

But more to the point, if you keep calling people like me Angry White Men, we eventually become…Angry Goldurn White Men!

So let’s get etymological on this puppy:

Numero Uno: What media Sanhedrin decided that “absence of a college degree” equals bigotry, anger, hatred, misogyny, blah blah blah? In a world full of worthless college degrees that cost hundreds of thousands of dollars, why is the decision not to seek a degree placed in a category indicating “Uh-oh, Neanderthal ahead!”? I can think of any number of reasons people would not seek a college degree, including (a) they”ve already got the job they want (Mark Zuckerberg, Bill Gates), (b) they want to be an entrepreneur (Steve Jobs), (c) they need to get started in their field while they”re young (Oprah Winfrey), (d) they”re talented but don”t do well in an academic setting (F. Scott Fitzgerald, Al Pacino), (e) they got expelled from school for reasons that have nothing to do with their potential (Ted Turner, John Lennon), (f) they want to do humanitarian things that are more important than school (Walt Disney, Abraham Lincoln), or (g) they are self-educated in the fields they consider important (Richard Branson, Michael Dell).

Numero Two-o: Who said the “whites without a college degree” are all male? Why is it always Angry White Men and never Angry White Women, when, in fact, a majority of white women voted for Trump? My theory is that it’s harder to make an Angry White Woman into a prehistoric reptile fighting its way back from near-extinction. It’s much easier to summon up the image of Kathy Bates” husband in Dolores Claiborne“a bitter drunk child-molesting wife beater who (remember this part?) hates his job on a fishing boat”instead of using, say, Charlize Theron in Monster, a white woman who executes white men for a living. For that matter, when Madonna stops in the middle of a concert to talk about the Angry White Men who voted for Trump as a way of “getting rid of female empowerment,” why doesn”t the next day’s headline read “Angry White Woman Rails Against Angry White Men Who Robbed Her of…uh…Never Mind”?

Numero Three-o: Why is anger as a voting incentive limited to white males? Don”t black men get angry? When Louis Farrakhan holds a rally, why doesn”t Yahoo News say “Angry Black Men Gather in Chicago”? Why aren”t there any Angry Latino Men or Angry Chinese Men?

Numero Four-o: More specifically, how do you explain the fact that the Angry White Men who voted for Trump in 2016 are the same white men who voted for Obama in 2008? When they vote for Obama they”re not angry, but when they vote for Trump it can only be because they”re enraged hicks? Gogebic County in Michigan is 92 percent white and hadn”t voted for a Republican since 1972″until this election. The counties in southwestern Wisconsin, all heavily Democratic, went for Trump after a strong Obama vote in 2008 and 2012. Eastern Iowa, Democratic since 1988, went for Trump. Luzerne County, Pennsylvania, which is frequently used as the very definition of “working-class,” went for Republicans for the first time since 1988. Why are all these people classified as “angry” now, but in 2008, when they were angry at George Bush, they were just “voting for change”? Could it be, just perhaps, maybe, they feel betrayed by the Democratic Party? If we”re gonna call them angry, let’s define what they”re angry about.

Numero Five-o: Why is it assumed that being opposed to the current immigration policy equals (a) hatred of foreigners, and (b) fear of multiculturalism? Southern white men don”t care that there are Italian neighborhoods in New York, Polish neighborhoods in Chicago, West African neighborhoods in Washington, D.C., or Turkish neighborhoods in Los Angeles. They get the whole melting-pot thing, which is about 180 years old at this point. If they”re angry, it’s because they believe that people like Hillary Clinton exclude them from the melting pot by constantly talking about aggrieved blacks, aspirational Latinos, and overlooked Asians, but if they celebrate their Scots-Irish heritage at the Jerry Lawler rassling match at Mid-South Coliseum or evangelical rallies at Thomas Road Baptist Church, then they”re not regarded as part of the multicultural tossed salad, they”re just pale-skinned yahoos who are probably racists, if not white supremacists.