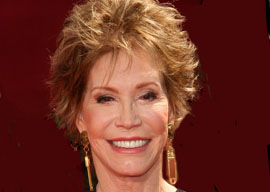 “She made a show about how single career women could still have fulfilling lives, with the help of the powerful TV executive she was married to.”

My Facebook friend Tom Forsythe, besides being one helluva Muhammad cartoonist, is also wittier than many pro scribes”including me, dammit. I wish I”d thought of that quip after Mary Tyler Moore died.

It was that former affliction that handily allowed me to exhibit an addict’s perverse snobbery about her drug of choice:

Contrast those two rancid potheads Cheech & Chong (I never tired of pointing out) with a couple of drunks, namely Moore and Dick Van Dyke”behold: graceful, lucid, and wholesome, even in prison duds and novelty shackles.

As for her fine work, most of her well-meaning obituarists are getting it wrong. The Mary Tyler Moore Show was not, in fact, the first sitcom to center on a single career girl: Marlo Thomas beat her onto the air by four years on That Girl“complete with high-energy, “skipping and twirling down big city streets” opening title sequence and “look out, world!” theme song. (Unlike MTM, Marlo’s show even had a cute logo.)

And contrary to what you might presume, Marlo’s powerful showbiz father, Danny, didn”t cook it up as a vehicle for his daughter. Through her own production company, she was That Girl‘s “de facto executive producer.” Whereas, despite its name, MTM Productions was run entirely by Moore’s husband, Grant Tinker.

But of course, way more girls wanted to be Mary Tyler Moore, and more men wanted to date her. Slender and vivacious as she was, no one can imagine Marlo Thomas wearing the “Ugly” Green Dress.

We heard from those girls last week, the women who”d been inspired to pursue broadcasting careers by watching “Mary Richards”” work as a local news producer every Saturday night.

Oprah Winfrey, being the most famous, wealthy, and powerful of them all, even indulged in a shot-by-shot re-creation of MTM‘s opening sequence, complete with hat toss. When Winfrey’s crew surprised their boss by getting Moore herself to phone in to her show, mighty Oprah crumbled to pieces. While I couldn”t find this particular clip, I distinctly remember Oprah burbling, quite touchingly, “But why would Mary want to call me?”

Girls who didn”t necessarily dream of having Mary’s job definitely fantasized about having her apartment. “Marytylermooresapartment” became one universally understood word: When I found a cheap but/therefore grotty first apartment in Toronto, my would-be roommate pulled out of our arrangement; “She expected marytylermooresapartment,” tsked my mother.

I certainly didn”t. As I”ve said here before, “Hogan’s Heroes made POW life appear so thrilling yet utterly uninjurious that, while other girls daydreamed about Mary Tyler Moore’s mod Minneapolis bachelor pad, I fantasized about the snug, comradely confines of Stalag 13.”

Long after MTM went off the air, on a business trip to Minnesota, I nevertheless accompanied my female boss on the requisite pilgrimage to marytylermooresapartment, the Victorian 2104 Kenwood Parkway home that played that “role.” (Back when the show was still a going concern, the exasperated owners tried to discourage the crew from filming fresh exterior shots every new season”which simply encouraged more neck-craning tourists”by stretching an “Impeach Nixon“ banner below “Mary’s” window.)

Which is kind of funny because Mary Tyler Moore was a lifelong Republican (except for a lapse campaigning for Carter)”a Fox News fan and “libertarian centrist.” An ancestral connection led her to help fund the renovation of Stonewall Jackson’s headquarters. Yet, I didn”t see any of these facts mentioned in the postmortem valentines.

In fact, Moore told PBS in 2013 that she”d been a reluctant symbol of women’s liberation and “did not believe in [feminist Gloria] Steinem’s view that women owe it to themselves to have a career.”