I Have Met the Enemy, and He Is Easily Terrified 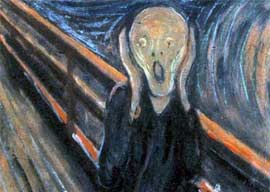 Late-stage leftist moral hysteria has recently achieved an unprecedented level of earsplitting shrillness. To me, this suggests that the quixotic legions of social-justice crusaders aren”t quite so confident they”re on the right side of history after all.

As someone who traffics in words, particularly how people toss them like rocks at one another in the culture wars, I”ve noticed that two of the left’s favorite words over the past few years””problematic” and “unacceptable””have yielded to the starker and more panicky “horrifying” and “terrifying.”

At least “problematic” and “unacceptable” imply a sense of being in control”well, these are obviously problems, and we clearly refuse to accept them, so let’s snuff them out and they won”t be problems anymore.

But if you find yourself constantly horrified and terrified, this implies you”ve lost control and are making a hasty retreat.

What’s gloriously hilarious to me is how little it takes to horrify and terrify them.

Actress Emma Watson wails about the “Horrifying Sexism She Has Faced In Her Daily Life.” Such tortures and torments include once being slapped on the butt and often feeling “scared walking home.”

“It would seem that modern progressives are exceedingly selective in what horrifies and terrifies them.”

Must be tough”much tougher than clitoridectomies or being the victim of an honor killing, because to suspect that such things are truly horrifying or terrifying would be Islamophobic.

“We Should All Be Terrified of Anti-Trans ‘Bathroom Bills,’” screeches an easily frightened writer for VICE, because it’s baselessly fearful to think some fat hairy perv may want to flash his hairy nutsack at your six-year-old daughter in the women’s bathroom while claiming “trans” rights.

A T-shirt that gently suggests women should say “no” rather than “maybe” if they aren”t interested in having sex with a guy is deemed “Horrifying””much more so than, say, having your life destroyed by a false rape accusation, because we all know that’s a myth, anyway.

Weight Watchers’ new program encouraging a “holistic” approach to weight loss is described as a “horrifying” example of “fat-shaming””far more horrifying than the sight of a naked 500-pound woman, obviously. In fact, anything that suggests it’s generally unhealthy for women to swell up to the size of sea lions is “horrifying,” and you’d have to be an incorrigible chubbophobe not to realize that.

“The U.S. Is Becoming a Terrifying Nation for Women,” despite the fact that women of all races outlive white men; after all, white men deserve all the terror that’s coming their way, right?

Actress Sally Field claims it “horrifies” her that some parents would disapprove of her gay son”obviously much more so than the fact that her son is five times more likely to attempt suicide than straight teens and is statistically likely to die anywhere from eight to twenty years before straight men do.

The journey of an undocumented immigrant in America is “terrifying,” but somehow I suspect not nearly as terrifying as the ordeal I’d face if I were walking around in Mexico without ID while trying to game their welfare system.

Antiabortion laws are “really terrifying,” but in the grand scheme of things I doubt they’re nearly as terrifying as the routinely grisly scenes at Doctor Kermit Gosnell’s late-term abortion murder factory.

“U.N. Experts Seem Horrified By How American Schools Treat Black Children” but don’t even seem to notice that black students are beating white teachers bloody and pouring gasoline over “white boys” before setting them on fire.

It would seem that modern progressives are exceedingly selective in what horrifies and terrifies them.