I Have Seen the Future, and it Is Idiocy 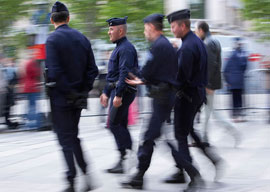 Yesterday morning, as I was sitting in the flat on Paris that I have rented for a time quietly finishing my latest book, Murderers I Have Known (and I have known quite a few), a furious row broke out in the street six floors below. I went out onto the terrace”the flat is on the building’s top floor”to see what was going on. There were several other equally curious people standing on their balconies on both sides of the street.

A little knot of young black men, with two or three girls among them, was having a furious row. It was obvious that they were in earnest, though goodness knows about what, as I could not make out any words. I was like a dog; I went by the tone of their voices.

One of the young men struck another and he fell, his face covered in blood. The man who had struck him kicked him with full force and got down on him to punch him as hard as he could. He got in several very hard blows before some others hauled him off. If he had not been hauled off, I think he would have beaten him to death. I was very glad that neither of the two, the beater and the beaten, had a gun, for I am sure that in their heightened state of emotion, whatever it was about, one of them would have used a gun to kill. Of course, there will be those who say that if each of them had thought the other had a gun, they would not have fought in the first place.

“One must not exaggerate the degree to which official idiocy impinges on our lives.”

It was strange to see cars crawl by this scene, the drivers obviously seeing what was going on but doing nothing about it. Some passersby passed by and others tried to intervene. More than one called the police.

Oddly enough, once the man had been hauled off his prostrate associate (former friend? longtime enemy?), the group reformed and went up the street, still arguing furiously. A couple of shopkeepers came out to tell them to calm down, as the frightening fury was presumably bad for trade.

This all continued for several minutes. The police never came. They probably had other things to do.

As it happens, their slowness to react (infinite slowness, in fact, since they did not react at all), contrasted oddly with an experience I had the previous Sunday. A couple of American filmmakers came to Paris to interview me”it always surprises me that anybody would take so much trouble to interview anybody, let alone me”and decided that the little park opposite my flat, with a pretty little bandstand, would be a good place to do so. They set up the camera, but a few seconds later, before they could ask me a single question, a municipal policeman arrived. They were not allowed to film here without a permit from the mairie of the arrondissement, he said. I explained that these were Americans, come all the way from Texas expressly to interview me. He, a very pleasant and polite man of African origin, phoned his chief to see whether an exception could be made. As I suspected, it could not.

I told the film crew that we should make no fuss; the man was only doing his job, silly as that job might be. As it happens there were several drunks in another part of the park making aggressive-sounding noises and breaking bottles, but them he did not approach, perhaps wisely, as they were several and he was only one. He thought he would have more luck with someone wearing a tweed jacket and corduroy trousers as I was. We found a cafÃ© willing to accommodate us.