I Know Why the Caged Bird Screams 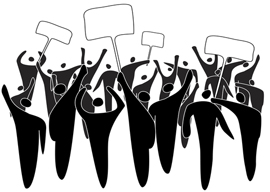 I am perhaps unique among modern Americans in the sense that I find so-called “hate groups” to be tremendously amusing rather than appalling. Flailing about uncowed and unashamed as they do amid the suffocating current climate of toxic niceness, I”d even call them “refreshing.”

And when I say “hate group,” I”m not talking about people that used to be plain old bread-and-butter hate-free Americans yet are increasingly becoming marginalized and stigmatized due to Cultural Marxism’s ever-constricting, bloody-fanged iron vagina. I”m not referring to Republicans or people who watch Fox News or those who oppose illegal immigration or those who don”t think that male-to-female transsexuals are actually women. Terms such as “hate speech” and “hate groups” have swollen to surreal, dirigible-sized proportions. It’s gotten to the point where such easy epithets apply to just about everyone except the self-appointed and maniacally vigilant Hate Police.

No, I mean groups and individuals that pulsate and throb with unabashed, drooling hatred. I don”t mean groups who are accused of being hateful; I mean ones that get right up in your face and tell you they”re full of hate. I”m talking about those who don’t shy away from identifying their enemies and then will unblinkingly go into graphic detail describing the torments and tortures they will inflict upon them. Framed as they are within this dreadfully medicated and morbidly smiley-faced modern world, I find such jagged incongruity hilarious. Quite simply, I enjoy hate groups.

“One hate-speech law piled atop another will only make the whole world go mute.”

For two decades running”ever since a friend sent me a VHS tape of them harassing the fuck out of frightened passersby in Times Square”my “favorite” hate group has been the Black Hebrew Israelite movement, notably the screamingly belligerent iterations that infest street corners in the Northeast and Midwest bellowing through microphones and megaphones about “crackers” and “faggots” and “so-called Negroes.”

For starters, I like the way they, well…goad people. I also enjoy their pharaonic sense of couture, which is an odd mix of Arabian Nights and Grandmaster Flash and the Furious Five.

The dogmatic thread that unifies these various splinter groups is the belief that they are the true descendants of the ancient Israelites. For example, The Israelite Church of God in Jesus Christ preaches that ex-Africans stranded by slavery in America are descended from the tribe of Judah, while Haitians are the tribe of Levi, and the tribe of Ephraim eventually became what are now known as Puerto Ricans.

Various oddball religious sects of American blacks have preached they were the True Jews going all the way back to the late 1800s, but the more recent manifestations of the “Black Hebrew” meme really know how to bring the hate like nobody’s business.

The following statements were allegedly made over loudspeakers on a Center City Philadelphia street corner by members of the Israelite School of Universal Practical Knowledge, a small yet disproportionately loud subsect currently based in Upper Darby, PA, a piddling four miles from my hometown of Clifton Heights:

We”ll be happy for it man. When we can take your little white children with them big heads man and them blond”and that blond hair, right, and the blue eyes and smashed [sic] they head against the walls man. I wanna catch one coming out the womb and rip him from his feet and take him and smash his head against the damn floor man.

Don”t misunderstand me”if one of these idiots tried laying a hand on my son, I”d do everything in my power to ensure their stupid coconuts got smashed first. It’s not that I approve of their message, but I admire their honesty. It’s helpful when your self-declared enemies are so eager to make themselves known.

Commandeered by a man who calls himself “General Yahanna,” the Israelite School of Universal Practical Knowledge (ISUPK) features YouTube videos with titles such as “HEBREW ISRAELITES make WHITE COLLEGE GIRL CRY in CHICAGO,” “JEWISH BOYS find out THEY are NOT THE REAL JEWS, “ARABS HATE BLACK PEOPLE,” and “BLACK WOMEN ARE OUT OF CONTROL IN AMERICA PT.1.”