Ideas for a Better Nation 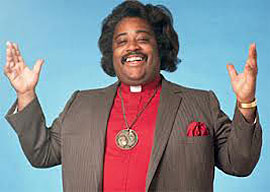 While grazing hither and yon around the glades of the Internet, I stumbled on the Reverend Al Sharpton, who was demanding reparations for slavery. He was against slavery, I divined, and wanted money. I could hardly blame him, as I too want money.

In truth, I confess that in the past I have written harshly of the idea of reparations. I have said cruel things, such as that the entitlement programs are enough reparations for a dozen slaveries. This time, however, a blinding light fell over my consciousness, doubtless from On High, and I saw the error of my ways. I determined to repent and make amends for my sins.

I immediately asked Violeta to make an inventory of all our slaves”if not a precise count, then at least in even dozens”and to inform them that we would issue checks for reparations the next day, plus Greyhound tickets to Memphis.

She pointed out that we didn”t have any slaves. My God. I hadn”t thought of that, so eager was I to commit social justice. She, being Mexican, and probably a hard-hearted Republican by instinct, said her understanding was that slavery ended in 1865, so that our slaves would be at least 150 years old. How would they live when they got to Memphis?

“As a white American, I think that African Americans and Indians should pay us royalties for the use of our civilization.”

I was kind to her, and patient. She is bright and rational, and thus has no grasp of American politics. I explained that we European Americans are so desirous of curing injustice that we invent it when there isn”t any so that we can Fix It by giving all our money to those who either can”t or won”t make any for themselves. It’s like stocking a bass pond. We get to feel good about ourselves, which is almost our only entertainment in a boring age. We are happy.

Those who get the money always ask for more, so we can always confess yet more guilt. See? It’s a closed ecosystem.

And there is justice in it. In our hearts we whites know it. Mr. Sharpton has said that bringing slaves in chains to America was a terrible thing. I would like him to know that a great many white people could not agree more. However, as long as we are balancing the financial books, there are other matters pecuniary that merit attention. I believe that we whites should pay such debts as we owe, with accrued interest, but I also believe that in honor others should do the same.

For example, as a white American, I think that African Americans and Indians should pay us royalties for the use of our civilization. I do not propose a great exaction, but only a reasonable fee for enjoyment of contributions that whites have made and that others use. I mean things such as telephones, air conditioning, flush toilets, democracy, civil rights, antibiotics, running shoes, and the machines that read EBT cards. Also paved roads. Cars. Computers. Electricity. Clean water. Those sorts of things.

I have in mind something like a software license, with one price for the entire bundle. Surely there should be some reward for our 2,500 years of onerous research in mathematics, physics, politics, engineering, from fifth-century BC Athens through Rome, the Renaissance, the Industrial Revolution, and Silicon Valley, with countless brilliant men going where no one had gone before, even Captain Kirk.

Which brings to mind other rearrangements of the body politic, or corpse, that might be made with salutary results.

Before entering these deep waters, I should say that personally I think that things should be done according to individual merit. However, I recognize that the United States is collectivist in spirit, uncomfortable with individualism, and has chosen to order everything according to race, creed, color, sex, and national origin. I yield to the majority. Thus I suggest that voting rights should be determined according to the contributions to civilization made by the various tribes.