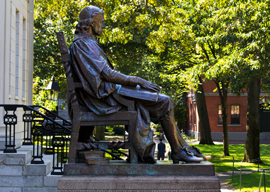 People who live among words, books, and ideas, and who are scholars, or hobnob with scholars, or dream of being scholars, occasionally need reminding of the social world’s true contours.

Human society is just a magnification, a multiplication, of individual human nature, concerning which I laid out the essentials in that epochal best seller We Are Doomed:

The ordinary modes of human thinking are magical, religious, social, and personal. We want our wishes to come true; we want the universe to care about us; we want the approval of those around us; we want to get even with that s.o.b. who insulted us at the last tribal council. For most people, wanting to know the cold truth about the world is way, way down the list.

The Jason Richwine business has illustrated all over again for those who needed the reminder that even a society as technically sophisticated as ours is a great dark slough of ignorance and passion in which the small voices of reason and calm empirical inquiry must struggle to be heard above the bellowing of the night beasts.

Richwine was the Heritage Foundation analyst who resigned after it was made public that he”d been awarded a Ph.D. from Harvard University on the strength of a dissertation titled “IQ and Immigration.”

“The witch-hunters are rarely satisfied with only one victim.”

For anyone who doubted that Pathos holds the whip hand over Logos in the public arena, the Richwine affair has been instructive. In dealing with social deviance, not much has changed across the centuries. We have cut back on the harsher kinds of penalties, but otherwise there’s been little progress since the trial of Socrates, who, like Jason Richwine, “failed to acknowledge the gods that the city acknowledges.”

Should you want something more up-to-date for guidance, the charming lady who calls herself “hbd* chick“ recommends Malleus Maleficarum, the fifteenth-century treatise on witchcraft (an old favorite of mine, full of good psychological insight).

They are rituals of a sort in which social (and sometimes physical) boundaries are defined”witch-hunts are, at these critical moments, extravagant ways of working out who’s in the in-group and who is not, and woe to anyone who is not.

The witch-hunters are rarely satisfied with only one victim, though. When the chief caster of spells has been identified and burned, there may still be accomplices lurking in the woods.

Thus Ana Marie Cox in the London Guardian says: “The real criminals here would seem to be Harvard.” Ms. Cox presumably means the three Harvard professors who signed off on Jason Richwine’s dissertation”you know, those spell-casters who poisoned the well water and caused two-headed calves to be born.

I actually agree with Ms. Cox about the identity of the real criminals here, but I disagree with her on the nature of the crime. Professors Borjas, Zeckhauser, and Jencks do indeed have charges to answer, though I believe they are charges of cowardice in the face of the enemy.

I have never worked on anything even remotely related to IQ, so don’t really know what to think about the relation between IQ, immigration, etc….I don’t find the IQ academic work all that interesting. Economic outcomes and IQ are only weakly related…the focus on IQ is a bit misguided.

So why did he sign off on a thesis titled “IQ and Immigration Policy”?