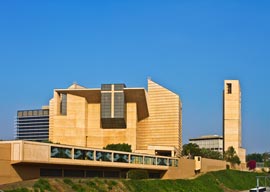 Cathedral of Our Lady of the Angels, Los Angeles

I could”ve written this column a week ago, before the National Geographic Channel’s “Killing Jesus” had even aired, and still used the same opening sentence: “Killing Jesus killed in the ratings, scoring record numbers for the network, and delivering more viewers than any program in NatGeo’s history.” Bill O”Reilly? Best-selling book? Palm Sunday? Frasier? Everyone knew the three-hour epic TV movie would be a hit. And the ratings proved everyone right. “Killing Jesus” drew 3.7 million viewers, setting a NatGeo record.

In an interview with HitFix a few days before the premiere, Kelsey Grammer, who plays King Herod in the film, expressed his belief that perhaps the Almighty has decided that the time has come for a renaissance of films that cater to the traditional values crowd. And that got me thinking…if this is God’s will, he”ll need better apostles than Hollywood’s largest, ostensibly underground cabal of conservatives (a group co-founded by Grammer): Friends of Abe (named after Lincoln, who O”Reilly killed in a previous book).

FOA’s membership list is impressive, ranging from the conservatives that Hollywood tolerates (Gary Sinise, Clint Eastwood, Robert Duvall), to the ones it ridicules (Jon Voight, Scott Baio, Pat Boone), to the ones it probably doesn”t know are conservative (Jerry Bruckheimer, Powers Boothe, Michael Beach). I was in Friends of Abe from 2009 until 2013, and the number-one topic of conversation among members was how “we,” the Abes, could use our vast “industry” talents and connections to craft films and TV shows to counter the propaganda from the Hollywood left.

“There were too many atheist libertarians and secular (okay, atheist) Jews in the mix, who privately viewed their cross-wearing and churchgoing fellow Abes as irrational Neanderthals.”

And at every step, with every attempt, we failed. The success Grammer has found with “Killing Jesus” eluded him when he tried to do projects through FOA. It eluded all of us. Why? Why did a group of undeniably talented conservatives (with a membership list of about 2,200) fail so miserably where others have succeeded? Along with “Killing Jesus,” there have been quite a few recent “conservative-friendly” Hollywood success stories: “American Sniper,” the “Narnia” films, “The Passion,” “Soul Surfer,” “Team America,” “300,” “The Kingdom,” “Facing the Giants,” “Fireproof,” “Courageous,” “The Blind Side,” and the current mega-hit “Kingsman.” Turning out films with a conservative slant and popular appeal can be done, and at one point or another every conservative has said it should be done. Yet the industry’s number-one group of right-leaning professionals failed to do it.

What went wrong? Why is FOA’s main gift to the world “An American Carol?” You remember that film, don”t you? No? “An American Carol” was supposed to be the “Airplane” of the right. Friend of Abe member David Zucker, the co-director and co-writer of the original “Airplane,” was at the helm, with a practically all-Abe cast including Grammer, Voight, James Woods, Trace Adkins, Robert Davi, Mary Hart, John O”Hurley (Mr. Peterman from “Seinfeld”), and Kevin Sorbo. Even Bill O”Reilly and L.A. County GOP Chairman Mark Vafiades had cameos.

The below-the-line crew was also heavily Abe, and the story was solidly red state: A leftist Michael Moore-type anti-American filmmaker is given the “Scrooge” treatment when patriotic ghosts like JFK and General Patton show him the true meaning of something-or-another.

A-list stars? The guy who gave us “Airplane” and “Naked Gun” at the helm? It couldn”t fail. But of course it did. And badly. Even hard-core conservatives found it difficult to scream “bias!” at the film’s poor reception…the movie was that bad, by any objective standards. Two years later, Grammer and a few choice Abes tried again, this time launching “The Right Network,” a TV network promising “pro-America,” “pro-business,” and “pro-military” entertainment. It ended in bankruptcy and lawsuit threats.

So with Grammer crediting divine intervention for the success of projects like “Killing Jesus,” one must ask….why has the Almighty not favored Friends of Abe in this holy crusade?

There are several reasons FOA never lived up to its potential. We drank a lot. Members loved getting loaded and bullshitting each other until 2am. Venues were chosen specifically so that Andrew Breitbart could walk home drunk without having to hail a cab, and GOP-friendly bar owners would shut out regular patrons and proclaim “open tap night” for the Abes. Believe it or not, all that drinking was simply not conducive to constructive, serious planning.

Also, the A-listers had their own projects going on. They had no desire to have ideas pitched at them by Clovis the gaffer. At no point in my five years with the Abes did Eastwood ever say something like “Hey Mikelti Williamson, you were Bubba in “Forrest Gump,” so I have to ask…what do you think my next film should be about?”