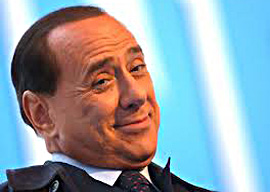 I never used to believe in miracles before I came to live in Italy, but last week I witnessed the resurrection of a political corpse. It was all thanks to a bizarre potion whose ingredients are a black soccer superstar, a busted red bank mired in scandal, and a dash of Benito Mussolini.

As a result, with three weeks to go before the crucial Italian general elections on February 24, Silvio Berlusconi and his center-right coalition, far from being dead and practically buried, are now within spitting distance in the
opinion polls of the front-runners: the ex-communist-led coalition of the left.

In November 2011, this mega-rich media tycoon forever derided and defamed by the media as a corrupt buffoon and grotesque sex maniac was forced to resign as prime minister despite enjoying more voter support than any of Italy’s 60-odd governments since fascism’s fall in 1945.

Two things caused the resignation of “Il Cavaliere” (The Knight), as he is called by those Italians who refuse to swallow the media line on him, or “Silvio Il Magnifico,” as I am still not at all ashamed to call him.

“I never used to believe in miracles before I came to live in Italy, but last week I witnessed the resurrection of a political corpse.”

These two things were: the spread between interest rates on German and Italian bonds which had become a dangerous chasm and so threatened the very survival of European single currency; and the sex scandal trial known as “Bunga Bunga,” manufactured out of nothing by the media and a group of politically driven judges in Milan. Each fed off the other.

Democracy was suspended. Ever since, Italy has had an unelected governo tecnico with the grey economics professor Mario Monti as prime minister. His only noticeable personality trait is his dull and mechanical hypnotist’s voice.
They call Monti “Il Professore.” I call him “Il Dentista” (The Dentist). Either way, he is the perfect pin-up boy for bankers and bureaucrats. For a while he managed to hypnotize not only the markets but even the Germans who call the shots in the doomed Eurozone. Yet all he has done is raise taxes and invent new taxes.

As the Eurozone crisis goes from bad to worse, Italians are disillusioned with Italian democracy’s impotence. There are 169 parties standing in the elections.

Monti is also a candidate for premier. His hastily invented party of the center, Scelta civica con Monti, stands at about 14% in the polls. This would guarantee him seats in Parliament (under Italy’s version of proportional representation 4% is all you need) and maybe make him kingmaker.

The other major new political figure is a professional comedian Beppe Grillo, whose slogan is Vaffa! (Fuck off!)”to everything, it seems, except wind farms. This bearded longhaired comic who looks and behaves like a middle-aged Hell’s Angel is hovering around the 18% mark.

But well out in front was the coalition of the left at about 35%. Their candidate for prime minister is Pier Luigi Bersani of the ex-communist Partito democratico (Pd), its major component.

Meanwhile Berlusconi’s center-right coalition was trailing by about 10%. He is not actually running for prime minister. (Angelino Alfano has that honor.) But it is as if he were. And who knows what will happen if his side stuns the world and wins?

But then the miracle happened.