I’m Calling for a Stupidity Boycott 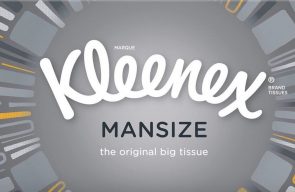 AUSTIN—I think I have to boycott Kimberly-Clark.

I’m sorry, guys. I know you’re a $46 billion company with 43,000 employees doing business in 175 countries, so obviously this is gonna be rough on your Corporate Social Compliance division (yes, that’s a thing). I doubt you have the resources to withstand a concentrated social media campaign conducted by the Drive-In Movie Critic of Grapevine, Texas.

But sometimes you just have to take a stand.

Last week Kimberly-Clark announced that they would no longer market “Mansize” Kleenex, a product they’ve sold since 1956 and which continues to be popular with millions of man-sized people around the world.

“Mansize” means a big soft fluffy Kleenex, bigger than normal Kleenex, because you just might be a messier-than-average person. It was invented in the Kimberly-Clark laboratories in Neenah, Wisconsin, as an alternative to the cotton handkerchief most men in the 1950s kept in their jacket pocket, a practice that would today be considered unhygienic and was always bordering on gross.

Women never kept a cotton handkerchief in their jacket pocket or in any other pocket.

At any rate, 62 years after its introduction, someone started a social media campaign to hammer Kimberly-Clark for being sexist. Why is a big fluffy Kleenex called “Mansize” when—and this is the remarkable part—maybe women are bigger than men? When enough Twitter and Instagram and Facebook accounts ended up dogpiling the company for enough days, there was a strange announcement out of Kimberly-Clark headquarters in the city of Irving, Texas, which, by the way, shares a border with Grapevine, so you can already see how nasty this is gonna get.

“Mansize” was history, said the Social Compliance experts at Kimberly-Clark. Henceforth the big fluffy Kleenex would be called “Extra Large.” They didn’t give a reason. The statement was, in fact, kind of sheepish in the rationale department, especially since the “Mansize” brand had served the company so well.

Before I go into the specific reasons for my Kimberly-Clark boycott, I would like to analyze the word “Mansize” as it relates to gender discrimination.

“I don’t want to do business with a company that can’t be trusted to stand by its own version of the truth even when it’s scientifically provable.”

There are 193 nations in the world. (There are actually 195, but we don’t have stats on Palestine or Vatican City.)

Of those nations, the number of places where the average woman is taller than the average man is—let’s see, let me triple-check these numbers so that we can be absolutely truthful, carry the 5, take it out to the third decimal point—okay, I’ve got it, that number would be…

In other words, men appear to be, uh, man-sized.

Of course, height is not the only standard of man-size. Since North America is the fattest region on the planet (177-pound average weight and rising, compared with the global average of 136), we would certainly need to take girth into consideration when predicting which gender is most likely to need a man-sized Kleenex.

Once again, let’s take a look at those 193 nations and determine which ones have an average female weight greater than the average male weight. That number would be…

In the United States, the average guy weighs 196 pounds, the average gal 168. Actually, the average American woman now weighs as much as the average American man did in 1965, so I hope the Mansize Kleenex has been bulked up over the last five decades. Perhaps the outraged feminists who protested against the word “Mansize” were weighing in above 196 themselves and felt belittled by being lumped in with another gender.

The bottom line is that no one has to worry about it anymore because, like most corporations that find themselves targeted by an idiotic social media campaign, the solution chosen here was simply to give the idiots what they wanted.

I’m not sure what the standard algorithm is—9,000 likes on Twitter? Five thousand reposts on Facebook? Thirty mocking mash-ups of a Kleenex box on Instagram?—but whenever the protest hits critical mass, the solution is always to publicly abase yourself and say, “Yes, indeed, you were right, please spend the day pumping your fists and high-fiving one another because you have forced us to abandon a brand we’ve stood by for 62 years.”

And that’s why I’m announcing my boycott of Kimberly-Clark. I don’t want to do business with a company that can’t be trusted to stand by its own version of the truth even when it’s scientifically provable. This is a company that deals in chemical processes, forestry, manufacturing, and the safety of the world’s lower bodies. (Almost all their products—Huggies, Depends, Kotex, twelve brands of toilet paper—deal with sensitive areas below the waist.) Don’t we want these guys to be ruthlessly scientific so that their product is efficient and safe? How can we trust them if somebody simply says, “Men aren’t bigger than women,” over and over until they become exasperated and say, “Okay, you’re right, men and women are the same size”? Who wants a scientist who can be beaten into submission so that he changes his opinion?

But there’s an even more important reason. Every time a company craters on a silly issue like this, it encourages 17,000 more internet trolls with time on their hands to start a campaign against tomorrow’s bogeymen. One day it’s plastic straws, the next day it’s Kleenex, the day after that it’s Dr. Seuss books—eating up everyone’s time, making our economy less efficient, turning truth into an elastic toy that can be smashed into any shape you want.

Kimberly-Clark is an enabler. A troll enabler. A busybody enabler. An enabler of public scolds and annoying grandstanders.

An enabler of Stupidity.

Hence the Stupidity Boycott. I’ll be adding other companies to the list and recruiting an army of rationalists as we try to reclaim the internet.

Meanwhile, I have my eye on Klucze, the best-selling facial tissue in Poland. It’s owned by Kimberly-Clark. That means they have one more chance to get off the boycott list. They can tell the men of Poland that there is indeed a concept called “man-sized.” It means bigger than women. It’s something they understand in Warsaw, unlike Irving, Texas.