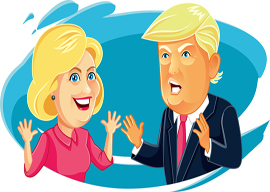 NEW YORK”If you study Method acting at one of the great New York studios that grew out of the Stanislavsky system, the first thing they teach you is that acting is not about speaking, it’s about reacting.

“Always watch the actor who is not speaking,” the great Freddie Kareman used to tell his classes at Carnegie Hall. “If he’s engaged and focused and concentrated, that’s when you”ll see his craft.”

The great thing about watching a Presidential debate with a split screen is that you get to watch the face that’s not speaking and you get to see what’s underneath the words.

And what did these two faces say?

Trump’s face, pinched, orange, topped by what can only be called a wispy ghost of a crewcut, was saying, “I can”t stand the sound of your voice. You”re annoying me. You”re a nothing.”

And Hillary’s face, coiffed, pancaked, accessorized, was saying, “I”m going to smile sarcastically, even if I hate him, so the crowd will think I don”t care.”

In other words, if you”re trying to decide which candidate is crazy, it’s not me!

“You don”t have to know how to do anything as President.”

I”m not sure who won. I used a ten-point-must scoring system, with the bout divided into 15 rounds, like professional boxing, and I had it 147-142 for Trump. I thought Trump won all the early rounds, but the referee turned on him about halfway through”Lester Holt of NBC News”trying to nail him on the birther issue and his taxes. (There were no corresponding “gotcha” questions for Hillary.) Trump let the questions get under his skin and started flailing wildly. Watching Hillary, you could tell she wanted to jump in a couple of times, then decided to rope-a-dope him. Trump recovered near the end, as both fighters were growing fatigued, and scored a couple of points when Hillary turned nasty and personal, practically accusing him of being an owner of female slaves, before the whole thing petered out in a forced “I will support the winner” hug.

Post-bout analysis was all over the lot, with Hillary loyalists claiming utter and complete demolishment of their opponent because she was “more prepared.”

I”ve got news for these Rhodes Scholars. People don”t care about who’s prepared. They care about who’s lying and, in this case, who’s lying more than the other liar. Everything else is just code words. Trump probably can”t lower taxes from 35 to 15 percent. Hillary can”t achieve her goals by taxing only the rich. Neither of them said anything particularly brilliant about police shootings. The jousting on free trade agreements and NATO was all familiar stuff that gets bandied about every day”nobody knows which course produces more prosperity.

But since this was the first and only time Trump has ever been involved in a one-on-one debate, much less a one-on-one debate that goes on for more than 90 minutes, and since he was competing against a veteran fighter who has done it 40 times, I think Trump has to be given the victory according to the Rocky principle: Sylvester Stallone didn’t win the fight, but he was still on his feet at the final bell.

People who have only seen Trump in sound bites watched him go the distance without faltering. Were his remarks long on general observation and short on detail? Yes they were. Did Hillary know more than he did? Probably. Does it matter? Only to people who think the President should be a college professor. You don”t have to know how to do anything as President. You have to have the right instincts and you have to hire the right people.

For people who don”t trust Trump because of his lack of self control, there he was being halfway restrained, especially when he got attacked personally at the end. I would imagine there were a lot of Undecideds who thought, “You know what? He’s not that crazy.“

The big unexamined issue throughout this election year is the one looming so large, hovering over the nation like a toxic cloud, that no one can see it”namely, Why does the world’s most powerful nation continue to cling to a two-party system?