I’m So Bored With MLK 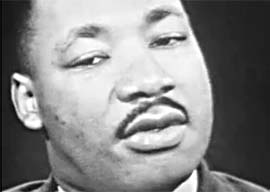 I had a dream I stood on the mountaintop and puked.

As we all gather around the Guilt Pole to commemorate Martin Luther King’s approximate birthday, 94% of Americans agree that he was a mighty swell fella.

That’s a tremendous shift from the last few years of MLK’s life, when never more than a third of Americans seemed to approve of him. But ever since his 1968 murder, a carefully constructed religious aura has been fashioned around King like garland being wrapped tightly around a Christmas tree. His ongoing canonization is such that Jesus is now merely Martin’s towel boy. Compared to MLK, Jesus is not very sacred at all in this culture. He’s a much safer target to criticize.

The corpse of Jackie Onassis was recently exhumed and publicly flogged when it was revealed that she’d said some less-than-worshipful things about Doctor King. Most news reports failed to mention that Bobby Kennedy had allegedly told her that MLK arrived drunk to JFK’s funeral and made jokes about the pallbearers almost dropping her newly dead husband’s coffin. She may also have been tipped off to an FBI surveillance tape which reportedly reveals King watching TV footage of Jackie and her children leaning over JFK’s casket, whereupon MLK said disgustedly, “Look at her. Sucking him off one last time.”

I won’t be able to verify whether MLK actually said that until the year 2027. That’s because in 1977 his widow got a court order that sealed up King’s voluminous FBI files for 50 years. So until then, we won’t know for sure whether he actually made such insensitive comments about his predecessor in assassination, nor whether he actually once shouted, “I’m fucking for God!” while rutting a hooker in a hotel room.

“Perhaps the most insulting thing anyone can say about MLK is that he was the unwitting tool of a government that saw tremendous growth potential in the “racial justice” biz.”

But can we at least dial down the MLK-worship a little, America? Seriously! The recently unveiled monument to him in DC is 30 feet tall, which, to be honest, is 24.5 feet taller than he was in real life. If we’ve learned anything from his murder, it’s how counterproductive it can be to martyr someone. All it does is make them grow.

I find it hard to be reverent about the Reverend. Whenever such a thick cloud of sanctimony enshrouds anyone or anything, my guts tell me to reach for the air freshener. Yes, I realize that there used to be segregated drinking fountains and that in some places, poor little black kids couldn’t even buy ice-cream cones from white vendors. But I think it’s time we all conceded that many places in Africa don’t even have drinking water, much less a single flavor of ice cream.

Is it a deal? Can we, as the eager urban youth like to say, “get real” about all this?

I’m typing this from Stone Mountain, Georgia, immortalized in MLK’s “I Have a Dream” speech in the part where he beseeches God—MLK was primarily a “man of God” lest any of you are alarmed at evangelicals who mix church and state—to “Let freedom ring from the Stone Mountain of Georgia.” King stole that passage about Stone Mountain from a 1952 oratory delivered by another black preacher at the Republican National Convention. He also allegedly plagiarized parts of the first public sermon he ever delivered back in 1947. It’s been established that huge chunks of the good Doctor’s doctoral dissertation consisted of wholesale literary theft. The right Reverend clearly didn’t mind helping himself to things that belonged to other people.

Oh, and those silly “commie” allegations? Well, if it makes you a Nazi merely to surround yourself with Nazis, then MLK was a communist purely by dint of cramming his entourage with communists. His longtime advisor and secretary Bayard Rustin was an organizer of the Young Communist League. His speechwriter, book editor, event organizer, PR handler, tax advisor, and fundraising kingpin Stanley David Levison was a Communist Party USA leader in the 1950s who reportedly received huge subsidies from the Soviets. King also openly decried the “capitalists of the West,” things such as “profit motives and property rights,” and encouraged his listeners to “question the capitalistic economy.”

But we’ve all realized that witch-hunting communists is a violation of basic human rights. Therefore, it has been replaced with an endlessly well-financed campaign to conduct witch hunts against anyone remotely suspected of “racism,” however the hunters choose to define it.