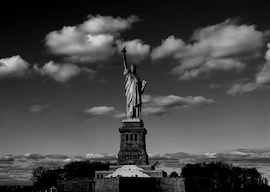 Should Harvard be required to accept the wretched refuse of its applicant pool even though they are likely to flunk out?

Should the Golden State Warriors be forced to draft the huddled masses of short and slow college basketball players who are likely to get torched in the NBA?

And should the United States government be mandated to let in immigrants likely to go on welfare?

Well, obviously, the answer to the first two questions is “No.” Americans care intensely about sports drafts and college recruiting, rightly sensing that who your team acquires is more important than how they are coached. So colleges and sports franchises work intensely to acquire the best talent.

Americans used to be more innocent about this. In the 1960s, a sportswriter asked UCLA basketball coach John Wooden why he’d gone all the way to New York to recruit 7′ 2″ Lew Alcindor (now Kareem Abdul-Jabbar) instead of just finding some local boys and coaching them to the national title. Wooden replied, “You can’t coach quickness.”

This exchange sounds archaic today, but Wooden’s predecessor as the top college coach, University of Kentucky coach Adolph Rupp, imposed a rule on himself that he’d have only three out-of-state recruits per team. Those were different times…

Harvard has shown a striking ability over the last 383 years to burnish the Harvard brand name. Harvard alumni don’t want the prestige of their résumés degraded by their alma mater letting in a lot of dummies or grinds, so the college administration devotes much brainpower to optimizing its freshman class to maximize donations in a generation. It seems to be working: Harvard’s endowment is $39.2 billion.

But the Trump administration’s announcement on Monday of its update to the “1999 Interim Field Guidance on Deportability and Inadmissibility on Public Charge Grounds” to better avoid letting in legal immigrants likely to wind up on welfare was widely greeted with shocked sputtering. Our elected government choosing immigrants who would be better neighbors for us current Americans makes the Statue of Liberty cry.

“Is that sentiment, give us ‘your tired, your poor,’ still operative in the United States, or…should the plaque come down from the Statue of Liberty?”

Denying people a path to citizenship simply because they depend on public benefits is patently un-American.

Actually, “public charge” laws to keep the rest of the world from foisting their unwanted layabouts on us have been part of the American tradition going back to the Massachusetts Bay Colony in 1645. It’s been a federal law since the 19th century.

“Increasingly, we are told, the worse the immigrants the better.”

But American history has been retconned over recent decades by the descendants of Ellis Island immigrants to promote their ancestors as the true founding fathers of the country. It’s hilariously blatant when you stop and think about it, although nobody ever does.

For example, Emma Lazarus was problematically persuaded to write her huddled-masses poem by her close friend Constance Cary Harrison, who was the Betsy Ross of the Confederate battle flag. But that never seems to come up. It would be ironic, and nobody is allowed to be ironic about something as sacred as Lazarus’ rhymes.

This silly ethnic self-aggrandizement has metastasized into the dogma that immigration is an inviolable civil right for the world’s 7.4 billion Pre-Americans. For Americans to not let in anybody who wants to come would be discriminatory, and discrimination is the worst thing ever.

Moreover, because Latin American immigrants are more likely to use welfare than European immigrants, this new color-blind policy is being denounced as racist:

Q: “Why should Latinos across the country not feel targeted by this change?”

Cuccinelli: “If we were having this conversation 100 years ago, we would be targeting about the Irish.”

Reporter: “But we are having this conversation today.”

Obviously, the setup of this gotcha by the reporter implies that Latino immigrants are more likely to become public charges. But you aren’t allowed to notice that.

This ideological momentum against any rational form of immigration restriction could well lead to the U.S. government imposing a massive own goal upon the American people.

Increasingly, we are told, the worse the immigrants the better. Immigration policy isn’t supposed to benefit you, it’s supposed to hurt you. It should hurt so good.

The madness of this masochistic logic is seen as proof of its holiness.

But, sensible as the new Trump policy is, welfare usage by immigrants is a bit of a red herring. I see too many Americans say in response to open-borders insanity that they only oppose letting in welfare chiselers, while anybody who wants to work hard should be welcome to America.

This rhetoric sounds good, but it is actually a dumb idea founded upon boastful theories of American exceptionalism. We Americans really aren’t anything special on a man-for-man level, we just own a nice big country. As Benjamin Franklin pointed out in 1754, the real reason Americans live better than Europeans is because there aren’t many of us.

We don’t actually want many ultra-hardworking people from the rest of the world to come here and outcompete Americans.

For example, black Americans used to make a little money retailing specialty hair care products to other blacks. It was a decent little niche for black small business people. But in the last quarter of the 20th century, black storeowners were crushed by fanatically hard-charging Korean immigrants who now monopolize black beauty supply retailing in the ghettos.

Sure, the customers got cleaner stores with longer hours, but our fellow American citizens got shut out of what had been one of their traditional avenues of advancement. What American blacks actually need are fewer weaves and more careers.

In reality, of course, preferring immigrants who are less likely to need welfare has multigenerational benefits.

To take a crude measure, look at third-generation immigrants by ethnicity. Jason Richwine (who, as you may recall, was fired from the conservative Heritage Foundation in 2013 for the crime of having earned a social science Ph.D. from Harvard) recently analyzed the 1997 National Longitudinal Study of Youth’s panel of people in their later 30s. He found that the average grandchild of European immigrants compared to the average grandchild of Mexican immigrants:

—Is 119 percent more likely to have graduated from college;

—Scored at the 61st percentile of the military’s AFQT cognitive test compared to the 41st percentile for the Mexican descendants;

As John Wooden might say, you can’t coach quickness.