Immigration and the Deep State 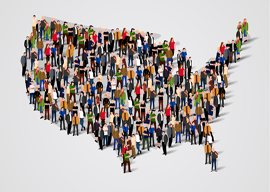 Why did received opinion melt down so spectacularly when Donald Trump allegedly said in private that he wanted more immigrants from places like “Norway and Asia” and fewer from places like Haiti and Africa?

Last Thursday, Senators Dick Durbin (D-IL) and Lindsey Graham (R-SC) scheduled a meeting with the president to try to trick him into supporting their politically suicidal immigration bill. To their dismay, however, when they arrived they found that Trump had also invited realist immigration experts such as Sen. Tom Cotton (R-AR), Rep. Bob Goodlatte (R-VA), and the president’s speechwriter Stephen Miller.

In the ensuing debate, Durbin and Graham were demolished. So Durbin, his plot foiled, tried the underhanded ploy of asserting to the press, perhaps inaccurately, that Trump had used the now-notorious vulgarity to characterize Haiti.

Of course, Haiti ranks 163rd on the U.N.’s Human Development Index while Norway ranks first, so, as usual, what drives the establishment most crazy about Trump is his tendency to tell the rough truth.

Trump was immediately denounced for damaging America’s diplomatic relations with our crucial strategic ally Haiti and making it potentially harder for the U.S. military to do whatever it is that it’s doing in Africa that got four U.S. soldiers killed last October in an African country that most Americans couldn’t find on a globe and few would risk trying to even pronounce its name out loud.

Of course, Senator Durbin could simply have kept his mouth shut. Grown-ups understand that in private negotiations presidents use crude but often accurate language (the capital of Haiti is one of the world’s largest cities without a functioning sewage system), and that it’s wrong for senators to reveal conversations with the president to other countries.

The subsequent uproar confirmed my long-held observation that the Washington power structure is drifting toward the bizarrely extremist ideology that the American people have no right to control their own borders, because their having any opinion about which immigrants to let in constitutes discrimination.

As one statesman explained the new orthodoxy way back in 2004:

America is not only for the whites, but it is for all. Who is the America? The American is you, me, and that. When we go to America we will become Americans and there is no a race or nationalism called America and the Americans are those Africans, Indians, Chinese, and Europeans and whoever goes to America will become American…. American is for all of us and the whole world had made and created America. All the people all over the world had made America and it shall accordingly be for all of us.

Sure, Hillary had Gaddafi sodomized to death in 2011, but that was just politics. On matters of principle, she gave no indication on the campaign trail in 2016 that she dissented from his view that “The American is you, me, and that.” (In fact, the Colonel ought to get points for his use of the presciently gender-inclusive pronoun “that.”) Legal mumbo jumbo about some people being “citizens” while other people are “not citizens” is transparently racist.

“The Washington power structure is drifting toward the bizarrely extremist ideology that the American people have no right to control their own borders.”

America is to be “a colony of the world,” as Sen. Eugene McCarthy (D-WI) noted a quarter of a century ago. And that’s because Washington is to be the capital of the world.

That explains much of the frenzy of the response to Trump’s comparison of Norway with Haiti. For Washington to rule the world, America can’t be allowed to rule itself.

Obviously, from a human-capital standpoint, it makes sense to try to attract more Norwegians and fewer Haitians. Oil-rich Norway is probably the world’s most lavish welfare state, so any Norwegian immigrants are likely to be high-potential earners who would, on average, pay more in taxes than they would get in welfare. In contrast, Haiti is the poorest country in the Western hemisphere, with little welfare and the highest population growth rate, so there is always danger of a Merkel-type rush for America.

On the other hand, from the Beltway foreign-policy perspective, immigration is considered a crucial carrot to complement the stick of military action. As I first pointed out a dozen years ago, Washington’s grand strategy is:

It might seem kind of nuts to you and me to be inviting in the cousins of the people you are bombing because of the inevitability of terrorist blowback. But to America’s foreign-policy establishment, it seems crucial to be able to mollify foreigners you are drone-striking by also having many of them move to America. Some of them might even prove useful in taking over their native governments.

Norway, though, is far too stable to attract much attention from our Deep State. Washington will never get to airlift into Oslo a provisional government of Norwegian-American quislings. So what’s the point of trying to attract Norwegian entrepreneurs and scientists to America just because they would make good citizens and spouses? (Further, Norwegians, unlike most immigrants these days, are not eligible for affirmative action.)

In contrast, the Deep State wants Haitian immigration because it periodically overthrows the Haitian regime. In 1994, the Clinton administration, at the behest of the Congressional Black Caucus, invaded Haiti to return the leftist Jean-Bertrand Aristide from exile in the U.S. back into power. Then, in the 2004 coup, the Bush administration more or less kidnapped Aristide, flying him off to exile in Africa.

How can Washington manipulate Haiti without having a certain number of Haitians living in the U.S. to supply expertise? Moreover, rewarding Haitian insiders with visas for their relatives is seen as a cheap way to buy influence.

On the other hand, it’s not at all clear what the American public (much less the Haitian public) has gotten out of Washington’s contradictory interventions in Haiti.

Indeed, it’s hard to think of too many instances in which immigrants actually helped American foreign policy in the long run.

Perhaps the most favorable example is the role played by Sicilian-Americans in Gen. George S. Patton’s 1943 invasion of Sicily. While the British army bogged down trying to keep order in conquered towns, the American army raced ahead because it had brought along certain Sicilian-Americans to take over civil administration of liberated cities. These tended to be men of respect, good fellows who had friends who had friends. In other words: the Mafia.

Mussolini had crushed the Cosa Nostra, but the Americans reinstalled the Mob in power, which didn’t do Sicily much good in the long run. Indeed, it didn’t even do the Allies much good in World War II because after a spectacular beginning, our Italian campaign bogged down into an endless slog against a ferocious German defense.

Other famous examples of immigrants helping out American foreign policy are even more dubious.

During the early 1940s, American officials were rapturous that the First Lady of China, Mrs. Chiang Kai-shek, had graduated from Wellesley in 1917 (she died in New York in 2003 at age 105). Her husband kept around other Chinese graduates of American colleges to schmooze with American visitors and inculcate in them a vision that China would soon Christianize and become America’s best friend in the whole world. In reality, however, Chiang had no intention of wasting his strength enthusiastically fighting the Japanese for us. That, in his view, was our job. Eventually, in 1949, Chiang was overthrown by Mao in a catastrophic setback for American foreign policy.

In 1945, the U.S. suddenly found itself in possession of the southern half of Korea, a bafflingly alien culture. While the American government had studied closely how to occupy and reform Japan and, on the whole, did a good job of it, it was largely clueless about Korea.

Fortunately, the American authorities managed to find one patriotic anti-Japanese activist in exile in the U.S., Syngman Rhee, and installed him in Seoul as strongman.