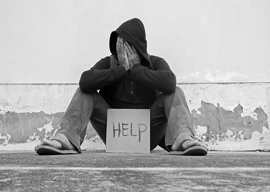 Like much of the world, El Salvador is an unhappy place. Poverty and gang violence abound. And Mother Nature can be cruel. The country was ravaged by a couple of earthquakes in 2001, for example, and in its generosity, the United States responded by granting Temporary Protection Status (TPS) to nearly 200,000 Salvadorans. It was extended several times during the past seventeen years, per the entreaties of both immigrant advocates and the El Salvadoran government, whose efforts to rebuild the nation relied on money sent by workers in the U.S. TPS is for countries affected by armed conflict, natural disaster, or other strife. Since those conditions are not exceptions but, tragically, norms in human affairs, the status must be temporary. Otherwise the United States would not be a country so much as a depleted charity, with no end to the persons who seek to immigrate to its desirable shores.

So the Trump administration announced on Monday that Salvadorans in the TPS program will have until September 2019 to make arrangements to leave the country or obtain other legal status in order to stay. Thereafter, they no longer will be allowed to remain in the U.S. under TPS. The news came just weeks after more than 45,000 Haitians, the second-largest group, lost protections granted after Haiti’s 2010 earthquake. Other peoples in the program—Hondurans, for example—may soon lose them as well. Nicaraguans lost their protections last year. In March, protections for 800,000 young illegal immigrants—a.k.a. Dreamers—will end unless Congress grants them legal status before then. Although naturally unpopular on the left and among the immigrants themselves, getting immigration under control is one of the major reasons that Donald Trump was elected to the presidency. For most Americans want immigration to be determined by federal law, and they don’t believe it is “racist” to deport people who are in violation of immigration law. Unlike most intellectuals these days, most Americans have common sense.

“People may say all cultures are equal, but who is prepared to actually live like that?”

They also know what an abundance of poor immigrant labor does to their own job prospects and communities. President Trump’s supporters, in particular, will perceive the disingenuousness in the following passage from The New York Times.

In Houston, the elimination of protected status would aggravate a labor shortage already delaying repairs after Hurricane Harvey, said Stan Marek, the chief executive of Marek Brothers, a large construction company with offices across Texas and in Atlanta. At least 29 Salvadorans on his payroll are program recipients.

“During hurricane recovery, I especially need those men,” Mr. Marek said. “If they lose their status, I have to terminate them.”

Marek’s thinking is a representative example of why so many Americans are angry about illegal immigration. For there would be a “labor shortage” if and only if for some reason Marek did not want to hire native workers. What might that be? Like so many others, Marek would doubtless prefer to hire illegal immigrants who, by working for much lesser wages than natives will, allow him to make a greater profit. As with the many Mexican illegal immigrants, so with illegal labor generally: Americans find that because of it they cannot earn a decent living doing the sorts of jobs that their fathers and grandfathers once did. Add in the billions the government spends each year on illegal and temporary immigrants and it is easy to see why making immigration legal again is so important.

And yet, there seems to be a moral dilemma. From a moral point of view, it is certainly not a good thing that thousands of immigrants—so many of whom are decent people who want to be good citizens of this country—should have to return to their native lands, where they may experience “armed conflict, natural disaster, or other strife.” But nevertheless, the tragic truth is that the immigration question is an either/or: Either we do what is best for Americans, or we do what is best for foreigners, regardless of how we fare from doing so. That the issue is never put in such stark terms suggests how little disposed we now are to dealing with the tragic sense of life. Indeed, to our sentimental therapy culture, tragedy seems downright scandalous. But however that may be, it remains true that the United States has not the resources to be a kind of permanent asylum for the millions or billions of human beings on this planet who, for whatever reason, feel compelled to leave their native countries for a better life. Not every needful person can become a permanent U.S. citizen, just as we don’t have unlimited funding for foreign aid. Our elected officials must acknowledge this reality, which many in our decadent citizenry don’t want to face. Thus, for putting America first, the Trump administration is frequently called racist, cruel, and so forth.

The simplistic criticism betrays the delusional sensibility from which people’s opinions now issue. Never before have we been so ignorant of the problem of incompatible values. From a moral point of view, it may be commendable to welcome a large mass of burdened immigrants into our country. The complexity, and the tragedy, lie in the fact that doing so may run counter to other purposes. Seeing rising crime—especially sexual assault—and terrorism throughout the Continent, Europeans are learning the hard way that Islam is fundamentally irreconcilable with the modern world. Now all that, you may think, is a hard price to pay for compassionately admitting refugees from war-torn nations, but of course, the politicians who were in favor of the great migration did not foresee such troubles. The reason is that, in their pity, they wanted the issue to be a lot simpler than it is. It is in the nature of pity, after all, to blind us to the complete character of things. Meanwhile, moral ends are often mixed and complicated, and if there is anybody who should understand that, it is politicians, who exercise tremendous power over citizens. Our time, however, is not notable for sober assessments. Thus, if the left and the intellectual class had their way, the United States would have no borders. Everybody would come and go as they please. There would be jobs and entitlements for all. Of course, this kind of dangerous fantasy is possible only among persons who have never wanted for anything. As such, they can entertain all sorts of crazy ideas. At day’s end, they will still retire well-fed to comfortable rooms.

Pity for the sufferings of others springs up naturally. Yet in life we are forever torn between our rightful partiality to intimates and what we owe, if anything, to those outside that small circle. Just what should I do for those who don’t mean much to me? This is not a question one can answer with precision. It is asked of an irrational feeling. That feeling may be very strong, but in itself it provides no sort of rational guide for how to act wisely on it. On the contrary, pity works so powerfully on us precisely because it is not a matter of cold reason. Note that recognizing the limits of things does not make their effects any less horrible, nor do we necessarily cease to feel pity for others simply because we grasp that the law must trump the heart. Hence how the pull of pity ultimately can be so destructive, irrespective of its good intent. (So too with Christian charity, a related thing. It is not surprising that on immigration the Pope sounds like a leftist. After all, leftism itself is a debased Christianity, and in each case an absolute imperative is supposed to override the long-term interests of nations themselves.)