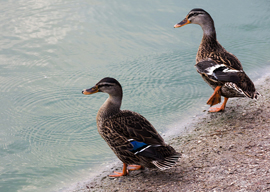 An item in a supposedly serious newspaper caught my attention recently. It reported a former Archbishop of Canterbury as saying that the British government systematically discriminated against Christians in its acceptance of Syrian refugees to settle in the country.

It is not that I find this claim intrinsically implausible; on the contrary, I find it only too plausible. This seems to me a time when several European governments act specifically and deliberately against the most patent and obvious national interests of their country, often with the support of the intelligentsia, as if they and the dependent civil servants were what Stalinists used to call Trotskyist wreckers. They do things that defy common sense, and are almost a mirror image of what they ought to do.

Thus in Britain I have often observed the immigration authorities relentlessly pursue a highly skilled immigrant or refugee who would obviously have been an asset to the country, in order to expel him (or her) as quickly as possible, while at the same time permitting to stay many people or families whose most likely fate was long-term unemployment and welfare dependency, legal (that is to say, human rights) claims for family reunion resulting in the entry of yet more of their ilk, and who were likely to prove most difficult to acculturate.

“No one should ever underestimate the stupidity induced in bureaucrats by the procedures they are enjoined to follow.”

There are several possible explanations of this pattern (if I have perceived it correctly, which is not certain). The first, of course, is stupidity. No one should ever underestimate the stupidity induced in bureaucrats by the procedures they are enjoined to follow, whose effect, if not intention, is to stupefy them into inability to think, discriminate (discrimination is one of the bases of all intelligent thought), or act on their own initiative.

Here the perverse incentives that bureaucrats are often given nowadays are also worth a mention. On the false grounds that it is better to measure something than to measure nothing, the work of a bureaucracy (and therefore bureaucrats) is judged by some target or other plucked from the ether of political vacuity by their bosses. Now, in the case of immigrants and refugees, it is easier to find the industrious, well motivated, and highly qualified among them to expel summarily than those of the opposite type, who easily melt into a ghetto, whose identities are changeable and fluid, and who are most likely to resort to violence (like the Uzbek who drove the truck into pedestrians in Stockholm) if crossed. And since it is a law of bureaucracy, if not of most of humanity, that it pursues the line of least resistance, it follows that if immigration officials are given a target of immigrants or refugees to expel, they will tend to expel the best rather than the worst of them.

There are other possible explanations of the pattern than induced bureaucratic stupidity, however. Among the bureaucrats may be many who have undergone Resentment Studies at a university, a kind of indoctrination that causes them to believe that they live in the most unjust type of society imaginable, worthy only of undermining or destruction. Moreover, refugees or migrants who can look after themselves are grist to no bureaucratic mill, and therefore no pretext to tax the population more highly. In this rather technical or special sense, then, it is they, the useful ones, who are actually the useless ones, for they will be no politician’s or bureaucracy’s automatic clientele.

At a lower level of malice, however, they may be prey to a kind of false syllogism at work:

Action in pursuit of a national interest may be wrong or even evil.

Therefore, action against a national interest must, ex officio, be good.

Hence to act against the national interest is a simple rule of thumb to ensure that one is acting ethically.