In Defense of Franklin Armstrong 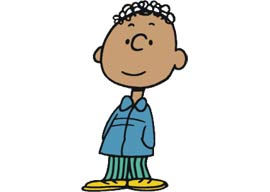 If—like me—you were alarmed and horrified over the Thanksgiving holiday to hear that cartoonist Charles M. Schulz of Peanuts fame was an unrepentant racist, you will be relieved—like I was—to learn that this is the furthest thing from the truth.

The truth is that Charles M. Schulz was, is, and always will be a friend of the Negro.

This story will sound alarming at first, but rest assured that it quickly becomes so endearing it could give you a toothache.

Social media erupted in another bloody fistula of outrage when observers noted that in one frame from 1973’s animated TV special A Charlie Brown Thanksgiving, young Franklin Armstrong—AKA “the token black kid”—was pictured seated all alone on one side of the kids’ slapdash Thanksgiving dinner table.

It is a sobering and, at first, terrifying image. One immediately thinks of hooded horsemen, snarling German shepherds, fire hoses, and nooses hanging from trees. After all we’ve been through as a country, do we still need to see a young, well-mannered black child segregated from the white kids as if this were Alabama in the 1940s or South Africa under apartheid’s evil death grip?

If you want to be all fair and non-hysterical about it, Linus is also seated all by himself, as is suspected lesbian Marcie. In fact, solo diners inhabit three of the table’s four sides. What’s extremely fishy is that four characters—Sally, Charlie Brown, Peppermint Patty, and the adorable big-nosed dog Snoopy—are clustered together on one side of the table.

If I wanted to get all insane and witch-hunty about it, I might aver that cramming this quartet together on one side of the table, while the three other sides provide ample space for the three other diners to wave their elbows and flap their gums unhindered, is reminiscent of the cramped and often fatal conditions that African slaves endured on the infamous “middle passage” to the New World, but I’m not going to do that.

“The truth is that Charles M. Schulz was, is, and always will be a friend of the Negro.”

Much was also made of the fact that Franklin, the soft-spoken Negro of the Peanuts gang, was forced to sit on a folding lawn chair while the others sat on what appear to be hardwood chairs. If you ask me—which you didn’t but I’ll answer, anyway—Franklin received the only comfortable chair of the bunch.

And let’s not mention the fact that Franklin has more desserts than anyone else at the table, but maybe that’s some sort of racist dog whistle about how black people don’t eat healthy food.

As a strong, confident, proud black woman named Ariel so eloquently put it on Twitter:

I feel it is my duty to point out a technical inaccuracy in Ariel’s tweet. Franklin actually had an entire side of the table to himself. It was Linus and Marcie—both Caucasians, mind you, not that it matters—who were quarantined on separate ends of the table.

Former rapper Willie D of the Geto Boys, who once recorded a song called “Fuck Rodney King” because he didn’t think the 1992 LA riots went far enough, addressed the Franklin Armstrong racism controversy on his YouTube channel. You can see the pain and heartache in Willie’s barely awake eyes as he realizes that his beloved Peanuts comic strip was also tainted with the bigotry and racism that has prevented him from becoming a nuclear physicist his entire life. (An added treat is hearing Willie pronounce the cartoonist’s name as “Sharles Schulz.”)

Sadly for some but happily for others, I’m here to inform you that the Franklin Armstrong story is one of racial healing and redemption rather than the same old rancid KKK/Nazi propaganda that the cartoon industry routinely serves us as if there’s nothing wrong with it.

The year was 1968 and cartoons were still largely segregated. Charlie Brown and Snoopy were two of the most famous fictional personages in the world.

And then a man named Martin Luther King was shot dead in cold blood.

That sucked, of course, but the story gets better from there.

A retired Los Angeles schoolteacher named Harriet Glickman—not profiling here, just giving you her name—felt it incumbent upon herself to write a letter to Charles M. Schulz urging him to introduce a young Negro boy to the stable of Peanuts characters:

Since the death of Martin Luther King, I’ve been asking myself what I can do to help change those conditions in our society which led to the assassination and which contribute to the vast sea of misunderstanding, fear, hate and violence.…[T]he introduction of Negro children into the group of Schulz characters could happen with the minimum of impact….[I] hope that the result will be more than one black child….Let them be as adorable as the others…but please…allow them a Lucy!

Schulz wrote back saying he liked the idea but wanted to introduce new Negro characters in a way that it didn’t appear that he was “patronizing our Negro friends.”

The artist said he initially met some resistance from newspaper editors in the south who objected to the idea of Franklin attending school with white children. He also claims that his editor told him to ditch the whole Franklin project but relented when Schulz, in the name of racial justice for African American cartoon characters, threatened to quit.

By the summer of 1968, Charlie Brown met a new friend—a dark-skinned and dusky boy named Franklin—who helped him find his lost beach ball as they cavorted together in the sand.

Upon hearing of a new black Peanuts character, a certain Bishop James P. Shannon, who had marched with MLK in Selma, was quoted wondering whether it would be “a believable human being who has some evident personal failing” or “a perfect little black man.”

It would be the latter. Schulz took great pains not to give Franklin any wisp of a personality and especially none of the character flaws displayed by that evil witch Lucy or that disgusting slob Pigpen. Franklin Armstrong would become the most placid and agreeable Negro boy in the comic-book world. When the Peanuts crew needed a rapper, Franklin was their boy—sorry, their young man.

Fifty years later, Harriet Glickman’s bold suggestion has resulted in a world that has flipped so far to the other side of racial sensitivity that minor crises emerge at the sight of a black boy with plenty of room at the table and more desserts than he can possibly eat—a luxury unheard of in, say, oh, Africa.

Franklin Armstrong has helped create a world where black people are not only welcome at the table, their unsuspecting hosts may mistakenly view them as far more agreeable and far less potentially violent than they may be outside of the cartoon realm.