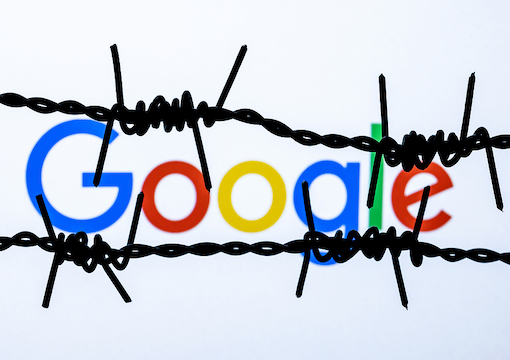 Censorship veers between the sinister and the farcical. Perhaps it reached its apogee of farce in the trial of Penguin Books in England in 1960, which had published Lady Chatterley’s Lover in 1959 and was tried the following year under the Obscene Publications Act. The prosecuting counsel, Mervyn Griffith-Jones, opened the prosecution case with a speech that added greatly to the gaiety of the nation and virtually assured the defeat of the prosecution:

Would you approve of your young sons, young daughters—because girls can read as well as boys—reading this book? Is it a book you would have lying around your own house? Is it a book that you would even wish your wife or your servants to read? It is a sad fate for a man to be remembered almost exclusively for a bêtise uttered in a blaze of publicity.

“Many providers of services—shopkeepers, for example—are not permitted to discriminate as Google is free to do.”

This is not to say that the evidence given by literary witnesses in defense of Penguin Books was above reproach. They grossly, and I suspect knowingly, overpraised the book (in truth a very bad one from more than one point of view) because they so much wanted an end to the kind of censorship made possible by the Obscene Publications Act. For them, the end justified the means. Be that as it may, the trial successfully exposed the absurdity of such censorship in modern conditions.

A friend of mine, a bookseller whose business is entirely online, recently informed me of a form of censorship by Google that has both farcical and sinister elements. The bookseller in question is not someone who courts controversy or the limelight; if anything, he tends the opposite way. One would have thought that his business was an entirely uncontroversial one.

Algorithms, however, are unforgiving, as well as frequently stupid. He received a message saying that certain of the items he had up for sale could no longer be listed on Google platforms as they were deemed to have offensive or inappropriate content.

Offensive to whom or inappropriate to what? To read Google’s explanations puts one in mind of Byron’s famous lines on Coleridge, who, according to Byron, had taken to:

Explaining metaphysics to the nation.
I wish he would explain his explanation.

In its message to the bookseller, Google said that “Our goal is to provide the best user experience on Google.” As is so often the way with impersonal messages emanating from giant and dictatorial bureaucracies, the words used have connotation but no denotation, that is to say no meaning can actually be pinned on them, though they have a penumbra of emotional blackmail: Those who criticize or otherwise annoy us are ill persons, being opposed by definition to the “best user experience.”

The message continues, “To ensure that the ads we show to online shoppers are safe…we maintain comprehensive enforcement of the Shopping ads policies for all merchants.” What are safe advertisements, exactly? Indeed, how can an advertisement be safe? It can be untruthful or outright mendacious, though whether Google would be the best judge of that might be disputed; or it could be for dangerous products, which is surely not the same as saying that an advertisement for them is itself unsafe. Imprecision of language means either imprecision of thought, or that the employer of such language has something to hide. In either case, for a corporation as powerful as Google, this is not reassuring.

Safe is a weasel word of which Google appears to be very fond. It reiterates that it wants “everyone to have a safe and positive experience when visiting Google and its partner sites,” before warning merchants who don’t follow its policies that “we might disapprove their items” and that “when they continue to break the rules egregiously, then we may have to suspend those accounts.” Note that the decision to suspend an account is forced on Google, it is not a matter of choice on its part.

Google informs the merchants who use it that “We use automated systems to identify items that violate our policies…. We cannot disclose specific terms or details that lead to the item disapproval.” The word “cannot” is here a straightforward lie; what is meant by Google here is that it will not.

An appeal process exists, but it is utterly opaque to the person who appeals, and therefore entirely arbitrary. Of course, since Google is providing a service to the public, it can set what conditions it likes, provided they are not in violation of the law; but though all animals are equal, some animals are more equal than others, and many providers of services—shopkeepers, for example—are not permitted to discriminate as Google is free to do.

I come now to some of the reasons the bookseller’s items were “disapproved” (“dis-approved” would perhaps be a better way of putting it) by Google. Here we are entering a world that is half Kafka and half W.S. Gilbert. For example, An Act to Appoint Additional Commissioners for Granting Aid by Land Tax for Continuing Duties on Personal Estates, an act of the British Parliament in 1833, was disapproved by Google because it supposedly violated its policy on advertisement of health and beauty products and restricted pharmaceuticals.

Or again, Witchcraft in the South Sea Islands by Arthur Grimble, published in 1926, was disapproved because of “offensive or inappropriate content.” There are two possible explanations as to why this item should be regarded as offensive: First, it has a photograph of women in the Gilbert Islands naked from the waist in their dancing costume, in what used to be called grass skirts, and second, that Grimble was a colonial officer, though also a serious anthropologist who studied traditional Gilbertese culture more thoroughly than anybody else before or since.

With regard to the first objection, it cannot be argued that Gilbertese women did not dance in the costume photographed, because they did, at least before the missionaries forbade them to do so. Google’s apparent objection to the item, an objection worthy of Mrs. Grundy, puts me in mind of Mrs. Davidson, the wife Davidson, Baptist missionary to the Gilbert Islands in Somerset Maugham’s short story “Rain.” She says of the native dancing:

It’s not only immoral in itself, but it distinctly leads to immorality. However, I’m thankful to God that we stamped it out, and I don’t think I’m wrong in saying that no one has danced in our district for eight years.

Clearly, Google is at one with the Davidsons on the matter of native dancing.

The second possible objection to the item—that it was written by a colonial officer—is in effect to expunge vast swathes of past writing from sale, at least on Google platforms, presumably in the hope that they will eventually be expunged from the human record forever. It goes without saying that Google algorithms care much more for the welfare of the Gilbertese than ever did Grimble, who spent 14 years of his life in the islands and wrote a book about his experiences that sold a million copies.

These examples are no doubt more farcical than sinister, but they point to the shape of things to come, if those things have not already come.