In the Euston Road 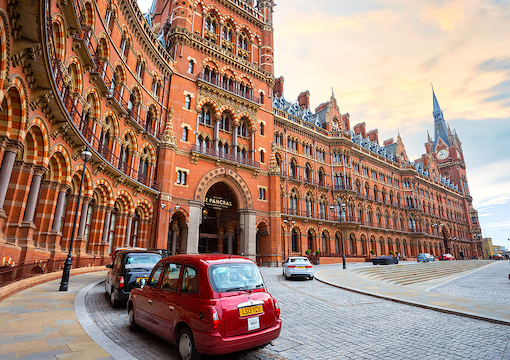 Traveling between England and France recently was a profoundly depressing experience.

First I had to get to Euston Station and then walk the few hundred yards to St. Pancras Station. The Euston Road, which runs between them, is not a beautiful thoroughfare at the best of times, and this was certainly not the best of times. I never thought, however, that I would miss the suffocating traffic that normally clogs and chokes it, but this unpleasing phenomenon had been replaced by another, namely a dispiriting emptiness except for numbers of homeless people wandering intoxicated in the road or camping in urine-soaked sleeping bags propped up against walls, surrounded by the detritus of their appalling lives—bottles, packaging of junk food, needles, flattened cardboard cartons.

As a liberal who is only too aware of his own good fortune, I was slightly ashamed of the visceral disgust that they aroused in me. My wife said that these people had the appearance of true degenerates: malnourished, dirty, with rotten teeth and feral expressions. When they spoke—often shouting at each other from great distances—their language was only barely recognizable as English, indeed as language at all, though they were English and almost certainly spoke no other language.

Had they always been there in the Euston Road in such numbers, and had I failed to notice their presence because, before the great confinement of the rest of the population, it had been diluted by that of thousands of normal people passing by? Or had they emerged from somewhere underground, like the Morlocks in H.G. Wells’ story The Time Machine? To reach such a state of degradation, however, was not the work of a moment; rather, it was that of a lifetime. They must have been somewhere.

Nothing would have been easier than to dismiss them from my mind as degenerates, such as there have always been and probably will always be. But each of them must have had an individual history, most likely a tragic one, or at any rate not one of great privilege. Their every decision would almost certainly have been the worst possible, taken without forethought and always in pursuit of the gratification of the moment. Surely they should be swept up and forced to live better? But how, by whom, and by what right?

“To reach such a state of degradation was not the work of a moment; rather, it was that of a lifetime.”

One thing that I have noticed about such people in England (though not in France) is that they are almost all white. If such degradation were the result of poverty alone, as if by a kind of mechanical operation, there ought to have been among them a disproportion of people from those ethnic minorities that (we are informed almost ad nauseam) are economically downtrodden and discriminated against. But there were none; hence I concluded that the degradation that I saw was not purely economic in origin, but had some kind of cultural source. I have encountered many alcoholic Sikhs, for example, who were among the most refractory with regard to abstinence of all my patients; I have encountered almost every kind of social pathology among Muslims, from incest to drug addiction—but I have never seen any Sikh or Muslim living the kind of life that I witnessed on the Euston Road.

In my childhood there were still tramps, or gentlemen of the road, as they were sometimes called. They were not well-dressed, of course, and they were dirty—often they smelled. But they were not degenerates; they were genuine eccentrics who preferred a life of freedom if discomfort to one of comfort but constraint. They wandered from place to place, from farm to farm and town to town, obtaining whatever charity or casual employment they might. No doubt they were destined to disappear in any case, but the increase in traffic, the transformation of roads into highways, the industrialization of the countryside, made their way of life impossible. I remember them not with disgust but with admiration, no doubt tinged with that rose color that distance in time is inclined to lend.

I suspect that the homeless whom I saw in the Euston Road by contrast were, in the last analysis, the victims of the lumpen-hedonistic sex–drugs–and–rock ’n’ roll culture that, in Britain at least, devastated the white lower orders of society in the middle of the 20th century, and to whose baleful consequences those with few economic resources or educational attainments were most vulnerable, all the more so in times of economic dislocation, having been left with nothing to fall back on.

Once arrived in Paris (where there are also scenes of degradation, but differently peopled), we were at once pursued by a taxi tout outside the station who was as irritating as a horsefly. Again, I tried to imagine what it must be like to earn a living in this way; with difficulty, I maintained a politeness that by no means came naturally, rather than attempting merely to swat him.

He took us for idiots, this tout, as if we could not see for ourselves that there was a line of taxis a mile long waiting for a fare. We took the first in the line, and the driver told us a tale of woe, perhaps exaggerated but no doubt true in essence.

He had been waiting six hours for a fare, he said; such trains as arrived had very few passengers, none of whom wanted a taxi. He was a salaried drive; that is to say, he was paid about $700 a month and a proportion of any of the fares that he earned. In normal times, he just about got by; since the confinement he had earned almost nothing, and he was precisely the kind of person who was not eligible for government assistance. He would be better off formally unemployed.

Change jobs, do something else, some people might say; but he was in his 50s, and though he was intelligent, I doubt that he was trained for anything else. But he was a Muslim, and at least among Muslims there is a social solidarity that does not pass through the state (whatever else its horrors and disadvantages).

The streets were dark; all the shops other than the groceries and pharmacies were shuttered with aluminum shutters, every inch of which was covered with hideous tagging. Is our future in the West to be an endless cycle of confinement and isolation punctuated by brief and febrile periods of release?