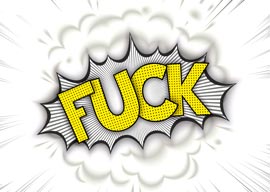 On 30 December, 2015, the French newspaper LibÃ©ration had a huge word dominating its front page: Fuck!

The expletive was used to commemorate, lament, or celebrate the death at the age of 70 of a rock star called Lemmy Kilmister. The accompanying picture shows a middle-aged rebellious adolescent; inside there is a picture of him in old age, a kind of senile rebel who could never bear to leave his adolescence behind, proud of his degeneracy unto death. In this, he was an authentic representative of modern psychological development: a short period of precocity followed by a long one of arrested development.

The word fuck is not only a word, of course, but a philosophy, or at least an attitude to life. It used to be said that if you tied an Italian’s hands he could no longer speak; it might now be said that if you prohibited the use of the word fuck you would reduce half of British youth to silence, an eventuality that would increase marginally the average cultural level of the world’s population.

In the prison in which I worked until my retirement, I used not to allow the prisoners to employ the word”not that I had any means to prevent them from doing so other than suasion.

“The word fuck is not only a word, of course, but a philosophy, or at least an attitude to life.”

“Hang on a moment,” I would say. “Can you tell me what the difference is between a headache and a fucking headache?”

As it happens, there is a condition known as coital cephalgia, a headache that comes on during sexual intercourse, but that is not what he meant.

The more intellectually curious would then ask why he should desist.

“Well,” I would reply, “you wouldn”t expect me to say to you, “Here are some fucking pills, now fuck off and take two of the fuckers every four fucking hours and if they don”t fucking work, come the fuck back and I”ll give you some other fuckers,” would you? If I don”t use that language to you, why should you use it to me, we being equals?”

Having established beyond reasonable doubt that I knew the usage of the word, its cognates and declensions, thereby having also proved my normality and full membership of the human race, my interlocutor would never again use the word in conversing with me, demonstrating that it had not been an uncontrollable verbal tic, but a matter of choice and elective affinity.

(My brother once worked on a road-building site. An Irish foreman, looking at a machine that had just broken down, said, “Ah, the focking focker’s focking focked!” which for some reason that I cannot fully explain was not vulgar or offensive at all, but funny and expressive. The ways of language are, or should be, subtle.)

But what exactly is the philosophy of Fuck!? The article about Lemmy Kilmister gave a small clue. For example, it quotes the late lamented as saying, “I founded the filthiest rock group in the world.” There is in these words an undoubted tone of self-congratulation: He had done something not just filthy, but superlatively filthy, and therefore, according to his own inverted, or satanic, scale of values, outstandingly meritorious. He went on to say, “If one day we come to live near you, that will be the end of your lawn.” In other words, ugliness will be my beauty, and furthermore I will impose it on you.

The egotism of this hardly needs emphasis. Being interviewed in a place where it was forbidden to smoke, he said, “I”ll need another reason not to smoke than that it’s forbidden [here].” In other words, he was the sole authority as to when, where, and whether to smoke. Others counted for nothing.