In Defense of Bronies 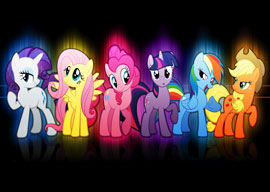 Ridiculing “Bronies””those fanboys who are obsessed with the TV show My Little Pony”is a forgivable offense. Sure, these are seemingly heterosexual males who worship a cartoon for little girls. That’s the dictionary definition of a pussy. Howard Stern called them “the end of civilization.” PJTV agreed and said this was all prophesied in the Book of Revelation. Jerry Springer has sent out a request to have them as guests, and my pals at Red Eye said, “There are worse hobbies for a boy to have…terrorism.” I laughed out loud when I heard that.

Bullying is a natural reaction. You’d have to be mentally ill to see Bronies as anything other than loser weirdo fag loser nerd perverts. However, after watching My Little Pony, talking to their fans, and checking out the documentary Bronies, the truth hit me like an atomic wedgie. This isn’t about wimps such as Pajama Boy or those disgusting perverted Furries. It’s about autistic men trying to overcome their largest impairment: social interaction. Once you figure that out, making fun of them becomes equivalent to going up to a cancer patient on the dance floor, ripping off her wig, and yelling, “HA HA YOU’RE BALD!”

“We need socially inept nerds. They are the weirdoes behind all our best inventions.”

I dug into the shows with a deep-seated fear that I might like them. (I’ve never tried rollerblading due to the same fear.) After watching half a dozen episodes I was relieved to discover that My Little Pony was nothing more than a pretty good cartoon for little girls. It’s just like Rainbow Brite or Powerpuff Girls, but with one central difference: The show is also an instructional video about social interaction. The central message is that “Friendship is Magic,” and they keep hammering it home like they’re talking to little girls and autistic men. The stories repeatedly break down the harmony of friendship into six core elements: Honesty, kindness, laughter, generosity, loyalty, and magic. As a grown man with a normal brain, the repetition quickly gets tiresome, but if I had Asperger’s, I would probably be sitting in front of the screen in a Brony T-shirt saying, “One more time.” It’s all the things autistics don’t understand about life, broadcast in bright colors in a very simple way that works out every time. Studies have shown that when someone “on the spectrum” looks at you, they don’t meet your eyes and their gaze wanders all over the body the way we do when we’re looking at a mannequin. The eyes of the My Little Pony characters take up their entire heads. You can’t not look at them.

Most assume this is yet another cutesy toy perversion, but they don’t talk about sex on Brony message boards. It’s more like fantasy football where they create elaborate backstories about made-up characters. These aren’t depraved pervs watching a stupid girl’s show and faggin” off with their dicks out. These are severely autistic fixer-uppers trying to repair their own leaky roofs. Autism or Asperger’s or OCD or whatever you call it is way over my head. These syndromes all seem to have incredibly complex definitions that manifest themselves in varying degrees, but you all know who I’m talking about: those geeks who organize their newly sharpened pencils in a perfect line. They’re the not-quite-right straight-A students who talk like 17th-century aristocrats and get all weird about food. They can tell you about trains for hours on end, but the thought of asking someone for directions to the station gives them a panic attack. At the worst end of the spectrum, they are sociopaths with no compassion. The rest are noble misfits struggling to overcome handicaps and practice social interaction like Data from their other favorite show Star Trek. Data doesn’t understand humor or love, and it drives him nuts. (There is a lot of crossover between Trekkies and Bronies, and John de Lancie plays a bad guy in both shows). Many autistic kids give up and retreat to their bedrooms where they can obsessively pursue their hobbies, but others want to go the Data route and keep trying. How about we don’t punish those guys? Isn’t that what we hate about mass immigration”the reluctance to assimilate?