In Defense of Libertarian Brutalism 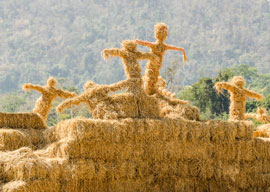 “[L]ibertarians can generally be divided into two camps: humanitarians and brutalists.”

That’s Jeffrey A. Tucker’s provocative proposition in a widely discussed new article in The Freeman.

Humanitarian libertarians value the principle of liberty, Tucker writes, because”among other things”it permits freedom of association and promotes the primacy of the individual over the state.

However, he also claims that liberty “keeps violence at bay” and “protects human rights of all against invasion.” Neither proposition is self-evident to me, but Tucker boldly declares, “We know all this from history and experience.”

Tucker then contrasts these “humanitarian” beliefs with those of “brutalists.”

Brutalists also treasure liberty, but for the wrong reasons, and find those listed above “boring”:

To them, what’s impressive about liberty is that it allows people to assert their individual preferences, to form homogeneous tribes, to work out their biases in action, to ostracize people based on “politically incorrect” standards, to hate to their heart’s content so long as no violence is used as a means, to shout down people based on their demographics or political opinions, to be openly racist and sexist, to exclude and isolate and be generally malcontented with modernity, and to reject civil standards of values and etiquette in favor of antisocial norms.

Yet I don’t detect much difference between some of these examples of “good” liberty (freedom of association) and “bad” liberty (the formation of homogeneous tribes). Tucker, however, insists that these “two impulses””the humanitarian and the brutalist”are “radically different.”

I reject other premises of Tucker’s as well, primarily the importance (or even existence) of “racism” and “sexism,” at least as defined and (supposedly) experienced by Western progressives.

As Jim Goad has ably demonstrated, “hate-crime” homicides are only slightly more real than Bigfoot: Twice as many blacks kill each other every year than blacks were lynched by whites in America between 1882 and 1968.

…[W]e need sometimes to face difficult truth, and we need to be shocked and sometimes to shock with seemingly implausible or uncomfortable implications of an idea. Brutalism goes much further: the idea that the argument should stop there and go no further, and to elaborate, qualify, adorn, nuance, admit uncertainty, or broaden beyond gritty assertion amounts to a sell out or a corruption of purity.

Who does that, though? Occasionally an artist”or even an Average Joe desperate to extricate himself from a heated debate”shocks for shock’s sake, then won’t graciously accept criticism or admit defeat. But is such desperate petulance really an epidemic social problem, or is it”like Tucker’s “racism” and “sexism””another Loch Ness Monster of the mind?