In Defense of Neanderthals 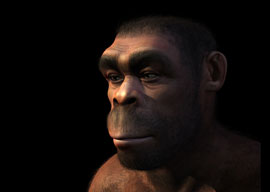 The most stubbornly hypocritical glitch in the egalitarian mindset is that eugenics is roundly and vigorously dismissed as a dangerous and discredited pseudoscience…unless it can be wielded to portray ideological enemies as genetically inferior throwbacks.

Thus, the same sheltered, daydreaming buttercups that strain to deny even basic visual differences between ethnic groups are the first to blame rural white poverty on things such as inbreeding and overall crappy genes. In such cases, eugenics are not only suddenly real, they are highly pertinent”decisive, even.

The same double standard permits politicians”who’d never dare publicly suggest that sub-Saharan Africa is not exactly the Hope Diamond of intellectual achievement”to smear large swaths of people who don’t kowtow to their dim notions of “progress” as “Neanderthals.”

Vice President Joseph Biden, that asshole, recently referred to Republicans as “Neanderthals.” A couple of years ago, current Secretary of State John Kerry, who resembles an archeological dig even while alive, dismissed global-warming critics as “Neanderthals.” In 2003, now-dead Senator Ted Kennedy said he would resist the appointment of any “Neanderthal” that George W. Bush might nominate as a judge. The Daily Kos, that festering armpit of self-congratulatory leftist delusion, recently suggested that NRA members possessed the “Neanderthal gene.”

The pejorative “Neanderthal,” despite being anthropologically hurtful and unabashedly homo sapiens-supremacist, is thrown around with gleeful impunity by the selfsame egalitards who insist that everyone is created equal…except, of course, for the knuckle-dragging prehistoric losers who don’t think like they do.

If I know one thing about people, it’s that they need to feel superior to other people, and since it’s no longer culturally permissible to suggest that sub-Saharan Africa may be a teeny bit backward, one is free to indulge their innate craving to feel superior at the expense of the stocky, hairy, big-browed, club-wielding descendants of homo neanderthalensis whose genetic vestiges now listen to heavy metal, attend NASCAR races, own hunting rifles, pray to Jesus, handle serpents, and vote Republican.

Hell, it’s possible that the word “Neanderthal””or at least a grunted prehistoric synonym for it”was the original racial slur.

In its pejorative usage amid the modern Anglosphere, “Neanderthal” is exclusively used to demean whites. In fairness, pale skin, blue eyes, and red hair were all Neanderthal traits. But although being Neanderthal is a white thing, it is not exclusively so. A landmark 2010 study suggested that not only did ancient Neanderthals breed with modern humans, all modern groups except for sub-Saharan Africans possess a small percentage of Neanderthal DNA.

So genetically, humans can somewhat tidily be divided into two groups: those who have Neanderthal DNA…and black people. If a black person’s DNA test reveals any Neanderthal ancestry, you can assume they have some cream in their coffee.

But Ted Kennedy? John Kerry? Joe Biden, that asshole? Neanderthals, every last one of them. And self-hating Neanderthals at that. The worst kind.

The percentage of Neanderthal DNA among the world’s six billion or so nonblacks usually ranges from 1-4%; a recent DNA test suggested that my own quotient is 3%, meaning I’m slightly more Neanderthal than the average European and WAAYYYYYY more Neanderthal than Mike Tyson, MC Hammer, and Kim Fields, that nice black girl who played Tootie on The Facts of Life.

When the 2010 DNA study was published, white-hating hominids gleefully announced that only “African peoples are 100 percent human,” that Europeans’ lingering Neanderthal DNA formed “the prehistoric sources of the white race’s aggression, racism and sexism,” that “white people are descended from unwashed hairy beasts not our African brethren,” and that “Africans are true homo sapiens, while the rest are watered down Neanderthal inbreds.”

That’s all very cute, except for the fact that the places where people are “100 percent human” tend to fall far behind the cavemen’s ancestral homelands when it comes to trifles such as longevity, technology, written languages, and living standards.