In Defense of Stoning 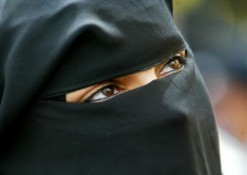 The first and biggest mistake Americans make when analyzing the Middle East is assuming they are us. When France gave us the Statue of Liberty, we stopped making fun of them for a long time. When MacArthur saved Korea, a nation of Orientals began worshipping Jesus Christ. When the Ramones played London, all of Britain devoted the next two decades of punk to that one show.

However, Islam isn”t looking for a tip of the hat or a small loan. Building a mosque at Ground Zero will not quash their beef. Nor will putting a Hussein and an Obama in the White House. They”re not even impressed with a Muslim Miss America. They don’t think like us. If Saskatchewan was run by mullahs, I”m sure they would love us to truck over there and help them discover the joys of a secular democracy but that’s because we have the same values. Islam doesn”t want our Democracy any more than they want our MTV. Forget sociobiology and remember we need to accept the Middle Eastern Muslim is an entirely different animal.

In no place is this difference more vast than the sticky situation of a woman’s head space. When Westerners hear of burqas, and see honor killings and stonings, they only speak of women banished to a life of hot polyester, irrational rage, and painful executions. That’s because we put our minds in their bodies. We might as well say fish don”t like being eaten or parrots don”t like being caged. Not only does Islam enjoy their un-American traditions, they need them.

The burqa may be a stifling and phenomenally uncomfortable way to hide a woman but it is because her chastity is so valuable, she is forced to go to these great lengths. Give a basset hound a bona fide dinosaur bone and he’s not going to leave it by the garage. He’s going to carefully bury it in the secretest spot in the yard. The women of Islam are a fantastically beautiful and mysterious force we could never understand. They”re not some gum-chewing piece of NASCAR trash who will exchange sexual favors for a carton of cigarettes. They are more like angels among us. I have seen very few burqa wearers without their burqas but I imagine their outsides to be like Padma Lakshmi and their insides to be like Christiane Amanpour. If we were dealing with that level of babe, hiding her from horny eyes would be a no-brainer.

“Islam is not Christianity and the Middle East is not the West. They have many hurdles to overcome before they can enjoy the fruits of their labor and it is wrong of us to try to catapult them forward into our way of life.”

Honor killings are another place the Western mind has no place. It shocks the American ear to hear that a young Muslim in London has had butyric acid poured in her face for not marrying a Muslim but please understand this woman is the errant thread that threatens to unravel the whole sweater. As soon as one of these living goddesses deigns to marry some fat, white, scouser, the gene pool has begun dilution and once the children of Islam cease to carry the torch, it can”t help but burn out. It may seem extreme to us to disfigure, maim, and even assassinate one’s sibling or daughter but that’s easy to say when our culture is in tact and on its own soil. Muslims abroad are sitting ducks and without some tough love, nipping assimilation in the bud, Islam has no chance to spread. Besides, having half your face burnt off isn”t as bad when it’s covered with black polyester all day. Think about it.

Which brings me to the one concept us Ugly Americans are least likely to grasp: Stoning. There was a movie recently, I believe it was called The Stoning of Sotomayor. In it, an innocent woman is stoned to death because her husband wants a divorce and the culture won”t allow it. I”m sure this does happen and it is tragic, to be sure, but what about the cases where they got the right person? It may sound harsh, but a lot of the women who get stoned are sluts. You think it’s bad when some piece of white garbage plays head games with her man by telling a stupid lie about where she parked the trailer but you need to multiply that by 10,000 to get to the kind of ethereal power a Muslim women’s cunty brain contains. Even if she doesn”t actually cheat on her man she can play “eye games” through her burqa that are not unlike brain rape. You know how blind people can hear a pin drop several miles away? Women who have been raised only showing their eyes have the power to funnel hundreds of gallons of mind games into the middle of a blink. When these bitches get up to their cerebral man-manipulation it’s like being put in a human car wash. There are casualties of war, yes, but the West needs to pay heed to the thousands of actual whores who get bricked.

“Are you out of your mind?” asks the Western Chauvinist. “You are defending the most barbaric culture in the world and you”re trying to make it sound like it’s some kind of efficient cleansing technique. Outside of the Nazis (whom we still vilify with the wrath of Khan) we would NEVER do something like that.” Oh really? I ask with one eyebrow cocked. What about burning witches at the stake? England burned as many as 100,000 witches. Here in America we didn”t burn any but we hanged and drowned several dozen. Ivory Tower academics scoff at this ritual as “primitive” and focus their myopic vision on the few that weren”t actually witches “ but what about the ones that were? These were heretical sorcerers who practiced the exact kind of magic many Muslim women practice today. They tortured an entire civilization with their curses and potions and guess what; we ended the whole thing. There has not been one case of black magic reported in America or England for hundreds of years. Not only did we kill every wicked witch in the West, we also prevented them from having offspring who would have had more offspring and so on and so on. My heart goes out to the innocent women (probably sluts) who were only practicing white magic but it’s worth at least glancing at the stats before knocking witch hunts as a complete waste of time. To see what life would be like without this ancient discipline we need look no farther than Northern Europe. Norway’s witch-hunts lagged way behind England and America and where are they today? Well, their Death Metal scene is thriving and a guy called Hellhammer recently wore a guy called Dead’s skull fragments as a necklace. Dead sang for a band called Mayhem and shortly after his suicide, their guitarist murdered their bass player. Nice. If this is what you get when you let bitches be witches, I don’t want anyone, Arab or Christian, to have any part of it. It’s worth noting not one of the articles regarding this Satanic madness has ever discussed what would have happened if all Mayhem’s grandmothers had been burned alive. Possibly because, as Jack Nicholson once said, “They can”t handle it.”

Chanting impossible mantras like “One Love, one heart,” makes for some jammin” reggae lyrics but in reality, it is bigger than the Biggest Lie. Islam is not Christianity and the Middle East is not the West. They have many hurdles to overcome before they can enjoy the fruits of their labor and it is wrong of us to try to catapult them forward into our way of life. The time is not to judge but to be patient and wait. We murdered thousands of women and avoided almost infinite darkness in the process. To deny Islam the same privilege is, well, it’s evil.