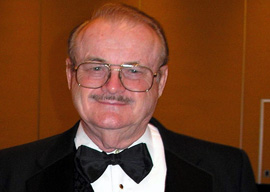 My friend Jerry Pournelle has died at age 84.

Jerry was the embodiment of a famous quote by his mentor in the science-fiction business, Robert A. Heinlein:

I didn’t meet Jerry until 1999, but I’d known his son Alex in high school. The Pournelle family asked me to go with them to Kansas City in August 1976 to the science-fiction convention at which Heinlein, the central American sci-fi writer of the 20th century, received his lifetime achievement award. (But I had to be at college that week.)

But Jerry, one of the great Southern California Cold Warriors, had a remarkable number of careers, starting as a teenage artillery officer during the Korean War, which deafened him in one ear. (At the lunch table, he’d choose his seat carefully to position his one remaining good ear next to his guest.)

He once recalled a question from the Army Officer Candidate School test:

Q. You are in charge of a detail of 11 men and a sergeant. There is a 25-foot flagpole lying on the sandy, brush-covered ground. You are to erect the pole. What is your first order?

The right answer is:

A. “Sergeant, erect that flagpole.”

In other words, if the sergeant knows how to do it, then there’s no need for you to risk your dignity as an officer and a gentleman by issuing some potentially ludicrous order about how to erect the flagpole. And if the sergeant doesn’t know either, well, he’ll probably order a corporal to do it, and so forth down the chain of command. But by the time the problem comes back up to you, it will be well established that nobody else has any more idea than you do.

“Did Pournelle and his friends help inspire the 1983 Strategic Defense Initiative?”

The actual Korean War, however, proved less amusing. The triumphant U.S. Army had pushed close to North Korea’s border with China when suddenly a million battle-hardened “volunteers” from Mao’s People’s Liberation Army poured into the peninsula. Jerry’s unit was chased hundreds of miles south, not finding security until they’d finally reached the coastal zone in which the U.S. battleships’ 16-inch guns could protect them. For the first time in weeks, a million Red Chinese weren’t actively trying to kill him.

Jerry once told me that if in early 1951 General MacArthur had said, “Boys, it’s time to clear out the nest of traitors in the White House. Who is going with me?” he would have been on the first flight to Washington with his hero.

After Korea, Pournelle went to West Point for a while, was a Communist briefly, and earned numerous advanced degrees in a variety of hard and soft subjects. He became an aerospace engineer at Boeing and several other companies and spent 1964 writing a Dr. Strangelove-style study for the Air Force on how a nuclear war would be fought in 1975.

He pored over satellite photos of the Soviet Union, counting the ratio of trucks to horse-drawn carts, eventually concluding that rather than the wave of the economic future, the U.S.S.R. represented “Bulgaria with nuclear missiles.” With his mentor, Viennese spymaster Stefan Possony of the Hoover Institution, Jerry wrote The Strategy of Technology, arguing that the way to win the Cold War was to turn it into a high-tech competition over who could innovate faster.

One of the more curious stories Jerry told about his adventures with Possony involved a plot to liberate Albania from the Iron Curtain. We were eating lunch in a Ventura Boulevard restaurant when an extraordinarily tall man walked by. Jerry remarked that the only seven-footer he’d ever known was His Majesty Leka, who, as the son and heir of King Zog I, was rightful king of the Albanians.

The Communist dictator of Albania, Enver Hoxha, had broken with Tito’s Yugoslavia in the late 1940s and then with the Soviet Union in 1961 for Moscow being insufficiently Marxist-Leninist. Since Tirana now had no allies closer than Peking, Possony and Pournelle got to wondering what it would mean in the larger Cold War if Europe’s most friendless regime were flipped. Jerry briefly blogged in 1999:

…Possony and I were consulting on problems associated with an attempt to cast out the Communist hermit regime in Albania; my part had to do with using some Arab air resources (Albania is mostly a Moslem nation and Laika had a close relationship with the Saudi and Hashemite dynasties). This was just before the 6-day War made use of Jordanian air force elements moot…

It would have been a very interesting thing, to recover a Communist nation for the West in 1968/69. Of course nothing came of any of it.

Beats me. It sounds rather like the plot to Dirty Rotten Scoundrels, in which Michael Caine pretends to be a deposed prince to raise money from rich women to liberate his kingdom from the Communists. Later, in an episode of Tracey Ullman’s HBO series, Alfred Molina superbly played a Van Nuys used-car dealer whom the other salesman derisively call “the King” because they don’t believe he’s the king of Albania. (But he is.)

As in Hollywood, during the Cold War a lot more was said than done. But a lot was also done. The immense scale of Cold War undertakings remains perpetually surprising to me, even though I grew up near Lockheed in Burbank. For example, in 2006 the U.S. government finally declassified its 1949–53 project with Britain to overthrow the Hoxha regime. The scheme had been catastrophically betrayed to Moscow by Kim Philby.

Yet modern people seem to be losing interest in the vast subject of the Cold War. Without clear-cut ethnic divisions into good guys and bad guys, as in World War II, 21st-century Americans are finding the notion of a vast struggle over ideas complex and tedious.

Besides being an engineer and a college professor, Jerry ran political campaigns. When I was a seventh grader, I used to write lengthy letters haranguing my new congressman, Barry Goldwater Jr., and getting dutiful replies in return. I only learned recently that the poor scion of the 1964 Republican nominee had never much wanted to go into politics. Goldwater Jr. had been perfectly happy as a stockbroker dating Warner Brothers starlets until Jerry had enlisted his famous name to run for the House.

Jerry’s breakthrough into science fiction came when he teamed up with an established author, Larry Niven (Ringworld), to write the 1974 hard sci-fi novel The Mote in God’s Eye, an immigration-policy allegory of astounding intellectual depth.

Heinlein offered a 17-page critique of Niven and Pournelle’s rough draft, telling them to lose the first 100 pages and change the title from Motelight to something biblical. (Heinlein’s Abrahamic Stranger in a Strange Land might be the best title ever.)

A half-dozen centuries in the future, humanity has stumbled into a fortuitous discovery of a faster-than-light interstellar travel technology and is spreading out across the habitable planets of the galaxy, never encountering any other intelligent life.

Then a slower-than-light spacecraft driven by a light sail arrives from an unexplored solar system.

Our Space Navy goes to visit the planet that sent it and discovers a civilization that seems as advanced as ours, except they don’t have our faster-than-light travel technology. So they are stuck in their own solar system, except for sending out the occasional ruinously expensive probe.

We can visit them, but they can’t visit us. Unless we let them. (Now that I think about it, the San Fernando Valley in 1974 was suddenly filling up with wealthy Iranians who were skimming the Shah’s oil revenues, the first of an endless series of immigrants craftier than the natives.)

The aliens’ extremely gracious ambassadors greet humanity’s representatives in a most affable manner.

The book then turns into an ecological detective story as a few deplorable earthlings try to unravel the complex reality of the Moties’ nature before diplomacy gets too far advanced to put the brakes on proposals such as sharing our faster-than-light drive with the beseeching aliens in the name of interstellar harmony and goodwill.

We wouldn’t want to be seen as speciesist, now, would we?

Niven and Pournelle later teamed up to write the most logistically magisterial of all the many Los Angeles Apocalypse stories, Lucifer’s Hammer, in which a comet slams into Earth. Writers from Nathanael West to Seth Rogen have been prophesying that L.A. would be ground zero for the end of the world, but nobody thought harder about how to survive Götterdämmerung than Larry and Jerry. (Niven, by the way, is the grandson of Edward Doheny, the California oilman fictionalized in Daniel Day-Lewis’ memorable portrayal in There Will Be Blood.)