In Praise of Hypocrisy 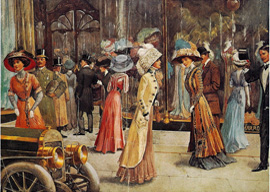 La Rochefoucauld was right. Hypocrisy is the tribute vice pays to virtue. More to the point, virtue deserves tribute. I tire of nincompoops raising a quivering finger at folks whose morality may not be 100% consistent. I grow weary of those who think the mere observation of hypocrisy means something. I yawn and roll my eyes at the killjoys who seem to think that the mere existence of hypocrisy somehow discredits the idea that one should at least attempt to act ethically.

The argument seems to be that if you reveal someone is a hypocrite in any way, no matter how tenuous, they’ll dissolve into an embarrassed puddle of goo like the Wicked Witch of the West when splashed with a bucket of water. What kind of reasoning is that? Looks to me like the kind of highfalutin disputation used by spoiled, foot-stomping, semi-sentient adolescents on their parents. It’s a textbook example of the ad hominem logical fallacy. Pointing out that someone is a hypocrite is analytically equivalent to calling them a pooty-head or mentioning they are fat and smell like paste. Except being a hypocrite is actually a good thing.

“Pointing out that someone is a hypocrite is analytically equivalent to calling them a pooty-head or mentioning they are fat and smell like paste.”

I admire hypocrisy: the more brazen, the better. It makes people strive toward something better than what they are. Hypocrisy is just faking it until you make it. The anti-hypocrites would prefer that everyone wallow in their vices rather than attempting to become better people. But virtue of any kind is impossible without some hypocrisy. Being against hypocrisy is moral nihilism.

The way the rhetorical game works for the hypocrite-hunters, you can be an extremely bad person as long as you’re consistent about it: sort of like Barney Frank. You’re not allowed to encourage people to be good or even vaguely sensible without being saintlike in your perfection. In fact, if you’re a big enough hypocrite, your opinions don’t count at all. Hypocrites are often considered nonpersons, much like racists, believers in sexual dimorphism, and other modern thought criminals.

A few years ago, media ding-dongs went into foaming paroxysms of ecstasy when it turned out that former American “Drug Czar” William Bennett likes to gamble. Or that like many rich people, Al Gore is a fat guy who, despite preaching the virtues of living small, owns large houses, a private jet, and boats with hot tubs in them. Or that Rush Limbaugh was addicted to drugs. Why is any of that interesting? Drugs are still bad and you should avoid them, lest you end up muttering to yourself like Charlie Sheen or a Berkeley City Council member. Gambling…so what? Bennett may be an annoying neocon gasbag, but he is right that people should have more virtues such as self-discipline. Apparently he had enough personal restraint that gambling was never a problem in his personal life. Sure, Al Gore has giant houses and a jet; that doesn’t mean folks shouldn’t be frugal and modest, even if the fat moron can’t manage a halfway decent hair-shirt routine to impress the rubes. Personally, I find Al Gore contemptible because the man can’t even cadge a handjob from a paid middle-aged masseuse, but I don’t mind that he has boats with hot tubs yet wants other liberals to eat gruel. The inventor of the Internet can apparently use all the help he can get with the ladies. The fact that Rush Limbaugh has no self-control with his pill stash doesn’t mean you should start shooting heroin or cut any slack for people who do, or that none of his other opinions have merit. Laugh at Rush for his melodramatic rants or his portly figure, but he obviously knows something about drug problems.