In the Long Run We Are All in Debt 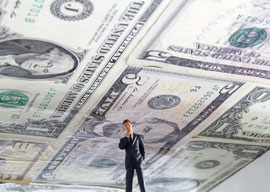 Erstwhile pop singer Aaron Carter and his wizened face recently made the plunge every onetime celebrity makes at least once in his life. The younger brother of Backstreet Boy Nick Carter filed for Chapter 7 bankruptcy on October 23, 2013. Despite his short success as a kind of happy-go-lucky serenader in the shadow of his older, more popular bro, Carter has more than $3.5 million in debt with only $8,232 in assets. His piddling possessions include a big-screen television, a couple of laptops, and a Louis Vuitton backpack”something no grown man should own.

In most cases, a fall from grace like this is dispiriting. But then Aaron Carter was never really much of a talent. Carter’s career started on the coattails of kin and has largely remained that way.

Like most child stars, little Aaron had a burst of fame followed by numerous attempts to relive that glory. Rehab for emotional distress and a lawsuit for fraudulent management were predictable stops on the road to burnout. His mismanagement of money”which includes $1.3 million owed to the tax bullies in the IRS”is no deus ex machina in the story of an aging personality, it’s a guaranteed event in our modern culture of excess and celebrity.

“If the advent of the welfare state destroyed cultural temperance and the traditional family, the rise of “borrow and spend” economics was the last nail in the coffin for what remains of the ascetic lifestyle.”

Most would call Carter irresponsible for throwing his money away and racking up a huge debt. I have a different take. What normal people might call reckless, I call a boon to the economy.

According to many popular intellectuals, the basis of economic growth is the continual accumulation of debt to finance ever-increasing amounts of spending. Economists such as Paul Krugman, Brad DeLong, Dean Baker, and just about anyone who holds a major post at a university or in the press, are plagued by a fetish for spending. For them, the economy is not a bunch of individuals pursuing ends, but a circular diagram they can simply inject with cash to produce more confidence.

This thinking stems from John Maynard Keynes, the former king of the economic profession at the turn of World War II. Keynes fancied himself a man above Victorian sensibility and traditional values. In writing to a friend, he mentioned that “I get the feeling that most of the rest [of the world outside his secretive social clique] never see anything at all….” To Keynes, the masses were “too stupid or too wicked” to grasp his unorthodox views on economic behavior.

While thrift was generally seen as ideal behavior, the sage of Cambridge and his colleagues viewed themselves as forward-thinking paragons of a new ideal”one that divorced itself from the old understanding of morality. Even a century ago, your average Joe Schmo understood that he couldn’t consume something without first producing anything. He had some incentive via social mores to pass some wealth down to his heirs. He recognized that hedonism would render his life worthless and destitute.

Keynes wished to twist this bourgeois logic on its head. A self-declared “immoralist,” the father of modern economics wanted to completely eliminate basic time horizons. Instead of saving for the future, only the present was deserving of consideration. His worldview was immortalized in his now-infamous dictum, “In the long run we are all dead.”

Turning to public policy, the political class jumped for joy at the idea of mass spending binges to offset economic dips. By the time Keynes’s treatise The General Theory of Employment, Interest, and Money hit bookshelves, his celebrity intellectual status was established. Governments the world over now had an excuse to spend tax dollars like drunk sailors.

On an individual level, this amounted to encouraging the masses to empty their wallets at their heart’s content. Whenever tragedy strikes, whether economic or natural, the public is pressured to take out a new credit card and go hog-wild at the mall. Following the 9/11 terrorist attacks, Bush the younger notably urged the American shopper to not lose hope, but have confidence in the economy. On the eve of the 2008 recession, he again told everyone to doubt the naysayers and fight back by “shopping more.” Keynes acolyte Paul Krugman never tires of screaming “SPEND MORE” from his perch of influence. The rest of the sycophants on financial television sound like parrots squawking about “animal spirits,” green shoots, and the wonderfulness of near-constant money printing via the Federal Reserve.