In the Navy!”With Gobs of Seamen! 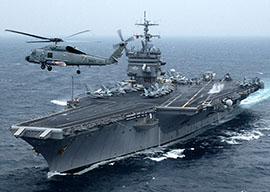 Guess what”many gays aren”t offended at all by the scandalous USS Enterprise video.

On the contrary, one LGBT website (“The Site with Homosexual Tendencies”) has these comments:

“The video is homoerotic, so I think “anti-gay” is a stretch.” “Ummm…I hardly think this video is anti-gay. It’s actually a green light to get your freak on navy boys. This XO guy is obviously totally gay and he doesn”t hide it very well either. He’s kinda hot in a man-child way.” “Hell, people would probably pay money to see this video if they knew it had sailors showering together.”

There are some negative comments, mostly directed against the Executive Officer (XO), Captain Owen Honors, for wasting his time and government money, and for behaving in a manner unbecoming an officer of high rank, second in command of a nuclear aircraft carrier, the world’s largest naval vessel, responsible for over 5,000 sailors, airmen, and Marines. But on the two gay websites I perused, I saw little anger directed at what the mainstream media is depicting as a maliciously anti-gay video.

This confirms my feeling that this video is, in fact, very gay. It is not merely a farrago of high-seas hijinks and anti-gay jokes as the mainstream media has claimed. As released to the Internet, this is gay pornography. But I don”t think this is what Captain Honors intended, nor am I saying that he is gay. But it sure appears that way, and someone or some folk with an agenda made it look that way.

Is it possible that certain parties, perhaps upset with the repeal of “Don”t ask, don”t tell,” assembled the clips to show how far open homosexuality might lead, at least in the Navy? My understanding is that the XO produced a video every week for more than a year, but it is hard to conceive that it could have been so unremittingly gay on a weekly basis. My suspicion is that this is a compilation of some of the more outrageous scenes, a distillation from a much larger body of work.

“My understanding is that the XO produced a video every week for more than a year, but it is hard to conceive that it could have been so unremittingly gay on a weekly basis.”

Scene One has the XO in a cabin or ward room with “Aviator,” presumably a fighter pilot, and the “SWO,” a Surface Warfare Officer, responsible for the ship’s operation. By some sophisticated videographic means, Captain Honors plays all three roles himself: the XO, the gay-bashing “Aviator,” and the effeminate “SWO-boy.”

“Aviator” lights the fireworks with, “This evening, all of you bleeding hearts”and you, fag SWO-boy (looks his way)”why don”t you just go ahead and hug yourselves for the next twenty minutes or so because there is a really good chance you”re going to be offended.”

This is odd, because the rest of the video is as camp as a row of tents. The so-called anti-gay banter appears, to me anyway, to be quite gay itself. “Aviator” says “fag” the way blacks jokingly sling around “nigger” among themselves.

Scene Two is a digression on the “F-bomb,” a gratuitous use of the word “fuck,” which is plain moronic.