In the Shadow of the Yanks 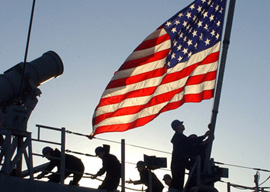 Everything was bigger with the Yanks: their soldiers, their food, and their imaginations. I was in the cookhouse with them in Kuwait before we tore across the border. We Brits had small ration boxes and they had three times the food. We had come to fight if needed, but they had come to take over. After hearing the world’s opinion of the United States being a war-hungry nation, I decided to make up my own mind after having met them properly. Dinner seemed a great opportunity. I looked for a space to eat, and a big black Marine ushered me over.

He was a huge beefy bloke and the flag on his arm was half the size of a postcard, where mine was the size of two stamps. We Brits looked like poor malnourished cousins next to their well-fed waistlines. Where we were quiet, they were loud. Where we had shortages, they had surpluses. It felt like it would be OK after we had met them. They had it covered. I sat down.

He called me “Sir” just in case I was an officer. He was polite and smart in dress, but I couldn”t get over his size. The British Army didn”t make uniforms that big; they didn”t need to. His looked custom-fitted as the cotton stretched over his hours in the gym. His rifle lay on the floor between his legs. We Brits were jealous of the M16″all black and dangerous-looking. Our rifles had a green cheek rest made of green plastic composite and a green plastic handgrip”it looked like a toy. All our special forces used the M16 because they thought it better, but for the Yanks it was standard issue.

I liked sitting and eating with them. Their food was better than we made in our camps, and their words brimmed with imagination. They spoke the same language, but with more life and more vision. Iraq wasn”t the war to them, it was just on the list. They were pumped for the fight but saw it as a chapter, not the whole novel. They talked about blowing the top twenty meters off a hill and had allocated nine hundred shells for each target. I wondered who was going to redraw the maps after the Americans had finished bombing the place where civilization began. I thought of those on the other side of the border; maybe you thought about it less in your second, third, or fourth war.

A Marine kept court about how bad the Iraqis were and I made the mistake of saying they weren”t all as he had described.

“It’s all fucked-up, man, it all needs sorting,” he replied.

The rest of the soldiers around him nodded and agreed. I asked what he meant, and he pulled a dagger from his belt. If it was a hunting knife I may have understood its use. We only carried collapsible pliers to fix things that broke; in the handle was a small penknife that would suffice for most things a soldier needed to do”cut a bootlace, slice a ration pack open, dig into the dirt when bored”but this was a dagger. Daggers only did one thing, and that was kill people up close. He was a young man from the States who knew his job and wasn”t ashamed of it, and that I could respect. He casually ate his food with a fork and with the dagger in the other hand stabbed through a map of the world he saw in the wood table.