Inappropriate Touching Among the Untouchables 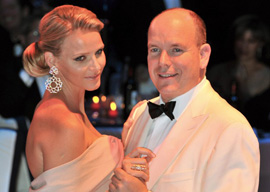 Charlene and Albert of Monaco

We all know that the rich and powerful are seldom held accountable. Take, for example, the recent case of Albert II, the Prince of Monaco, and his new wife, Charlene Wittstock. Rumors that Charlene was first kidnapped, drugged, and then forced to abide by the agreement she had signed with the Principality of Monaco—or else—went almost entirely unnoticed by the media once the runaway bride had been brought back to the palace and was allegedly sedated heavily. Her father was also reportedly held hostage and threatened unless he played ball and helped palace courtiers convince Charlene to stay put.

“Strauss-Kahn seems to think anything goes because his patrician standing renders him untouchable. Prince Albert, ditto.”

I have known the Monegasque royal family for more than thirty years. Some of my closest friends are just as close with Monaco’s ruling family, and unpleasant details have a tendency to slip out. From what I’ve been told, Albert is into rough sex with both men and women. Charlene is not, and the two have not been intimate in months. I’m told the deal is that she will one day produce an heir, and with a very generous allowance she will be allowed to return to South Africa away from the sweaty hell that is Monte Carlo. Money has allegedly already been paid upfront. The lack of intimacy between Albert and Charlene is neither here nor there. Albert is said to have already fathered two and perhaps as many as four children—all of them after a night of rough sex with multiple people of both sexes present. For Charlene to become pregnant will not raise eyebrows even among those in the know.

If what I’ve been told is true, what baffles me is how Monaco got away with it. Doping a bride and having her walk down the aisle in the movies is easy. But in real life? And for three days? How do you take one’s passport away on the whim of the ruler of a musical operetta state? Think of the amounts of moolah that may have changed hands. Buying someone’s silence is very expensive, especially in the grimy world of the place that Somerset Maugham described as “a sunny place for shady people.”