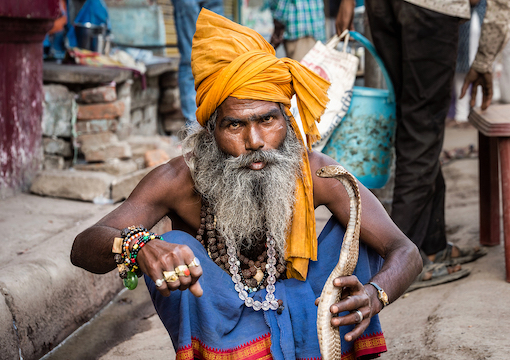 On Monday, President Trump addressed over a hundred thousand Hindoos of every caste and Vedic creed. Liberal bubble-dwellers were stunned that so many brown people would exalt our Orange Maharaja, but for anyone who’s visited the subcontinent, it makes perfect sense. The people of India love cartoonish god-kings, embrace hard-line nationalism, and for over a thousand years, most have had an ax to grind with the Muslims.

The event was dubbed “Namaste Trump,” a nod to the emerging redneck/dot-head alliance forged at last year’s “Howdy Modi,” held for the Indian prime minister in Houston. The occasion commemorated a $3 billion arms deal that will see India’s warrior caste deploy two dozen Seahawk choppers in their eternal struggle against Islamic supremacy. This comes on the heels of Modi’s controversial Citizenship Amendment Act, which grants asylum for non-Muslims fleeing Afghanistan, Bangladesh, or Pakistan. Mohammedans need not apply.

Before anyone could say Trump hates all Muslims—an accusation the president would surely characterize as very, very, very wrong—he escorted his lovely third wife to visit the Taj Mahal. Adored by world travelers, this 17th-century architectural wonder is an enduring monument to unashamed masculinity. Its fat phallic structure, carved from the purest marble, holds the remains of the prolific polygamist Shah Jahan and his beloved Persian wife. The Mughal emperor’s other honeys are interred here and there around town.

During Trump’s speech, delivered in a spotless new cricket stadium, the president credited India’s success to the nation’s pantheistic philosophy.

“In just seventy years, India has become an economic giant, the largest democracy ever to exist, and one of the most amazing nations anywhere in the world….”

“While our nations have many differences, they are both defined and propelled by a fundamental truth…that all of us are blessed with divine light, and every person is endowed with a sacred soul…. ‘The moment I stand in reverence before every human being, and see God in him, that moment I am free.’”

Upon hearing the quote from Swami Vivekananda—pronounced by the prez as “Veevay-kamun-nund”—the enormous crowd, all dressed in white, stood and cheered for the American god-king. I wasn’t surprised.

This time last year, I was privileged to explore the temples and mountain ranges of northwest India. Talk about welcoming the stranger. From Varanasi to the snowy Himalayas, every time I told a Hindu I’m an American, they would bobble their heads side to side and heap praise upon our president. “America? Very good! You are Donald Trump!” or, “Trump and Modi, yes! Good friends!” or, “Donald Trump, he is strong man!” These were rickshaw drivers and chemical engineers and trekking guides, and they were full-on MAGA.

Even with all the monkey temples, this orangutan-worship threw me for a loop. Then one night, it made sense. I was up late with a guesthouse proprietor in a predominantly Muslim neighborhood, where every morning at 5 a.m., I woke up to the muezzin’s “Allahu Akbar” alarm. Deep into a bottle of whiskey, the proprietor raised his glass to a roomful of Asian tourists and said, “In India, we say…”—dramatic pause—“KILL THE PAKISTANIS!” The Asians stood frozen with glasses in the air. “Just kidding, just kidding,” he reassured them, but as they drank, he continued, “Seriously, though, seriously—kill the Pakistanis.”

If the scars from the Mughal invasion haven’t faded, the wounds inflicted during the 1947 Partition are still bleeding. Following WWII, the western portion of British India was divided into Pakistan on one side, the Indian states on the other. During the subsequent population transfer, over 7 million Hindus and Sikhs were forced east across rugged terrain, many on foot, and just as many Muslims were forced west. The migration became a gruesome parade of rape and murder, leaving over a million dead and a hundred thousand women violated.

Both sides still feel the sting, and they don’t mind telling you about it. Every day brought the fresh air of bigoted candor. In some places, that was the only fresh air I could hope for.

India’s colorful aesthetic often juxtaposes the gorgeous with the grotesque. It reminds you of how squeamish the West has become. In one temple you might find Vishnu, the preserver, reclining on a placid cosmic ocean, dreaming our universe into existence. In another you’ll see Kali, the black goddess of time, wearing a garland of severed heads and licking blood off her sword. There are river goddesses and monkey gods and lascivious avatars. Chanting priests perform ancient rites, ladling ghee onto the bulging stone penis of Shiva. For Hindus, all of these are valid images of the Godhead.

Westerners may sneer at the throngs of devotees gathered under the gaze of their idols, but if you’ve ever seen Taylor Swift or Joel Osteen perform in a packed arena, you know that our postmodern darshan is no better than chilled monkey brains. As with ancient Greece, there is genius at the heart of Indian paganism, pulsing beneath its tacky veneer. But the Indian mind is also permeable. They’ve fallen in love with our prosthetic gods, Donald Trump among them.

In India’s cities, one notices that most commercials are whitewashed. In fashion ads, faces with obvious South Asian features are digitally lightened. Music videos feature only the palest stars. Giant images of a light-skinned Modi loom everywhere. The sacralization of European blood runs deep in Indian history.

Despite the denial of Hindu fundamentalists, both philology and genetics support the theory that Vedic civilization emerged from Aryan raiders. Over three millennia ago, chariot-driving marauders descended from the European steppes to dominate the indigenous people along the Indus and the Ganges. Over the course of many generations, Aryan conquerors and subjugated natives fused into a complex, hereditary caste system. Today, the casual observer can contrast the temple Brahmans’ typically light skin with the untouchables’ dark hue to find evidence of this ancient invasion.

These days, sacralization of the priestly bloodline spills over into a pop culture worship of whiteness, stirring the resentment of Hindu purists and Marxist subversives alike. The swastikas make the whole scene that much weirder.

There are more swastikas in India, dear reader, than are dreamt of by the most paranoid Jew. The whirling flames of the sun god adorn temple walls and roadside idols across the Hindu world. In its own context, the swastika represents purity and good fortune. To my hypersensitive American eyes, they look like props in some ’70s B movie where postwar Nazis who can’t handle the Antarctic chill just crash-land their flying saucers into the Ganges, dust themselves off, and emerge to rule over the Communist natives.

Walking the streets of Varanasi, the Hindus’ holiest city, you’ll see these swastikas all over the place. Then for the next five blocks, you’ll find rows of old-school hammer-and-sickle flags strung up between telephone poles. The Hindus I spoke to just shrugged it off—some of the loudest advocates for Indian nationalism have been socialists. In two Tantric ashrams, I saw swastikas imposed over six-pointed stars, same as you’d find in a synagogue hate hoax, only symmetrical. If you’re into mind-bending diversity, India has it all.

Unfortunately, there are also more mobile phones than toilets. But where there’s faith, there’s hope. Trump has promised that Modi will magic that problem away, too. The president declared on Monday:

“In a single decade, India has lifted over 270 million people out of poverty. Under Prime Minister Modi, for the first time in history, every village in India now has access to electricity. 320 million [more Indians] are right now connected to the internet!… Over 70 million more households…have access to cooking fuel, 600 million more people have access to basic sanitation, and incredibly, twelve Indian citizens are lifted out of extreme poverty every single minute of every single day.”

These claims are so incredible, only a superstitious Hindoo would believe any of it. But believe it or not, I’ll be damned if it isn’t true.