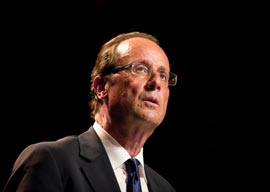 From the unwanted compulsory television point of view, there are far worse airports than Paris Charles de Gaulle. At least no sound emanates from the devilish screens installed there, whereas in many airports the sound is turned on loud enough to be hard to ignore, but too soft to be intelligible (the volume must have been carefully calculated by someone with this in mind). Oddly enough, the intonation always suffices to tell you that what is said is drivel, in the same way that a dog can understand what you say by the tone of your voice. Broadcast drivel has the same intonation in all languages.

I glanced up at a screen in the Paris airport and there was President Hollande, looking, as usual, like the deputy head of the geography department of a secondary school sometime in the 1950s. Poor chap! It is not his fault that he has no presence.

Anyway, a kind of ticker tape ran under his silent screen pronouncement, telling us what he said. And what he said was that economic growth was the best way of tackling unemployment. Thank you, M. Hollande, that had never occurred to me before. I had thought the best solution was to give everyone a job, whether or not any productive work is attached to it. The Soviet Union, after all, never suffered from idle hands.

“I have been reading the newspapers for more than 50 years without its having had any noticeable effect on the course of events, or even on my own little life.”

Nobody else was looking at M. Hollande. After he disappeared from the screen, we got the weather forecast for Buenos Aires, Rawalpindi, and Brisbane, and many other places too. I made (involuntarily) a mental note that it was frightfully cold in Montreal, minus 17 degrees Celsius in fact, whereas in Los Angeles it was 23 degrees Celsius. My brain works as a kind of sieve, retaining what is utterly useless to me and forgetting what is essential, such as where I have put my spectacles. I wish it were the other way round”that I forgot the trivial and remembered the important”because I must spend at least a week a year in total searching for what I have absentmindedly mislaid. On the other hand, I have never forgotten the date of the Treaty of KÃ¼Ã§Ã¼k-Kaynarca.

Someone must have noticed that no one watched television in the airport, so they installed screens for people to play games while they await their flights. In front of me were two grown men playing electronic football. Talk about bread and circuses! The men who played it took it terribly seriously, punching the air when they scored a goal, and I was astonished to see how similar it was to the broadcast of a real football match. There was the same switch in camera angle, from high up on the roof of the stadium to the sideline as a player took a corner; when a player just missed the goal, there was a close-up of him expressing his disgust and frustration. A fouled player rolled on the pitch in agony; the referee held up a yellow card against the virtual player responsible.

One of the functions of literature is to enable us to grasp the world imaginatively through the eyes of others. I suppose this game gave its players some faint insight into what it is like to be a star player in a huge stadium in front of a vast crowd: without, of course, the vast salary or the inconvenience of having to be physically fit and subject to injury.

Our flight was called. One of the advantages of flying Air France is that it offers you newspapers”Le Monde, LibÃ©ration, and Le Figaro, as well as the sports daily, L”Ãquipe“free of charge. I was astonished to notice, however, that apart from myself (actually, my wife) and one person who took L”Ãquipe, no passenger availed himself of a newspaper. It must surely augur ill for the French press that the public”and air passengers are probably above average in intelligence and in level of education”will not read it even when offered it free of charge.

Is it that the public is not interested in the news, or is it that they get their news by other means? Is it that the political class is now so distinct and cut off from the rest of the population that the latter now feels that public affairs are as remote from their real lives and interests as the Treaty of KÃ¼Ã§Ã¼k-Kaynarca from mine? And if so, is it wrong to feel like this? After all, I have been reading the newspapers for more than 50 years without its having had any noticeable effect on the course of events, or even on my own little life.