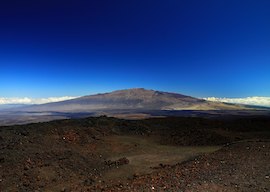 Typically, when people use the phrase “a hill to die on,” they’re not speaking of a literal hill. So it’s a wonderful, terrible irony that the hill upon which science has chosen to die turns out to be an actual hill.

What are the odds?

That hill is Mauna Kea, located in Hawaii. If measured from its underwater base, Mauna Kea is the tallest mountain in the world. It’s also the highest point in the state of Hawaii, peaking at 13,803 feet above sea level. Due to its height, and the lack of artificial light anywhere nearby, it’s also one of the darkest places in the U.S., perfect for stargazing. Which is exactly what some science eggheads are trying to do. Ten years ago, an international coalition of astronomers announced plans to build a state-of-the-art, $1.5 billion telescope atop Mauna Kea. With a primary mirror measuring thirty meters across, the “TMT” (“Thirty Meter Telescope”—astronomers are nothing if not creative with their telescope names) would be a one-of-a-kind tool for exploring the universe and advancing our knowledge of our solar system and beyond. It’s projected to be eighteen stories tall, with a span of 1.44 acres. This’ll be one badass sumbitch. Let’s just say that if any shape-shifting aliens ever try to land here to mess with Kurt Russell, this baby’ll be all over it.

Except there’s just one hitch. To the superstitious indigenous poi-eaters, Mauna Kea isn’t a mountain at all. It’s a god, an ancient deity. They literally see it as a living being (I’m not speaking of the grass and trees that grow on the mountain; I mean the mountain itself). So sacred is this mountain that only Hawaii’s “high chiefs” are allowed to hula their way to the summit, where they bury their dead (said dead often including the high chiefs themselves, who expire en route due to the strain of lugging a bloated Polynesian corpse thousands of feet up a mountain). Hawaiian commoners, who can’t be buried at the summit, compensate by burying their children’s umbilical cords at a lower elevation as an offering to the great mountain god (I’m not entirely sure that a mountain god would see littering his body with rotting umbilical cords as a good thing. But hey, what do I know?).

For almost a decade, Hawaiian politicians, activists, and judges have blocked construction of the TMT because it will “violate” their giant rock god. Nobody doubts the scientific benefits of this telescope. This ain’t California’s high-speed rail; everyone agrees it would be a major boon for mankind. But the Hawaiians don’t want us putting a little observatory hat on the head of their deity (for fear it might end up looking something like this). As local activist Joseph Kualii Lindsey Camara told the Hawaii Board of Land and Natural Resources during a TMT hearing in 2017,

I, and other lineal descendants always think of Mauna Kea as a living family member. It assures that I care for our Mauna as we would a kupuna (grandparent, elder), always with respect and as someone we turn to for wisdom. It assures that I consider the Mauna’s needs before my own. When I look at Mauna Kea I do not see an inanimate geologic mass with a good view, I see an elder who provides every resource needed for my safety, well-being and survival. I see my kupuna who should always be treated with the deepest respect and gratitude…. I view Mauna Kea as a temple, a family member, a living deity.

Using this argument, Hawaiian politicos and judges have for years been able to successfully obstruct the project.

As I’ve written in previous columns, abortion isn’t my hill to die on. It’s just not my pet issue. But this has to be said: Hawaii is one of the most historically and consistently pro-choice states in the U.S. (indeed, the state fully allows partial-birth abortions). Just last week, Hawaii senator Mazie Hirono helped torpedo the GOP-sponsored “born alive” bill, which would have mandated medical care for babies born alive during an attempted abortion procedure.

So wrap your brain around this: In Hawaii, a baby is not a living being entitled to protection under the law, but a mountain is. A viable newborn is considered as inanimate as a rock, and an inanimate rock is considered as alive as a human. You don’t have to be pro-life to appreciate just how breathtakingly insane that is. Think what you want about abortion, but this is just nuts. You can argue abortion laws forever, but everyone except the most extreme pro-abortion loons (“A fetus is just a tumor, maaaan!”) at least concedes that a viable fetus is made of living tissue and a rock is not. Are we really living in an age where that simple truth is now controversial?

As the TMT suffered one defeat after another at the hands of Hawaiian politicians and judges, surely the atheist rationalist IFLScience crowd expressed its outrage. I mean, imagine if the construction of a hugely important scientific project was thwarted by a bunch of Republicans in the South because local Christians consider the land on which the project is to be built “sacred.”

“We want to build a groundbreaking new telescope atop Emory Peak.”

“Sorry, we can’t allow that. Creationists believe that this is the site where the dinosaurs were killed by Jesus to gift Texans with the blessing of fossil fuels, so it’s off-limits.”

How is that any more ludicrous than claiming that your umbilical-cord-laden mountain is a living deity entitled to full protection under the law? Yet the smug, Bill Maher-loving atheist men of science have not only been silent on the Mauna Kea controversy, they’ve actually weighed in on the side of the poi polloi.

From everyone’s favorite “Oooh, look how clever and enlightened we are, mocking those stupid superstitious Christians” website, IFLScience:

Conflict between Indigenous and Western interests are part of a long history of colonisation and exploitation. If the traditional custodians of the land reject proposals for development, they might face aggressive legal action. “No” is rarely a good enough answer for those exploiting the land. It is disheartening and frustrating to witness fellow scientists dismiss the connections indigenous people have to their land. We cannot simply disregard these connections as myths and legends, and comparing TMT protesters to Biblical Creationists is disappointing…. The TMT demonstrates a microcosm of the challenges indigenous people face when their traditions are dismissed by Western interests for intellectual or economic gain. We astronomers need to acknowledge that we do not have an inherent right to develop Mauna Kea. And if a consensus cannot be reached we must be willing to consider a different home for the TMT.

Literally, an admission that “intellectual gain” is being sacrificed to local superstitions. Hello, Bill Maher? Penn Gillette? Elizabeth Warren, who just a few days ago tweeted out “I believe in science” while slamming Republicans for their anthropogenic climate change “denial”? Where are these noble students of Galileo, these champions of science, regarding Mauna Kea?

The deafening silence tells you everything you need to know about those frauds. Today’s leftist atheists may claim to have no religion, but that’s a lie. Their religion is “anti-racism,” and opposing the noble natives in Hawaii would be “racist,” so intellectual gain be damned.

Scientists declaring a mountain a living deity is no different than scientists all of a sudden discovering that yes, a man who claims to be a woman “on the inside” is, wouldn’t you know it, totally a biological woman! Scientists jettison truth in the face of political pressure every day of the week. Maybe I’m a little biased here, a little raw, having just lost my father four weeks ago after he went into the hospital with a non-life-threatening condition and wound up dead, surrounded by a bunch of white-coats mumbling, “Derrr, we dunno wut happened,” but doctors and scientists are as full of shit as anyone else (to be clear, that’s not intended as an endorsement of the even more shit-filled New Agers and crystal worshippers). Humans are fallible. When Elizabeth Warren and Hillary Clinton claim to “believe in science,” what they mean is “We believe in scientists,” and believing in humans is just as retarded as believing in a giant talking mountain that wants you to shove your umbilical cord up its ass.

Scientists get things wrong all the time. Many times, the mistakes are honest. What’s more worrying to me is that, more and more, science in the West (and honestly, what the fuck would the past thousand years of science be without the West?) is being held hostage to politics. I’m not unsympathetic. Scientific research is not always immediately profitable. It doesn’t pay for itself like, say, a new app, a crappy rap album, or a porno. Scientists are like teenagers; they need to live off someone. And it’ll either be Mom and Dad or the pedo down the street. That need for funding all too often puts scientists at the mercy of governments, grant writers, and corporations. Every time some new wonder drug is taken off the market for killing a whole bunch of users, I wonder how many science dudes suspected that the miracle boner pill they were working on actually turns your kidneys to viscous goo, but were afraid to say anything lest the pharmaceutical company that pays their bills kick ’em to the curb.

How many scientists disagree with Crazy Eyes Cortez about the world ending in twelve years, but are afraid to say anything because of the potential repercussions?

How many medical and scientific professionals secretly fume about “tranny science,” but stay quiet because they know that anyone who speaks out against it, anyone who states gender truths that were perfectly acceptable to say ten years ago, pretty much gets ruined? You want your papers to still be accepted by academic journals? Well, here’s what you cannot challenge.

I don’t think most scientists are cool with the TMT being held hostage to ancient superstitions. But they know what’ll happen if they appear to insult “indigenous” people of color. They know they’ll be tarred as racists. They know their careers will be over. So they play along, and if a little “intellectual gain” has to be sacrificed, so be it.

Two months ago, the Hawaii Supreme Court ruled that construction of the TMT can begin, under a plan that forces the demolition of other telescopes in Hawaii to appease the angry god (yes, perfectly good observatories will be destroyed). Local activists say that’s not enough, and they’re planning protests and roadblocks to stop construction (essentially “Operation Rescue” to save the Rock Biter from The NeverEnding Story).

Will scientists have the guts to stand up for intellectual gain? Take a guess. Scientific integrity died on Mauna Kea, killed by political correctness.

R.I.P. science. Say a prayer for the dying and bury the rotting corpse on umbilical hill.