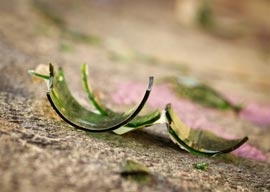 With a little effort I can work myself up into a fury of indignation about most things, but strangely enough not about climate change. The whole subject bores me because I can”t really make the whole of the planet the object of my affection or concern. I wish it no harm, of course, but I cannot say that I love it, any more than I love the oxygen and nitrogen in the air. I don”t want the jungles to be cut down or the glaciers to melt, but that is mainly for aesthetic reasons, and I wouldn”t want it even if the other effects were wholly beneficial to Mankind.

I am perfectly prepared to believe that there has been global warming and even that Mankind’s activities have played some part in bringing it about, just as I can easily believe that certain people will use global warming as a means of making a fortune for themselves. Certainly I dislike polluted air, but I am not sure that all the effects of global warming will be bad. In the 13th century, for example, when the world climate was much warmer than it is now, there were vineyards in the far north of England, a precedent that must give some hope of gainful employment to the chronically unemployed there. Not long ago I read a paper in a medical journal in which the effect on mortality of excess hot and cold weather was estimated for the world population. Excess of cold was responsible for (or, more accurately, statistically associated with) between 17 and 18 times more deaths than excess of heat. This is not the same as saying that a general and constant increase in global temperature will be beneficial for Mankind’s health, but it does at least raise the possibility that it will be. Oddly enough, the paper”in whose findings I would not place enormous faith, for they depended upon an immense amount of statistical manipulation that I could not understand”was not widely reported, though I expected it to produce a veritable storm of commentary. But sometimes silence, not honesty, is the best policy.

“When I think about the lack of connection between saving the planet and throwing bottles at the police in the Place de la RÃ©publique, I feel myself working up to a pleasant state of outrage and indignation.”

Working oneself up into a fury of indignation is one of the great consolations of human existence, which is otherwise apt to be so tedious and unsatisfactory, and which is why riots are so gratifying and enjoyable to those who take part in them. There was a small such riot in the Place de la RÃ©publique to mark the conference of world leaders in Paris on climate change. The lovers of the planet and its biosphere did not seem to be lovers of the Place de la RÃ©publique, whose ground they covered with shards of glass from the smashed bottles that they had hurled at the police”but then, of course, they knew that their mess would be cleared up after they left by somebody else. Why else do we pay our taxes? When I think about the lack of connection between saving the planet and throwing bottles at the police in the Place de la RÃ©publique, I feel myself working up to a pleasant state of outrage and indignation. Thank you, rioters.

Then, of course, there is the lack of connection between the conference itself and saving the planet. Apparently 150 heads of state or government converged on Paris for the conference, a waste of energy if ever there was one. Only a handful of countries account for the vast majority of emissions and pollution, and they will make all the decisions (if there are any decisions, that is, and if those decisions are actually adhered to, which is doubtful). The prime minister of India will be no more swayed by the opinions of his counterpart of Belize than by the bottle-throwing activities of the young European spoiled-brat radicals of the Place de la RÃ©publique. What was the point of delegates from Guinea-Bissau, say, or from Paraguay attending? I can well understand why they wanted to go to Paris at someone else’s expense, but saving the planet was not one of their reasons.

We should spare a thought, though, for the leaders of very small and unimportant countries who attend elite jamborees such as this. They must be prey to horribly conflicting emotions. On the one hand it is very gratifying to them to mix with the great ones of the earth under the pretense that they are in the same category of human being. On the other hand, it must be galling for them, who bestride their countries as Gulliver bestrode Lilliput, to come face-to-face with their own utter insignificance on the world stage. They will do their Christmas shopping and hurry home to where they are important.