Individual Liberty Versus the State 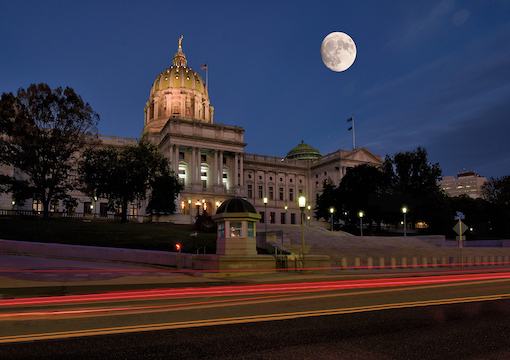 In a heartening sign, a number of counties in Pennsylvania have chosen to defy Gov. Tom Wolf’s shutdown order.

The Beaver County Board of Commissioners announced on May 8 that the District Attorney will not prosecute businesses that violate Governor Wolf’s order and reopen. Beaver County remains a red-phase county, while the rest of the state’s western and southwestern counties moved to the yellow phase on May 15. Lawrence and Mercer counties got the yellow signal to reopen May 8.

“Beaver County finds itself singled out as the only western Pennsylvania county in the red category surrounded by a sea of yellow,” said Commissioner Chairman Daniel Camp. “This is an invisible wall surrounding and isolating Beaver County residents and businesses…. [O]ur business owners and residents cannot become prisoners in our own county.”

While the state still considers Beaver County in the red phase, District Attorney David Lozier said he will not prosecute businesses for reopening and following the guidelines set out for counties in the yellow phase.

Lancaster County is the most recent county to announce plans to reopen, having sent a letter to the governor saying the county is ready to reopen May 15. County leaders noted hospitals have not been overwhelmed and have the capacity to treat COVID-19 patients.

“We prefer to act with your cooperation, but we intend to move forward with a plan to restore Lancaster County,” the letter states. “Governor, we don’t question your motives, however given all that has unfolded over the past several weeks, we must question your methods. We believe we share the same goals: public health, safety and an economy that can begin to recover.”

In addition, district attorneys from several counties, including Lancaster, York, Lebanon, and Dauphin, have said they will not prosecute any businesses for reopening. And some county sheriffs have also said they will not enforce the restrictions.

County sheriffs in Cumberland and Perry counties have posted statements on Facebook that they will not cite businesses that operate in defiance of Governor Wolf’s shutdown order.

“It is good to see that there are so many Americans who are willing to push back against the authority of the state’s lockdowns.”

“Our Office will not be enforcing any ‘order’ that violates our Constitutional Rights,” said the post on the Cumberland County Sheriff’s Department Facebook page. “Sheriff Anderson has stated ‘I have no intentions in turning local business owners into criminals.’”

In Bellmawr, N.J., however, the state has proved to be less hospitable to individual liberty. The owners of a South Jersey gym that continues to reopen in violation of the governor’s executive order were cited for a third time on Wednesday, officials announced. In addition to a summons for violating Gov. Phil Murphy’s stay-at-home order, Atilis Gym owners Ian Smith and Frank Trumbetti were charged with making a public nuisance this week, according to Superintendent of the State Police Colonel Patrick Callahan.

After being issued the citation, Trumbetti told NBC10, “I will not close my doors again unless I am behind bars and unable to unlock the door. I guarantee you this door will be open every single day.”

“Prosecutors’ offices and local law enforcement are the first lines of attack,” Murphy said during the news conference, adding that the state was not “there yet” on reopening gyms. “It’s indoors, it’s close, physical activity. We’re concerned about it.”

Callahan said the state has been fairly evenhanded across the board with respect to businesses violating the executive order. Barbershops, massage parlors, and other businesses have all been cited multiple times before eventually being shut down.

The owners could be fined up to $2,000, but owners Ian Smith and Frank Trumbetti told 6ABC they plan to take the matter to court. An online fundraiser was also launched to help the gym raise money to pay for its court costs. It had raised more than $40,000 as of Wednesday.

The Law Offices of Jef Henninger has offered to represent for free gym members at Atilis Gym who get arrested for violating the governor’s executive order.

“Unfortunately, at least one arrest was made today at Atilis Gym,” the law office said in a statement.

We continue to stand by to assist gym employees or members that get arrested today. If any protesters get arrested or cited, we can discuss the case with them as well. There is no need for a GoFundMe page because if we take the case, it will be pro bono. We will not take any money from anyone that was arrested today. We will either accept the case or we won’t, although we hope to be able to accept as many people as possible if there are multiple arrests.

Last week, a lawsuit was filed in Lake County, Ohio, against Ohio Department of Health Director Dr. Amy Acton on behalf of 35 gyms across the state to be allowed to reopen as many other businesses have. On Wednesday, the judge granted the injunction, saying law enforcement officers, prosecuting attorneys, and the attorney general are not allowed to enforce penalties for violating the public health order to stay closed. The ruling did state that gyms and fitness centers do need to operate in compliance with all applicable safety regulations.

“The general public would be harmed if an injunction was not granted. There would be a diminishment of public morale and a feeling that one unelected individual could exercise such unfettered power to force everyone to obey,” wrote Common Pleas Judge Eugene Lucci. “The public would be left with feelings that their government is not accountable to them. Prolonged lockdowns have deleterious effects upon the public psyche.”

It is good to see that there are so many Americans who are willing to push back against the authority of the state’s lockdowns. After all, in our devastated national economy, who gets to decide what counts as an essential business? Those who have control over the language? And don’t people have a fundamental right to take certain risks in living their lives?

“Whether a business opens, and whether an individual feels safe enough in his surroundings to patronize the business, are questions our citizens must answer for themselves,” says Lebanon County District Attorney Pier Hess Graf. “Law enforcement exists to protect and serve our communities; we do not exist to enforce arbitrary regulations which rip away a roof over a family’s head or food in a child’s mouth. Our police officers have tough enough jobs without the added duty of prosecuting local small businesses.”