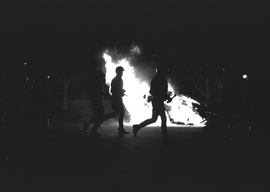 I slept through the only riot I was ever sent to cover as a reporter. Having traveled a long way I was very tired, and by the time I woke the riot was almost over. Still, I was able to describe with some vividness the acrid smell of burning rubber in the streets and the smashed glass and emptied shelves of the storefronts, and I did see a few people adding fuel to the flames of a barricade not far from my hotel (I later saw one of the perpetrators in an expensive restaurant). Such was my description that no reader would have guessed that I had slept peacefully through the violent proceedings. Strangely enough, my experience of being a foreign correspondent, if that is what it was, has never caused me to doubt the veracity of what I read in the newspapers, which I swallow as a boa constrictor swallows a goat.

However, I have followed riots around the world vicariously ever since, and it seems to me that the principal precondition of such events in the modern world is clement weather. The association is much stronger than with, say, injustice, partly because there is complete agreement as to what constitutes clement weather, whereas what constitutes justice has been in dispute since at least the time of Plato. We all recognize good rioting weather when we see it, but injustice”well, we could go on arguing about it for days. Everyone can contain his anger in the rain.

The facts of the case of Michael Brown in Ferguson, Missouri, are unlikely ever to be known to everyone’s satisfaction. Leopold von Ranke, the great German historian, said that history is what actually happened, because what happened actually did happen, and surely we can all agree with that; the only fly in the ointment is in the determination of what actually happened. Anyone who has ever had a marital argument will know the difficulties involved. Personally, I should be surprised if any firm believer in civil rights concluded that Michael Brown was trying to grab Officer Darren Wilson’s gun or was otherwise threatening him, and was shot in self-defense”or if any calumniator of American negroes (as they were once known, not necessarily disparagingly) or deplorer of ghetto culture concluded that Michael Brown was an innocent, lovable chap gunned down out of sheer racial malice by said officer. Facts are much more malleable than prejudices.

Fortunately, we don”t have to know everything about the case to reflect a little upon it. Let us, for the sake of argument, take the worst possible case (worst, that is, from the point of view of the local police force), namely that the officer had absolutely no reason whatever to react violently and that he shot the young man dead from sheer, unadulterated vicious feeling towards the blacks of his town. What then?

Let me interject that I hold no brief for the police in America, at least in the cities. They inspire me with a frisson of fear every time I see one, though I break no law. Their manner is more that of masters of the public than of servants of the same; many of them seem to be the kind of people who wanted to be soldiers but couldn”t make the grade because they were not fit enough. They look menacing and seem to shoot to kill on relatively slight pretexts (or perhaps they are just bad shots). I have little doubt that if I were black my less than warm feelings toward them would be a good deal cooler still. Their increasing militarization, on the flimsiest of pretexts, is another reason to mistrust them. Alas, the British police are increasingly modeling themselves on the American, as if they were permanently on riot duty.

If the shooting of Michael Brown were as I have depicted it for the sake of argument, it would be a terrible crime, an injustice worthy of the condign punishment of the perpetrator. Moreover, if the crime were as described, without the faintest trace of justification, it would not be difficult to imagine that it was the summum malum of a pattern of injustice and oppression in the town.

But to hate injustice is not necessarily to love justice; and one might have supposed that the first duty of those who claim to hate injustice was themselves to act justly. Virtually by definition, those who riot violently (as did a small number of the protesters) do not act justly, for almost always they do damage, sometimes much damage, to the interests of those who have not caused the injustice against which they supposedly protest, and therefore commit an injustice against those who are unknown to them. Such is the case of the crimes against property, or rather, as my friend the economist Peter Bauer used to insist, against the owners of property, in Ferguson (property cannot suffer, but its owners can). Two injustices do not make righteousness.