Ines and The Jets 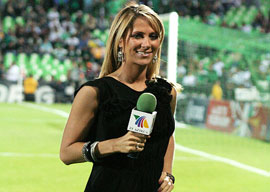 I want to be fair to women who call themselves feminists. Feminism is just a word, and words mean many things to many people. It’s an oft-heard trope that, as many a bumper sticker on many a Volvo seen in many a college town has proclaimed, “Feminism is the radical notion that women are people.” And it’s certainly many times protested that “libbers” don’t go in for male-bashing at all; they respect men perfectly fine; they just want equal rights for equal pay, equality of opportunity, and so forth.

I think we can safely assume that the unnamed female reporter who encouraged Sainz to take steps to rectify this terrible wrong is a less attractive woman than Sainz.

Many who embrace the “feminist” label are no doubt totally reasonable, sane individuals. (Of course, my personal experience with self-titled feminists leads me to question the assertion, stubbornly insisted upon through the years by many an earnest-sounding spokeswoman, that “libbers” aren’t indeed quite frequently angry man-haters indulging in spiteful and cruel invective against the penis-possessing half of the human race… Still, I’m willing to accept, for argument’s sake, that the sampling of feminists I have encountered may not be representative of the group as a whole.)

Be that as it may, the recent promotion of the victimhood of Miss Sainz by many women’s groups is just pathetic beyond belief. It would be laughable, in fact, were it not so thoroughly grating.

Sainz, who works for Mexican network TV Azteca, is—at the risk of sounding sexist (that is, truthful)—a pretty young thing. Like many attractive women, she likes to dress sexy. I think it’s fair to assume that she enjoys the attention she gets for her looks. One may also observe that showing off her body has helped her career. Nothing particularly new or revealing there—other than her skimpy wardrobe, of course. 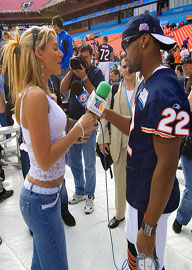 Last week, while covering a New York Jets practice at the team’s facility in Florham Park, Sainz was standing on the sidelines delivering a report to a cameraman. In her skintight white shirt and jeans, it seems she won the notice of many members of the team, as well as some of the coaching staff, including head coach Rex Ryan. Some Jets, it seems, deliberately threw a football in her direction and engaged in small-talk, in a playfully flirtatious manner. It may have been immature and stupid, but Sainz later said it didn’t bother her at all. “I wasn’t offended,” she declared, calling the back-and-forth she engaged in with the players and staff an “amicable” exchange.

Later, in the locker room, en route to interviewing team quarterback Mark Sanchez, some members of the team apparently whistled and assailed the comely Mexican newsbabe with hearty catcalls. Sainz tweeted that she felt like she was “dying of embarrassment,” but that she chose to ignore the crude behavior.