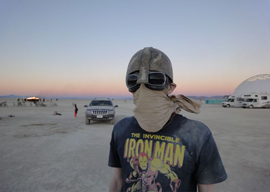 Burning Man defies easy categorization. Wikipedia describes it as “an annual week-long event held in the Black Rock Desert in Nevada,” but that doesn”t tell you very much.

Burning Man is many things: a post-apocalyptic phantasmagoria, an experiment in radical self-reliance, a modern tribal gathering, a vast open air art gallery, a forum for self-expression, a platform for exhibitionism, a music festival, a great place to get high, an alternative to the quotidian and, for many, a catalyst for much subsequent proselytizing. But how do all these aspects relate to each other and, more importantly, what is it like when you are there?

The Black Rock Desert is in Nevada, about seven hours northeast of San Francisco. It is a huge, utterly flat expanse of compacted white dust (it was here that Thrust SSC set the land speed record in 1997). Rock strewn hills circle this white expanse. 50,000 people come here every year for the first week of September. They create a temporary settlement shaped like a horseshoe. The horseshoe is 6 miles wide and 6 miles deep and has orderly streets separating the tents, RVs, wigwams, marquees, disco tents, and the occasional festival sized stage with lights and sound system. The 3 mile space in the middle of the horseshoe is entirely open. It is known as the “playa” and is dotted with works of art of every conceivable size and style. The installation of these works begins months earlier.

The absence of regulations and the extreme environment create the potential for many kinds of hazards. And yet, over the week that I was there, I saw nothing untoward.

Cars and tents are not allowed on the Playa. The only exception are “art cars” “ vehicles ranging from a fully mechanical spider the size of a mini to an enormous pirate’s ship on wheels, complete with three masts and mega sound system. In the middle of the Playa is the huge wooden effigy of a man. The man is burnt at the end of the week.

A striking aspect of Black Rock Desert is the quality of the light. In September the sun is still strong; it reflects off the white dust and floods the playa with extraordinary intensity. The temperatures are high during the day and low at night. There is a surprising absence of other life forms “ no flies, no ants, no mosquitoes, nothing. You can leave food outside all day and it will remain untouched.

Other than the 5 mile an hour speed limit for vehicles, there are no restrictions at Burning Man. People choose to make use of this in different ways. Some walk around naked – a hazardous enterprise given the frequent dust storms. Most people’s daytime garb resembles something from Mad Max “ a millenarian hybrid of robot and fur-clad caveman. Psychedelic drugs are also popular, although the increased police presence of recent years means that they are increasingly hard to come by at the event itself. Many people come to Burning Man and do not take drugs at all. However, walking across the playa at night and seeing the fantastical shapes of art cars outlined in neon crossing the horizon, it is hard not to think that this event was designed by people on psychedelics for people on psychedelics.