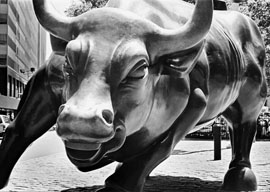 Typical documentaries, such as Waiting for “Superman” and Freakonomics, are made by people who know more about lenses and lighting than about their subjects. In contrast, Inside Job, a competent condemnation of Wall Street’s role in the recent economic unpleasantness, is the work of Charles Ferguson, a smart, rich generalist who didn”t get into the movie business until he was 50.

After obtaining a Ph.D. in political science from MIT, Ferguson cashed in on the dot-com bubble. In 1996, he sold FrontPage, a mediocre web-development program (which I, unfortunately, used for years) to Microsoft for $133 million. Not surprisingly, Inside Job contrasts Wall Street’s ethical cesspool with Silicon Valley’s supposedly shining moral high ground. (No mention is made of the options-backdating chicanery tainting Steve Jobs and other tech titans.)

Ferguson is angry that the Obama Administration hasn”t arrested any investment bankers. He helpfully outlines a hardball strategy for potential prosecutors: Round up Manhattan call girls and persuade them to roll over on their trader johns for putting hookers and blow on company expense accounts as tax-deductible “research.” Then terrify the traders into snitching on the Big Boys.

Instead, Obama has appointed numerous banksters to high office.

Inside Job is longer on well-informed indignation, talking heads, and bar charts than on directorial dazzle. Ferguson’s chief cinematic flourish is the cheap but effective trick of helicopter shots showing giant banks” skyscrapers backed by ominous, irritating electronic music. I was soon convinced that the architecture’s malignity was a mere excrescence of the evil within…until Ferguson lingered on a malevolently looming Empire State Building. “Wait a minute!” I finally realized. “I like the look of the Empire State Building! And its tenants aren”t vampire squid colossi, they”re down-on-their-luck small-timers. Hey, my emotions are being manipulated!”

Still, Ferguson understands the financial details enough to make a coherent story (superior to Oliver Stone’s recent Wall Street sequel) about how money, power, and ideology corrupted so many.

Inside Job‘s most original segment details the cozy conflicts of interests through which numerous economists, including superstars Larry Summers, Martin Feldstein, R. Glenn Hubbard, and Laura Tyson, got rich off financial-industry directorships and consulting fees, all while pretending to provide students and citizens with disinterested economic insight (which coincidentally rationalized Wall Street’s wants).