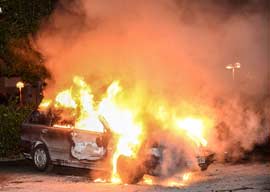 Last week saw prolonged riots in Sweden and a surreal midday beheading in England, while the paid parrots of the Multi Cult spared no effort in blaming everyone but the rioters and the murderers.

Sweden has long been held up by naÃ¯ve proponents of statist socialism as a blonde, suntanned example of how high taxes and cradle-to-grave welfare are effective. This has always been a simpleminded delusion that ignored the Scandinavian nation’s small population and”until recently”ethnic homogeneity. But now an estimated 15-20% of Sweden’s population consists of foreign-born immigrants, and deep wrinkles are starting to appear in the country’s Big Brother smiley face.

After Swedish police shot dead a Portuguese immigrant who was variously reported to be aggressively wielding either a machete or a knife on May 13, disgruntled immigrants used the incident as an excuse to smash and loot and burn and beat their way through Stockholm and its environs over several nights. Much of the mayhem took place in Stockholm’s Husby district, where an estimated 80-85% of residents are not indigenous Swedes. Automobiles were torched, windows were smashed, and a policeman was beaten while a joyous child filmed it and exclaimed “Allahu Akbar!”

“Last week saw prolonged riots in Sweden and a surreal midday beheading in England, while the paid parrots of the Multi Cult spared no effort in blaming everyone but the rioters and the murderers.”

In the London district of Woolwich last Wednesday afternoon, a pair of English-born black Muslims rammed their car into a white British soldier who was wearing a “Help for Heroes” T-shirt, then proceeded to stab, slash, and behead him with a machete and a meat cleaver. His hands warm with his victim’s blood, murder suspect Michael Adebolajo”who was reportedly born into a Christian family but later converted to Islam”delivered the following soliloquy to a passerby who was filming him:

The only reason we have killed this man today is because Muslims are dying daily by British soldiers, and this British soldier is one, is a eye for an eye and a tooth for a tooth. By Allah, we swear by the Almighty Allah we will never stop fighting you until you leave us alone….I apologize that women had to witness this today, but in our land our women have to see the same. You people will never be safe. Remove your governments. They don’t care about you. Do you think David Cameron is gonna get caught in the street when we start busting our guns? Do you think the politicians are going to die? No it’s going to be the average guy, like you, and your children.

In Sweden, England, and elsewhere, the excuses came quickly and predictably.

Rumors spread like fire through charred Volvos that Swedish police had used slurs such as “rats,” “monkeys,” and “niggers” to taunt and inflame the rioters, although it has been alleged that the latter term may have actually been neger, the Swedish equivalent to “Negro.”

Swedish Integration Minister Erik Ullenhag noted that there was “discrimination in these areas” where the riots occurred. Swedish Justice Minister Beatrice Ask tried explaining that “Social exclusion is a very serious cause of many problems, and we understand that.”

No one seemed to note that Sweden boasts one of the cushiest social safety nets on Earth and that in nearly all cases, the immigrants enjoyed a level of safety and prosperity completely unknown to them in the homelands from which they fled. None dared to point out that whatever wealth they accrued at the expense of indigenous Swedish taxpayers was highly “unequal” compared to the meager existences they”d scratched out in Somalia and Afghanistan.

Although Swedish police adopted a non-intervention policy when dealing with most rioters, it did not stop meter maids from issuing tickets to the owners of cars that had been torched.