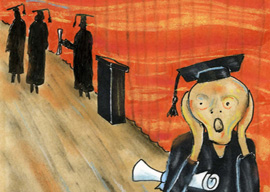 Recently I commented on a blunder by Pennsylvania Governor Tom Corbett, who suddenly wimped out after having proposed cutting 20 to 30 percent out of the state’s allocation for “higher education.” Corbett had a chance to do good by making our state universities cough up more of their own funding.

In constant dollars, our state and onetime private “institutions of higher learning” charge nearly four times more than what my parents and I paid for my college education in the early 1960s. There are multiple reasons for these swollen costs. One is the availability of government loans, which allow colleges to raise tuitions astronomically. Another is the demand that young people acquire a BA before they can secure employment. Administrative layers have also been piled on universities since the 1960s, sometimes mandated by the government to fight alleged discrimination against designated minorities. All these subinfeudated deanships cost megabucks, which naturally get passed on to the consumers.

Adding to the tab is the Club Med flavor of modern college life, which now entails Jacuzzi baths, high-definition TVs in every building, and exercise machines galore. Dining in these resorts is no longer an austere, monastic experience. Collegiate eating areas offer a wide variety of culinary choices, including lots of junk food to please the adolescent palate.

“Colleges wish to make their activities at least appear to be educational.”

Colleges work hard to devise “new forms of learning” to make themselves competitive as “educational institutions.” The kids are customers rather than novices at the temple of learning, while the faculty members are glorified resort facilitators. At most colleges, particularly those that are tuition-driven, mountains get moved to accommodate the kids. At the same time, colleges wish to make their activities at least appear to be educational.

There are other complicating factors. Most people, according to Charles Murray and other serious researchers, do not have enough intelligence to perform at a true college level. Learning foreign languages, studying theoretical science, doing mathematical equations, and engaging in abstract reasoning are not everyone’s bag because only a minority of our population has the necessary cognitive gifts.

But those who are not cognitively qualified or who manifest no interest in books still want to go to college, and they can usually obtain the requisite funds to fulfill their wish. How then do you keep these customers happy once they arrive?